The Inexorable Tragedy (by himself)

Ordering humans to be killed

The Black King (黒王 in Japanese) is the leader of the Ends and the main antagonist of the manga and anime series Drifters.

A long, hooded cloak conceals his face and his long robe covers most of his body save for his arms and hands, both of which bear a number of scars. The most curious of the scars is a circular marking centered in the palm of his right hand. He also often carries a wooden staff topped with a dragonfly.

Because his identity is unknown, his presence is always accompanied by a dark and mysterious aura. He shows himself to be a charismatic leader, having earned the unwavering loyalty of his allies and subordinates and is a genius military leader and civilization builder.

He holds a deep-seated hatred toward the humankind, which denied his offer of salvation (and which also probably cost him his life and humanity), and for this reason he decided to side with all non-humans as the Ends and other monsters against the humans and anyone who would dare to help them, including the Drifters, the Elves, the Dwarves and Octobrist people (magicians who aid Drifters).

His goal is to build a civilization of non-humans that rivals the accomplishments of the civilizations founded by humans, whom he believes to be cruel and oppressive (a stark contrast to the thinking of his archenemy and the leader of Octobrist Abe no Seimei, who believes in the goodness of humanity and has no intention of starting a war between them and the non-humans.

However, despite this pessimistic view of humanity and the ensuing maltreatment of them on his part (such as a mass slaughter of innocents and the abuse of human prisoners until their eventual deaths), the Black King has at times shown himself to have a good side as well, and is capable of kindness. He looks after not only the Ends but also his soldiers, healing their injuries and granting them the resources they need without hesitation.

The Black King's true identity is currently a mystery, but like all his fellow Ends, he is apparently an individual from human history, whose traumatic near-death experience caused him to become completely misanthropic towards all other humans, resulting in his goal to purge mankind he once attempted to save.

He first appeared when he invade the castle Abe no Seimei used to aid the Drifters.

He then makes his next appearance to order his Ends to hunt down the Drifters.

Although the Black King has yet to be shown in engaging combat directly, he has already proven himself to be one of the most powerful characters in the series, with abilities that far surpass those of the beings around him (be they human or non-human), including Abe no Seimei, a famed and legendary Onmyou sorcerer. They include not only such offensive powers as those demonstrated when he crippled the Bronze Dragon in one shot to an inch of its life, but also defensive powers such as healing, duplication (e.g., wood and wheat) and telepathy, all of which can at times lead others to think of him as something akin to a god. However, the Black King dismisses this notion, claiming that he lacks the immortality needed to be a deity in the truest sense of the word. This is later shown to be true, as he is slowly turning to salt, though he keeps it a secret from all. Rasputin however, notices and suspects Black King's said secret, and later orders non-human soldiers to salvage, eat and drink from dead humans in an effort to ease Black King from using his powers more often than he should.

In addition to his supernatural abilities, the Black King has also shown himself to be a genius strategist, able to teach the non-humans of the fantasy world how to build their own culture, economy and military. In fact, Minamoto no Yoshitsune has described him as a "multi-world expert".

The Black King, obviously in spite of a being from ancient era, also knows the "Descent" tactics, concept of airborne assault, military call signs, coordination numbers, instant communication, using the maneuver of flying transports dropping soldiers into the battlefield. This military tactic was introduced by Nazi Germany in World War II in 20th century, military concepts far, far ahead of his time. One of his newly initiated Ends member, Akechi Mitsuhide, is shocked that how does Black King all these never-before-seen (in his time) strategies and tactics.

One of The Black Kings main abilities, it gives him the ability to duplicate any living cell whether it be plant or animal. This has been seen used in several ways the first being the ability to heal any wound. Another use is the duplication of crop seeds and wood. The ability also has offensive capabilities as it allows the Black King to cause rapid cell duplication resulting in cancer/leprosy being spread throughout the victim's body as seen with the Bronze Dragon.

Who could he be?

Note: To be updated as soon as Black King's identity is revealed.

It has been theorized and suggested by numerous fans that the Black King may be the biblical prophet Jesus Christ. Reasons behind this idea are based on the scars on his arms (in Bible he is said to have gotten them by lashes) and this particular one is curiously at the center of his right palm (his left palm has yet to be seen, however), which seems to have bore from a punctured wound by possibly a large nail or a stake. Also, according to his backstory, he once tried to save humans, but they "denied" him. This could mirror Jesus' interactions with the Romans, who were against the religion he was preaching (Christianity) and Jews who purportedly turned their backs on him. His ability to heal grievous wounds and multiply a meager amount of food into huge amounts are also abilities shown by Jesus in the Bible. Additionally when Bronze Dragon was subjugated by Black King the dragon's flesh and tissues began to fall off in chunks, hinting that Black King inflicted the dragon with leprosy (even though cancer is the result of out-of-control cell multiplication). And leprosy is mentioned in the Bible.

However, the dragonfly staff he carries is something to diminish above claims by wide margin: for nowhere in the Bible a dragonfly is mentioned. Nor is a dragonfly hold a significant symbol, but in Japan it does mention about a dragonfly sitting on a staff. Plus, Black King does mention about only advancing and no retreat, inexorability, and the fact that majority of main characters from both factions are centered around Japanese people, it is possible that Black King could be a Japanese figure. 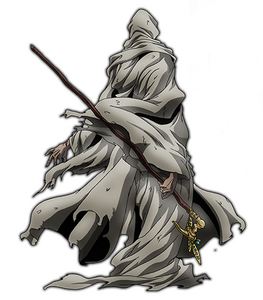 Add a photo to this gallery
Retrieved from "https://villains.fandom.com/wiki/Black_King_(Drifters)?oldid=3144808"
Community content is available under CC-BY-SA unless otherwise noted.