Catering to Sephiran's every whim.

Surpass Gawain in his glory days.

Finish Ike off (both failed).

Zelgius, usually under the guise of the Black Knight, is a recurring antagonist in Fire Emblem: Path of Radiance and Fire Emblem: Radiant Dawn. He wields the sword Alondite and wears armor blessed by Ashera. He cannot be harmed by normal weaponry.

The alter-ego of Begnion's Military Commander, Zelgius, he was born a Branded (half-beorc and half-laguz), and ages more slowly due to his laguz blood. He wears his famous armor to disguise this fact from his fellow Daeins, who despise both the laguz and the branded.

He was trained by General Gawain (also known as Greil), whom he has always wanted to best in a duel to prove his strength. Even after Gawain left Daein, the Black Knight remained in service of the Mad King Ashnard. He is eventually approached by Sephiran, the Prime Minister of the Begnion Empire. Zelgius becomes commander of the Begnion Central Army while the Black Knight remains the strongest of Daein's Four Riders. He uses warp powder to get from place to place. Although he has sworn loyalty to Daein, by the time the series begins, he is loyal only to Sephiran.

By chance, he meets his old teacher in Gallia shortly following the Daeins' invasion of Crimea. The two partake in a duel in which he offers Greil the sacred sword, Ragnell. Greil does not take the sword, because he obtained an injury to his wrist causing him to no longer be able to wield swords. The Black Knight is unaware of this and defeats him in the duel anyway. After killing Greil, with Greil's son Ike watching, he is not satisfied. Had his old mentor's skill diminished over the years.

Ike swears to kill the Black Knight for what he has done. They meet many times throughout Fire Emblem: Path of Radiance. General Zelgius leads Begion troops to capture Daein and Ike even thinks he is "trustworthy enough". Of course, he did not know that these two are one in the same. Only after Ike obtains Ragnell do the two finally duel at Naddos Castle. At this time, Ike explains Greil's injury to the Black Knight's distaste. After Ike has defeated him, the castle collapses on top of him.

The Black Knight didn't actually die. He appears three years later in Daein during its occupation by Begnion. He assists the Dawn Brigade in overthrowing Begnion's rule of their country. He spends the rest of the game aiding Michiah as the Black Knight and leading the Begnion army as Zelgius. A laguz named Ranulf discovers the link between the two and divulges this information to Ike.

After the Goddess wakes, he then waits in the Tower of the Goddess until Ike appears. The two duel and Ike truly defeats him. As he lay dying, he tells Ike that he saw Gawain in his swordsmanship and is at peace knowing he has truly fought his mentor once more.

The Black Knight appears as a usable unit in the mobile game Fire Emblem Heroes. He is the third Armored Sword Unit and the first Armored Unit to be distributed as a Temple Trials unit. He is a powerful unit being able to not only tank attacks, but can dish out powerful attacks as well, thanks to a combination of Alondite, granting him Distant Counter, and his own unique Special Skill, Black Luna. He appears as both as the Black Knight and as Zelgius, the former can also be obtained in a $3.99 USD bundle which includes 12 Orbs, 12 Stamina Potions, 12 Light's Blessings, and 1 5-Star Black Knight. Jokingly, fans have compared it to a fast food combo, and due to the Black Knight having the same abbreviated letters as it, dubbed it a "Burger King Meal".

The Black Knight first appears in Super Smash Bros. Brawl as a trophy and a sticker, the latter of which boosts any fighter's launch power. He is also referenced in the playable song "Against the Dark Knight", a song which plays on the Castle Siege stage.

In Super Smash Bros. Ultimate, The Black Knight gets upgraded to an assist trophy. As an assist, he slowly moves around the stage while attacking nearby opponents with Alondite, his sword. His armor is again a Costume for the Mii Swordsman. Robert Clotworthy and Junji Majima return as the voice actors of Black Knight by using recycled voice clips from Fire Emblem Heroes.

The Black Knight also appears in Ultimate as two primary attack spirits, one based on Zelgius as an ace class and the Black Knight as a legendary class. As Zelgius, his Spirit Battle is a Stamina Battle against a Mii Swordfighter with the Black Knight costume. He has super armor and has increased power to his smash attacks. At level 99, Zelgius can be enhanced to the Black Knight, who grants the ability "Armor Knight", increasing the player's strength and defenses at the cost of reducing movement speed. 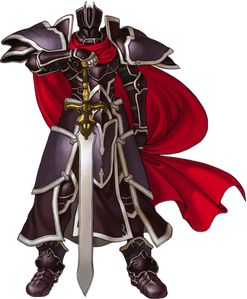 The Black Knight in Fire Emblem: Path of Radiance. 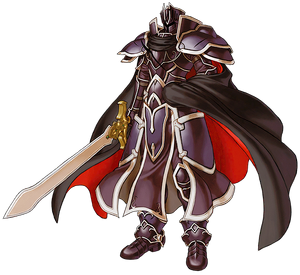 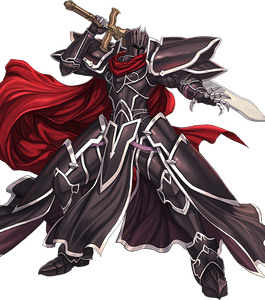 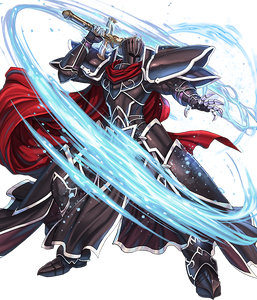 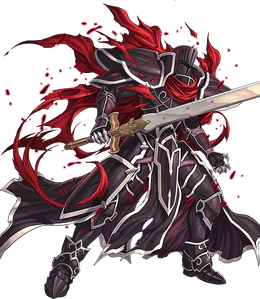 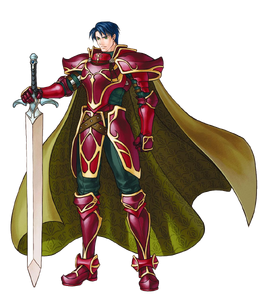 The Black Knight as General Zelgius. 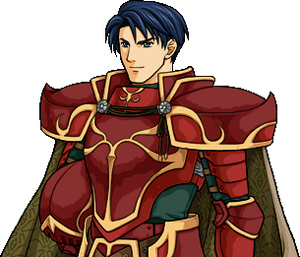 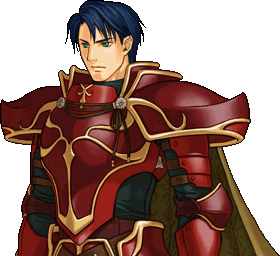 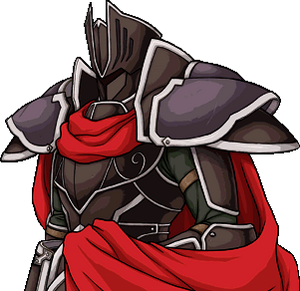 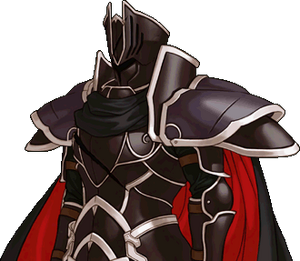 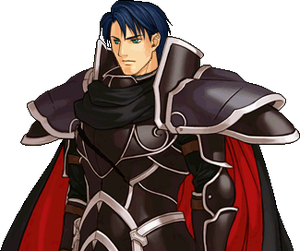 Retrieved from "https://villains.fandom.com/wiki/Black_Knight_(Fire_Emblem)?oldid=4089878"
Community content is available under CC-BY-SA unless otherwise noted.