Guardian of the Bridge

Kill anyone who dares to cross the bridge, including King Arthur (failed).

The Black Knight is a famous minor antagonist in the 1975 iconic classic British comedy film Monty Python and the Holy Grail​. He is a rogue knight clad in black, as his name suggests, who guards a tiny bridge for unknown reasons, challenging those who pass by to a duel, and then killing them. Although supremely skilled in swordplay, the Black Knight suffers from unchecked overconfidence and a staunch refusal to ever give up.

He was portrayed by the Monty Python member John Cleese, who also played the French Taunter in the same film and King Gristle Sr. in DreamWorks' Trolls. When reduced to hopping on one leg, the Black Knight was portrayed by local blacksmith Richard Burton, who actually did have a missing leg.

However, even at this, the Black Knight refuses to stand aside, insisting "Tis but a scratch.", to which Arthur says "A Scratch? Your arm's off!" The Knight says "No it isn't." and Arthur asks about his severed arm, to which the knight says "I've had worse." and fights on. Next his right arm, which had been holding his sword, is also severed, but he still doesn't concede. As the knight is literally disarmed, Arthur assumes the fight is over and kneels to offer a prayer to God as thanks for his victory. The Black Knight interrupts Arthur's prayer by kicking him in the side of the head and accusing him of cowardice; when Arthur points out his injuries, he insists "It's just a flesh wound." In response to the continued kicks and insults, Arthur chops off the Black Knight's right leg. At this point, Arthur is extremely annoyed at the sable-armored warrior's persistence, and asks the amputee if he is going to bleed on him. The knight replies by proclaiming that he's invincible, to which the Arthur replies that he's a loony. Arthur finally cuts off the other leg. As Arthur puts his sword away, the knight offers to call it a "draw". Arthur summons Patsy and rides away, leaving the amputated villain to scream threats at him ("Oh I see; running away, eh? You yellow bastard! Come back here and take what's coming to you! I'll bite your legs off!"), whereupon the scene fades out.

It's unknown what happened to the Black Knight afterwards, but it is likely that he bled out and died from his injuries off-screen.

While the Black Knight may have proved skilled in other battles such as his skirmish with the Green one, he was simply out skilled when dealing with King Arthur. But, nevertheless, nigh-unstoppable in sheer determination, few villains have been as steadfast in their goals as this man, surviving wounds that would kill an ordinary man. But this fearless knight did all in his somewhat limited power to make good on his promise that "none shall pass". 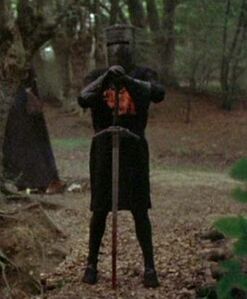 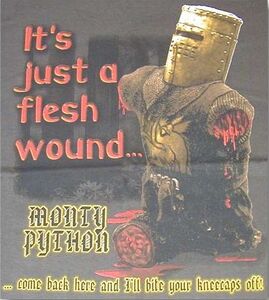 The Black Knight's arm is cut off. 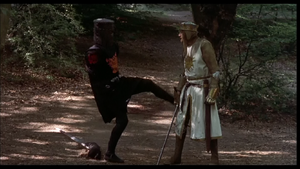 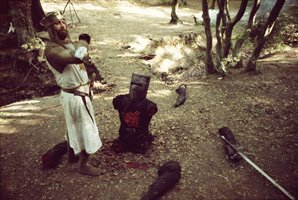