Black Knight is one of the bosses in the recently famous indie game Shovel Knight. He serves as the evil to Shovel Knight's good.

The Black Knight appears as the first enemy in the game where he taunts the Shovel Knight and then fights him where he is defeated and is forced to retreat. He appears again with the Enchantress where she tries to convince him to join where he refuses too.

She leaves and the Shovel Knight appears again where they once again fight with him losing and having to retreat again. At the Tower of Fate, she tries to convince him to join one last time where he refuses. She then curses him with a spell into a brainwashed minion with great power. He is freed by this from once again being defeated by Shovel Knight where it is revealed he too is trying to save Shield Knight.

Near the end, while Shield Knight holds of The Enchantress, who had wounded Shovel Knight during battle, he appears once more to try to save them both. Shield Knight tells him to get Shovel Knight and leaves. At first, he doesn't want to leave her behind, but she convinces him to do it. That, and she is running out of strength. He complies and leaves with Shovel Knight where he leaves him by campfire and leaves.

Black Knight is shown to be a mirrored version of Shovel Knight at first. He is shown to be a rude bully whose goal seems at first to just one-up him. As the story continues, it is shown that he is a lone wolf, refusing to let anyone else call him a soldier. In the end, though, it is also shown that his only goal was to save Shield Knight herself. When Shovel Knight is wounded and already has saved her, he has a change of heart and saves him. 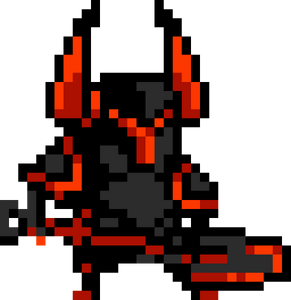 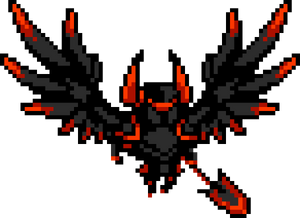 Retrieved from "https://villains.fandom.com/wiki/Black_Knight_(Shovel_Knight)?oldid=3770763"
Community content is available under CC-BY-SA unless otherwise noted.