Jeremiah Wickles (Scooby-Doo, Where Are You?)

Cunning
Ability to move sword without touching it (in Scooby Doo 2: Monsters Unleashed)

Keep his art forget and kidnapping crimes a secret.

The Black Knight Ghost is a recurring antagonist in the Scooby-Doo franchise. It is a persona adopted by Jeremiah Wickles to assist in his art swindling scheme, which would later become it's own character in various subsequent adaptations. He is also notable for being the first monster Mystery Incorporated ever faced.

What a Night for a Knight

In "What a Night for a Knight" he first appeared, alongside the five main characters, in the pilot episode of Scooby-Doo, Where Are You!. He was clad in suit of black armor and was voiced by the late Bob Papenbrook. Shaggy Rogers and Scooby-Doo found the mysterious black knight that the kids return to the museum. When there, they discover the archaeologist delivering the knight is missing, and the knight has come to life. The man behind the Black Knight Armor was the curator Jeremiah Wickles (also known as Old Man Wickles), who was using the legend to cover up his art forgery scheme.

Hassle in the Castle

In a later episode, "Hassle in the Castle", there is a suit armour similar to the Black Knight costume used in Fred's trap to catch the Phantom of Vasquez Castle.

He is the first boss of the Nintendo 64 version of the 2000 videogame Scooby-Doo! Classic Creep Capers which is a re-telling of his appearance in What a Night for a Knight.

He is also the first boss of the 2002 videogame Scooby-Doo! Night of 100 Frights, He is one of the monsters brought back by the Mastermind and is keeping Velma Dinkley locked in a wooden cage. Scooby must defeat the knight to save Velma.

He appears in the 2004 live-action Scooby-Doo movie Scooby-Doo 2: Monsters Unleashed as a major antagonist. He is the second monster to be brought to life by the Evil Masked Figure, (the first one being, the Pterodactyl Ghost) along with the 10,000 Volt Ghost and sneaks into Old Man Wickles' manor to await Mystery Inc.'s arrival. He battles Daphne Blake in the manor, using his ghostly sword. He is defeated by Velma who locates his weakness and kicks him in the groin he groans and refers to his testicles as his " round tables". He later appears to battle Fred Jones in a joust, riding a horse while Fred uses a motorbike. The Black Knight and 10,000 Volt Ghost then corner Fred and Daphne. Daphne uses some jumper cables to absorb all of the 10,000 Volt Ghost's electricity into the Black Knight, causing him to explode and be defeated, his charred head rolls across the ground and exclaims his mistake with' "Oh, crap!". It is assumed that the Black Knight Ghost's head turned back into a costume after Scooby-Doo turn on the control panel which convert all of the monsters back into lifeless costumes.

This incarnation was portrayed by Kevin Durand (who also played Mika in The Captive, Blob in X-Men Origins: Wolverine, Ricky in Real Steel, Setrakus Ra in I Am Number Four, and Frederick Gideon in Locke & Key), and voiced by the late Bob Papenbrook.

He is also an enemy in the videogame based on Scooby-Doo 2: Monsters Unleashed.

He is a common enemy in the 2005 videogame Scooby-Doo! Unmasked. He can be found in the Medieval Exhibit Level.

In the 2008 movie Scooby-Doo! and The Goblin King, His costume is seen in Mr. Gimbles' magic shop.

He appeared during the opening credits of the 2013 movie Scooby-Doo! Mask of The Blue Falcon, where he chased Scooby and his friends along with the Ghost Clown, The Miner 49er, The Ghost of Redbeard and The Space Kook.

Scooby-Doo! And The Curse of The 13th Ghost

The Black Knight appears in the 2019 film Scooby-Doo! And The Curse of The 13th Ghost. After Scooby and his friends are forced to stop solving mysteries, They hold a garage sale and sell moements of their old mysteries and the Black Knight armor is one of those objects.

The Black Knight recently appeared in the opening of the 2020 film, Scoob!

In the 2022 Webseries Mystery Incorporated, The Black Knight appeared as a villain at the end of episode 1, "Welcome to Coolsville, in which he kills a high school student. He is set to appear as the main antagonist of episode 2, "What a Night for a Knight" (named after the fisrt episode of Scooby Doo Where Are You). 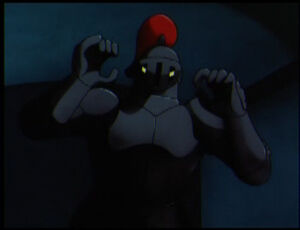 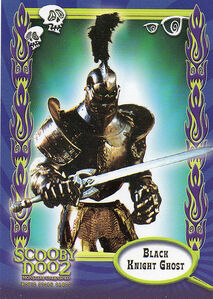 The Black Knight Ghost as he appeared in Monsters Unleashed 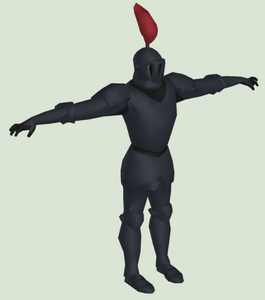 The Black Knight Ghost as he appeared in Scooby-Doo! Night of 100 Frights