Annihilate the Sailor Senshi to further strengthen the Malefic Back Crystal's evil energy for Wiseman.

Black Lady, or Wicked Lady, is the evil adult version of Chibiusa Tsukino that was created after Wiseman used the Malefic Black Crystal to corrupt her.

She was voiced by Misato Fukuen in Japanese and Liz Brown and Sandy Fox in English.

Wicked Lady looks like an adult version of Rini; however, her hair is much longer and similar to Sailor Moon's. She is also slightly shorter than Sailor Moon. She wears a long black dress with a slit on each side. The sleeves and chest portions are organdy.

The fabric of her skirt is also the same colour as the shawl that is often seen with. The collar and sleeves cuffs also have diamonds on them and her footwear consists of high heels. She also a pair of black crystal earrings that are actually the Evil Black Crystal.

In the manga, Chibiusa goes to the Door of Space-Time after remembering how everyone in Crystal Tokyo had teased her and how she met Sailor Pluto. However, she sees that Pluto is happy and thinks that no one needs her anymore. She tries to return to the 20th Century but unknowingly drops the key in the process and as it is needed to travel through time, they can't be seen or heard from if they are warped into the hole.

Chibiusa remembers the key and Wiseman appears, pretending to be her ally and comforting her by saying that he needs her. He takes her hand and Chibiusa complies before a space-time storm occurs. Pluto knows that Chibiusa has caused this as a result.

Later on in the arc, an adult who strongly resembles Chibiusa appears by Wiseman as a shadow. She introduces herself as Black Lady during the beginning of Act 24. She quickly discards Luna-P and regards it as a foolish toy before she attacks the sailor guardians, hypnotising Tuxedo Mask in the process.

Sailor Pluto arrives to assist Sailor Moon in stopping Prince Demande from bringing both the past and future Silver Crystals together into contact as it would have destroyed everything. She manages to stop time but she dies as a result. Black Lady sees this and mourns her death, realising that she is loved and cared for. The Evil Black Crystal breaks and triggers her transformation into Sailor Chibi Moon.

In the first anime adaptation, Wiseman tells Rini that all of the people on Earth never loved or cared about her and even in her timezone, they believed that she was a criminal that caused the destruction of Crystal Tokyo. Due to this, Rini became the perfect person to be absorbed by the Dark Crystal and she became the Wicked Lady.

Luna-P had also been transformed into one of Wiseman's minions as well and when Black Lady touches it, the moon crescent turns into the one used by the Negamoon Family. It becomes uses to fight against the sailor guardians.

After a few failed attempts to get Black Lady to revert back to Rini, Sailor Moon used the Silver Crystal to transform into Neo-Queen Serenity, reminding her that she was always loved and remembered by them. Black Lady eventually believed her and the power of the Silver Crystal turned her back into her child self again.

The Black Lady serves as one of the bosses in the video game Sailor Moon: Another Story, though ironically that it is Chibiusa that has to battle her yet they appear two different characters this time around. 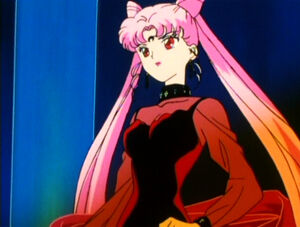 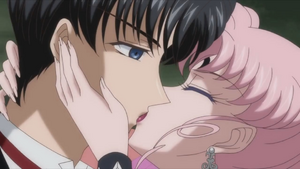