Male and female crocodiles (I)

Eat what they can to survive.

Man-Eating Predators
The Black Lake Crocodiles are enormous and very aggressive crocodiles, and the main antagonists of the Lake Placid film series. They are generally fed by the Bickerman Family.

In the first film, a Male and a Female Crocodiles are the main antagonists.

A couple of saltwater crocodiles somehow arrived at Black Lake in Maine, possibly by migrating from a location across the Pacific Ocean. They are discovered by Bernie and Delores Bickerman, who decided to feed them, considering them as their pets. One day, the crocodiles devoured Bernie but Delores continued to take care of them.

Two years later, one of the crocodiles devours officer Walt Lawson, therefore a team comes to Black Lake to investigate. They become aware of the existence of the crocodiles after they see the Male devouring a Grizzly Bear. Shortly after that, they see Delores feeding the Femalewith a cow so they oblige her to tell them everything. Later, the team members decide to trap the crocodile by luring him outside the water with a cow and then capture him. They finally manage to capture the Male, however the Female attacks them soon after but she is blown up by a grenade launcher. Unknown to them, Delores continues to feed of the four offsprings of the two crocodiles.

In the second film, the four infants crocodiles Martha, Max, George Jr. and Gracie are the main antagonists.

The four crocodiles eventually devoured Delores, but her sister Sadie inherited her house and continued to feed them. A few years later, the crocodiles eats several inhabitants and tourists of Black Lake, therefore Sheriff James Riley comes to investigate along with Officer Emma Warner and hunter Jack Struthers. The crocodiles also attack a group of teenagers, including the sheriff’s son Scott, and kill many of them. However, the sheriff and his teammates ultimately manage to kill the crocodiles one by one.

In the third film, five crocodiles appear and their Alpha is the main antagonist.

In the fourth film, a large number of crocodiles are present and are again the main antagonists.

Due to the crocodiles' presence, a military corps puts up an electric fence around Black Lake to contain them. However, a group of poacher led by Jim Bickerman trespasses in order to capture crocodiles and to steal eggs, but most of them are killed. A group of students also accidentally enters inside the fence and are attacked by the crocodiles. Many people are devoured, but a few survivors manage to escape alive. Some times later, the crocodiles are presumed to have all died of starvation, but a crocodile still alive is seen attacking a woman.

In the crossover fifth film, several crocodiles appear but they share the role of main antagonists with the Anacondas.

Jim Bickerman is hired by Sarah Murdoch to return to Black Lake and capture one of the crocodiles, in order to create a hybrid with some Anacondas. Jim successfully captures a crocodile and places him in a laboratory truck, however he manages to break out and frees the three anacondas also present. The truck thereupon explodes, which damages the fence and allows the reptiles to escape. Sarah sends some mercenaries to recapture the crocodiles and the snakes, but the crocodiles devour several of them. Later, they also eat many sorority girls at the beach of Clear Lake, however they are eventually confronted to the anacondas. Several animals of both species fight the other, but the snakes manage to kill most of the crocodiles.

In the sixth film, a mutant crocodile appears as the main antagonist, ignoring the events of the previous films and not featuring the Bickerman Family.

The crocodile is a hybrid of a Black Lake Crocodile and the extinct species Purussaurus brasiliensis, planned to be used as a biological weapon.

As the movie starts, Gomez is attacked and killed by an unknown assailant. A group of activists, Jade, Alice, Sam, Billy and Spencer, travel to an island that appears to be in the middle of an old research facility within a lake, as a challenge by their old friend Dane. The group, along with two boat rangers, Pennie and Travis, come across Gomez's corpse on a tree.

The group attempts to leave, but the crocodile attacks the boat and makes it drift into the lake, with Travis inside, causing Pennie to be dragged into the water by a rope. The crocodile attacks and kills Travis, while the others help Pennie to escape. The group enters the facility, and is forced to split up after another attack. As the group continues attempting to leave, the crocodile murders most of it, which includes dragging Spencer into the water and devouring him, attacking and killing Pennie in a tunnel, decapitating Billy, brutally killing Dane, killing Henderson, who was trying to capture it, and killing Sam, who was unsuccessfully attempting to sacrifice himself to kill the crocodile. The crocodile finally meets its demise when Jade traps it with an excavator, then igniting the excavator's fuel and causing an explosion, killing the crocodile.

However, the ending of the film reveals to have a second crocodile, as Jade and Alice's fate remains unknown.

One of the crocodiles' main behavioral traits is their coordination. They work together to maximize their kill precision. Additionally all the crocodiles are adept stalkers, which combined with their coordination en-mass makes for some extraordinarily dangerous and deadly predators. When they do strike, all their force is focused on the initial attack and once finished each crocodile reenters their stealthy positions to repeat the process. In Lake Placid: The Final Chapter sheriff Reba and group of people found evidence that crocodiles had become cannibalistic. They started eating each other because their food supply ran low - leading to bigger crocodiles eating a smaller ones. 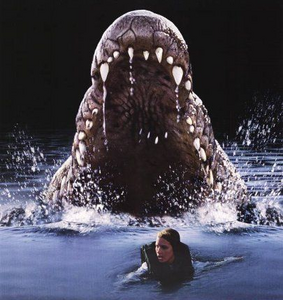 Retrieved from "https://villains.fandom.com/wiki/Black_Lake_Crocodiles?oldid=3789161"
Community content is available under CC-BY-SA unless otherwise noted.