Eradicate all living life in the DC universe.

The Black Lantern Corps are a major antagonistic organization from DC comics that are part of the Blackest Night crossover series - they are the reanimated corpses of deceased former DC heroes and villains returned to life with a black power ring and with the sole purpose of eradicating all living life in the DC universe on behalf of their god-like master, Nekron.

Nekron to birth the Black Lantern Corps into existence. The dying essence of the Anti-Monitor, flung into open space by Superboy-Prime during the Sinestro Corps War, was drawn to the long dead world of Ryut. There, it was encased within a black Central Power Battery by Nekron. Scar, a dying Guardian, secretly conspired against the universe and authored the Book of the Black. On Earth, a villain called Black Hand became increasingly aware of a black power within him.

Green Lantern Corps' confrontation with Agent Orange, the Black Hand became the herald of the Black Lantern Corps. At the same moment, a countless number of Black Rings began to emerge from the black power battery and search the universe for bearers. The Green Lanterns could not stop them as they simply broke through their shields like tissue paper. The Guardians of the Universe, knowing that the Blackest Night was upon them and could not be prevented, attempted to call a code black and summon all Green Lanterns back to Oa. However, Scar intervened and savagely attacked her fellow guardians one by one.

Black power rings descended upon the dead all over the universe, but especially in Earth's solar system. One breaches J'onn J'onzz's tomb on Mars, reanimating the Martian Manhunter. He flew to Gotham City and attacked Hal Jordan and Barry Allen. Reanimated corpses of Elongated Man and Sue Dibny ambushed and killed Hawkman and Hawkgirl, killing them both and revealing what the Black Lanterns were after. They were after the hearts of the living at the peaks of their emotions to power their black battery. Black power rings immediately reanimated Hawkman and Hawkgirl. The first Firestorm also became a Black Lantern. Aquaman rose from his grave, attacking Mera and Tempest along with the deceased Dolphin and Tula. Garth's hopeful heart was torn from him, and he became another Black Lantern while Mera escaped. More dead rose all over Earth. Kal-L rose from his grave, attacking Smallville. Deadman saw his own corpse rise. The Spectre's host, Crispus Allen, was even taken by the Corps. Don Hall proved to be the only dead the Black Lantern Corps could not take, because he was at such peace. Hank Hall was not such a problem to reanimate. The Doom Patrol was soon confronted by Black Lanterns Joshua Clay, Negative Woman and Celsius. Booster Gold was attacked by Ted Kord. Vril Dox met up with Black Lanterns Harbinger and Vril's wife Stealth. Justice League Detroit members Vibe and Commander Steel became a Black Lantern,as well as Outsiders member Katana's deceased family.

lsewhere, black power rings breached the Green Lantern tomb on Oa and reanimated all of their honored dead. Not only that, but Jade appeared before Kyle Rayner as a Black Lantern. Amon Sur rose from the dead, leading an army of deceased Sinestro Corps soldiers to Zamaron to confront Sinestro. On Okaara, Agent Orange and his Orange Light were surrounded by Black Lanterns risen from the dead of the Orange Lantern Corps, and black power rings rained down on Ysmault, where the Red Lantern Corps called home. The Black Lantern Corps was assaulting all of the lights of the Emotional Spectrum it could find with Scar directing the war from Ryut. Quickly, the Star Sapphire Corps on Zamaran fell. Then the Indigo Tribe appear, finally making the Indigo Light of Compassion known. Scar commanded that every Black Lantern that could be spared to go after the Indigo Light.

Black Lanterns' Central Battery reached 100% capacity. It then transported itself from Ryut to Coast City on Earth, where Nekron rose. Earth's heroes assembled to fight him, and soon they were joined by Lanterns representing every color in the Emotional Spectrum. None of them could stop Nekron and his Black Lantern Corps. The attempts to destroy the Central Battery appeared only to make it even stronger. Nekron claimed that none of the resurrected heroes had truly escaped death. He allowed them all to return and kept them connected to him. The rise of an apparent Black Lantern Batman succeeded in creating emotional tethers between Nekron and these resurrected heroes, unleashing more black power rings. Superman, Wonder Woman, Ice, Donna Troy, Kid Flash, Superboy, Animal Man and Green Arrow were all taken by rings and transformed into Black Lanterns. Rings also went after Hal Jordan and Barry Allen. Barry was able to flash himself and Hal two seconds into the future to avoid the rings. Wonder Woman, however, was set free from the Black Lantern Ring when a Star Sapphire Ring went upon her finger.

Though an exact list of the former Green Lanterns reanimated by black power rings doesn't exist, Kyle Rayner's ring states that all of the deceased Green Lanterns within the Oan crypt in Green Lantern Corps vol. 2 #39 are transformed into Black Lanterns.

The first black power rings possess no charge, but each time a Black Lantern kills someone and removes their heart, .01 percent power is restored to every ring in the Corps. In Blackest Night #3, Indigo-1 solidifies this theme by explaining that those who rise feed off emotion. Even at low power levels, black rings enable their user to fly and create black energy constructs. They are also unaffected by magic. In "classic" zombie fashion, the bite of a Black Lantern induces a slow-acting necrosis that eventually turns the victim into a fellow Black Lantern. It's unknown if this power can work on any living being, or only those characters who have been reanimated from death before (such as Superman, Green Arrow, and Donna Troy).

Black Lanterns are able to read the emotions as colored auras that correlate to the emotional spectrum. Multiple emotions read as a multi-colored aura, while unreadable emotions come out as white. Furthermore, demonic and underworld dwellers (such as Etrigan) are read with a black aura, apparently as unreadable as the white one due to their dead nature. A state of profound suspended animation is enough to fool a Black Lantern by making the target of suspended-animation invisible to the senses of the Black Lantern. Emotionless hearts such as the Scarecrow's render their bearers equally invisible to the Black Lanterns. When facing beings with warped mental states, or otherwise addled minds (such as Bizarro), the correlation between the emotion detected and the actual color that the Black Lanterns see is inverted. In addition to the abilities granted to them by the rings, Black Lanterns retain any superpowers they may have had in life. 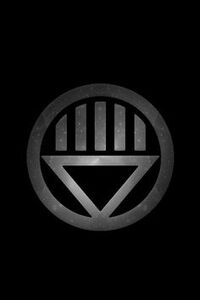 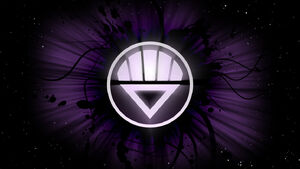 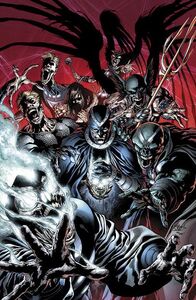 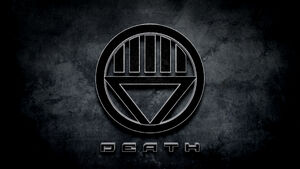 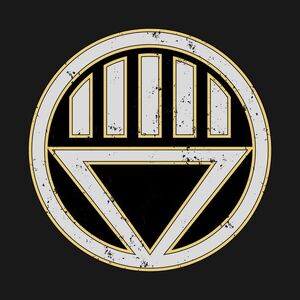 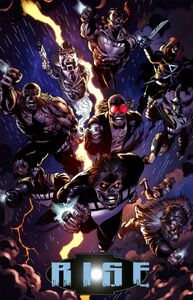 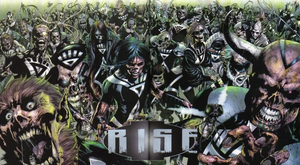 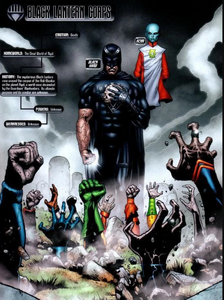 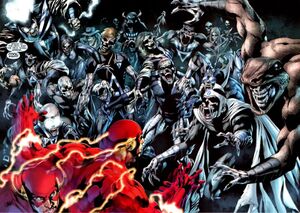 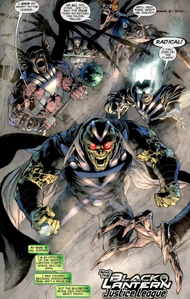 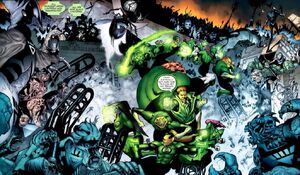 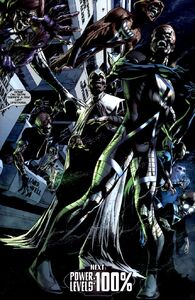 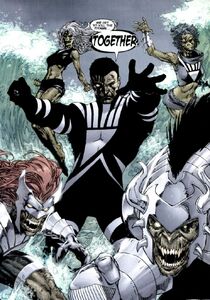 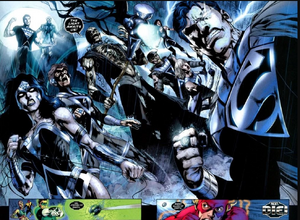 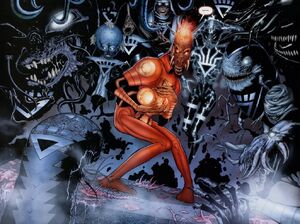 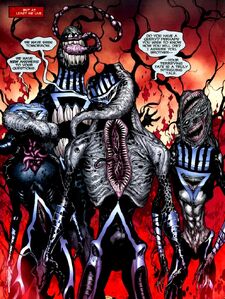 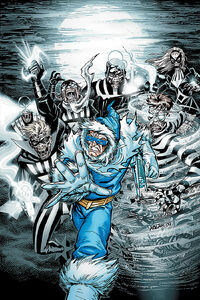 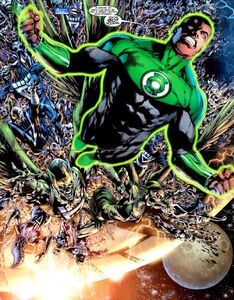 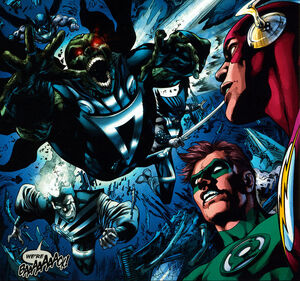 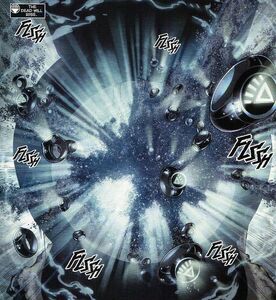 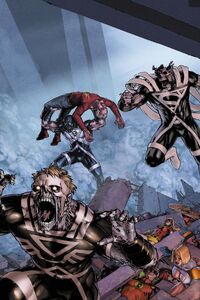