Black Mamba is a supervillain from the Marvel Comics. She is named after an infamous species of snake, which is fitting as she can also be a deadly opponent to any that stand in her way.

Tanya Sealy was born in Chicago. She was an ex-call girl, chosen by the Roxxon Oil Company to partake in a covert operation to retrieve the mystical Serpent Crown, working together with other snake-themed villains Sidewinder, Anaconda, and Death Adder. The executives at Roxxon decided to surgically implant a special component in her brain which enables her slight telepathic abilities. She also projects a cloud of energy known as darkforce. Using her combined powers to pluck the image of her opponent's loved one out of their mind and then suffocating them with the disguised darkforce, defeating Black Mamba was a definite struggle for the Fantastic Four's Thing during their first mission. She also battled Iron Man while searching for a powerful weapon known as the microscanner.

When Diamondback turned over a new leaf, it sparked something in Black Mamba. She joined her friends Diamondback and Asp in forming B.A.D. Girls, Inc. and worked several mercenary-for-hire missions. She also briefly served in Superia's all-female group, the Femizons, but betrayed the group to aid Captain America and Paladin. Regardless, she was a villainess and was not above committing questionable acts, such as when she led a drugged Hercules to be ambushed by the Masters of Evil.

For a time, Black Mamba served in Crimson Cowl's Masters of Evil in hopes of a large profit, battling the Thunderbolts. She eventually went back to the Serpent Society for a very short time, and then left to be with Diamondback and Asp and continue to undertake missions as the B.A.D. Girls. During one mission, to find the "Dominus Objective," Black Mamba severely embarrassed Deadpool when she revealed his darkest fantasy, to be given a back massage by his partner in crime, Cable (although her power similarly affected everyone she used it on in this appearance). She also fought Luke Cage and Iron Fist, and was shocked to realize her group had been hired by Cable himself. It is presumed that Black Mamba continues to serve with the B.A.D. Girls.

Black Mamba appears along with her friends Diamondback and Asp as a member of Captain America's anti-registration group, the Secret Avengers.

Black Mamba possesses the ability to project an inky cloud of extra-dimensional energy known as the Darkforce. This energy is manifested by Black Mamba as a limited quantity of viscous semi-solid matter. It is unknown how far Black Mamba can project this energy manifestation, but her control over it seems limited by her line of sight. It is also unknown how much of it she can manipulate at once: so far she has not been observed using it against more than one person at a time. Black Mamba uses the Darkforce (a process she refers to as "shedding her skin") to surround, constrict, and suffocate her opponents. The maximum amount of pressure she can generate through her Darkforce-projection is unknown.

However, the superhumanly strong Thing seemed unable to break its grip when he was encompassed by it. During the Superia crisis, after a suggestion by Captain America, Black Mamba discovered that she could surround herself (or someone else if they remained within her line of sight) with a cloud of darkforce, she could alter its appearance to disguise herself as someone else. Black Mamba also possesses some form of hypnotic power, enabling her to mesmerize her opponents into perceiving her Darkforce projection in the image of someone they love or trust. It is unknown how irresistible this ability is, but the Thing, Iron Man, and Captain America have proven susceptible to it. As part of the hypnotic illusion, her opponent imagines him or herself in the embrace of his or her self-chosen loved one, and the implausibility of the loved one's sudden materialization and provocative behavior is overwhelmed by the sensation of euphoria she triggers in most human brains, if one remains in the grip of her illusory Darkforce projection for too long, he or she will succumb to suffocation. The amount of time this takes varies according to the stamina and breath control of her opponent. The victim dies, however, overwhelmed by ecstasy. Black Mamba may need to be within line of sight of her opponent not to direct the Darkforce, but to use it in conjunction with her hypnotic power. 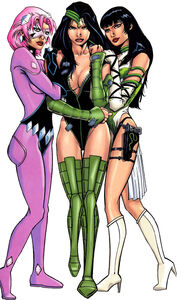 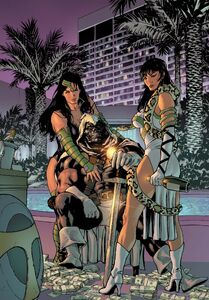 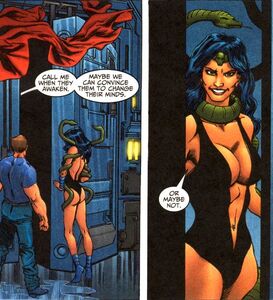 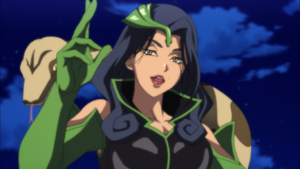