Take the riches of Atlantis for himself.
Conquer the seas.

He was voiced by Harry Lennix in Justice League: Throne of Atlantis, and Dave Fennoy in Suicide Squad: Hell to Pay, the latter of whom voiced Pong Krell in Star Wars: The Clone Wars.

In the Flashpoint timeline, Black Manta was an enforcer in Aquaman's Atlantean army alongside Ocean Master during his war against Wonder Woman and the Amazons, as well as the United States of America. His notable moment was showcasing his fighting skills as he faced off against Deathsroke were in Black Manta presumably killed him with his optic blasts. He is later killed by the combined efforts of Grifter and Batman shooting him to death in the face.

Out of costume, Black Manta first appears observing Arthur Curry with Dr. Shin, a scientist with theories that Atlantis exists. While the doctor tries to approach Curry immediately after witnessing his strength, Black Manta advises him to talk to Arthur in the morning. Black Manta then has Dr. Shin assassinated during an attempt on Curry's life. Later, in Atlantis, he and Orm meet with Queen Atlanna, Orm's mother, to persuade her into starting a war with the surface world. After she rejects their idea to attack the humans, Black Manta uses missiles loaded into his submarine to attack Atlantis, framing the surface world. Orm and Black Manta then demand that the Queen starts a war for the alleged act of terrorism from the surface. However, Queen Atlanta still refuses to strike and tells Manta to arrange a meeting with the Justice League to discuss a peace treaty.

After his men fail to kill Orm's half brother, Arthur Curry, Orm kills Queen Atlanta, and usurps the throne of Atlantis, once again framing the humans for killing his mother. After Orm becomes the "Ocean Master" and Arthur becomes "Aquaman", the Atlantean army wages war with the surface and the Justice League. Black Manta later faces off against Aquaman and has the upper hand until the end of their fight. Black Manta reveals to have manipulated Orm into starting a war with the surface and plans to kill Orm and claim the treasures of Atlantis for himself when the time is right. Just as he is revealing his scheme, Aquaman summons a great white shark from the harbor to attack Black Manta, biting the villain and bringing him into the ocean.

Black Manta resurfaces as a mercenary working for Amanda Waller. He briefly appears when he escorts the Suicide Squad to their mission through a custom submarine. 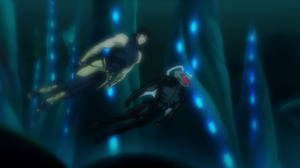 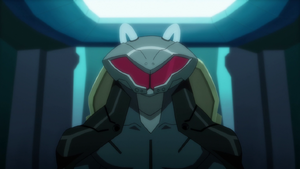 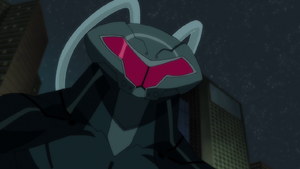 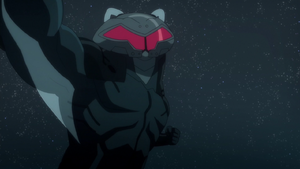 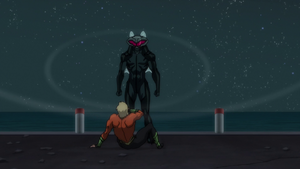 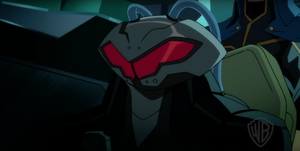 Black Manta in Suicide Squad: Hell to Pay.
Add a photo to this gallery

Retrieved from "https://villains.fandom.com/wiki/Black_Manta_(DC_Animated_Film_Universe)?oldid=3545692"
Community content is available under CC-BY-SA unless otherwise noted.