Flying Six of the Beasts Pirates

Have Sanji as a pet.
Get Nico Robin to join the Beast Pirates.

She was voiced by Yū Kobayashi.

Black Maria is a prominent and incredibly high ranking member of the Beasts Pirates lead by Kaido that occupy Wano Country. She is one of the Flying Six, the six most powerful members of the crew under only the commanding officers and their captain. She also is the owner of the Woman Trouble Brothel on Onigashima. Using both guile and her natural seductive skills, she captured Sanji whom she intended to keep as a pet.

An extremely tall woman, Black Maria stands at almost an exact 27 feet tall. She has long blonde hair with swords being part of its arrangement, and has bright blue eyes. She has red horns and has a kani of 女難 (kanji meaning "woman trouble") tattooed on her back.

When using her Devil Fruit, Black Maria's lower body below the waist turns into a gargantuan black spider, which curiously enough, has its own face.

Despite being a member of one of the most brutish and powerful pirate crews in the world who have a reputation for being ruthless, Black Maria herself is actually a very calm, composed, and elegant woman. She at first does not appear to be a sadist like the overwhelming majority of her crew, and unless something is directly required or ordered of her, does not engage in violence if it isn't needed. She has a highly flirtatious and sultry personality, and is even shown taking care of Momonosuke despite her captain being his family's archenemy. She treated the child's wounds and held him delicately after he was beaten, and has even been seen being very up close and personal with her captain Kaido in an affectionate manner.

However, when the need arises, Black Maria can become an incredibly vicious and merciless foe. She is more than willing to torture her enemies, and shows a real taste for sadism that belies her softer side. She is not above lying to her victims, and can show extreme brutality to her enemies even more so than what her crew is infamous for.

As one of the Tobiroppo, Black Maria is one of the top 10 most powerful members of the Beasts Pirates. Befitting her giant frame, she is exceptionally physically strong, as well as being extraordinarily cunning.

She ate an Ancient Zoan Devil Fruit, the Kumo Kumo no Mi, Model: Rosamygale Grauvogeli, which allows her to transform into a prehistoric spider. Being both a Zoan of the Ancient and Carnivorous subtypes, she is far better suited for combat than standard Zoan types. With her powers, she can create webbing that is immensely durable, strong enough to restrain someone as powerful as Sanji, a well as climb on walls and ceilings.

Black Maria also wields a giant polearm based on a wanyudo, a flaming wheel as the head complete with a demonic face on it. 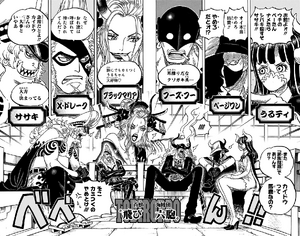 The Tobiroppo gathered together on Onigashima. 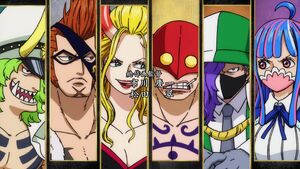 The Tobiroppo in the opening.
Add a photo to this gallery

Retrieved from "https://villains.fandom.com/wiki/Black_Maria?oldid=4377404"
Community content is available under CC-BY-SA unless otherwise noted.