Kill the Joker and Penguin in order to become the most powerful crime boss of Gotham City.
Kill the Red Hood and continue his operations in Gotham City after Batman's "death" (all failed).

He is the heir of the Sionis family, who inherited the fortune of his parents, after murdering them by burning down their mansion with them in it. When his company was saved from bankruptcy by Bruce Wayne, Sionis grew an immense hatred towards him out of envy. Developing a fixation for masks, Sionis carved a black one from his father's coffin and became the powerful crime lord known as Black Mask.

After losing a big part of his criminal empire during Joker's takeover, the reign that Black Mask had in Gotham completely ended when he gets killed by the vigilante known as Red Hood in Arkham Knight.

He is voiced by Nolan North in Arkham City, who also voiced Penguin in the same series and Merasmus, Blutarch Mann and Redmond Mann in Team Fortress 2. In Arkham Origins and Arkham Knight, he is voiced by Brian Bloom.

However, it is soon revealed that it is actually Joker masquerading as Black Mask that ordered the hit; after forcing a tied up Sionis to kill his mistress, kidnapping him and stealing his money, by staging a violent raid on Sionis' bank.

After Batman intercepts them at the bank, he speaks to the disguised Joker, believing him to be Black Mask. He warns him that the Joker is coming, only for Joker to have his henchman bring the real gagged Sionis. When Sionis insults Joker, Joker severely beats him and has his men drop Sionis into the back of his escape car. Joker then detonates a bomb within the bank and makes off with Sionis and his money. Joker then brings the captive Sionis to his own steel mill which the clown prince of crime promptly takes over, and has Sionis chained up deep within the mill.

Later after Batman tracks the Joker to the steel mill he comes across Sionis and frees him. Batman then begins to interrogate Sionis on the Joker's whereabouts, by breaking several of the fallen crime lord's ribs. Sionis however refuses to speak as he wanted the pleasure of murdering the Joker himself. Just as the Dark Knight was about to malfunction Sionis' pacemaker as an incentive, the assassin Copperhead attacks him. Sionis then makes his escape from the mill but not before offering the assassin anything she wanted in return for killing the Bat and making him suffer. However, Copperhead considers him a "fallen king", as she knows about the Joker, and therefore ignores his offer. Declaring that Batman and Copperhead were a 'couple of freaks' who deserved each other, Sionis took the opportunity to escape.

Much later after the Joker has been defeated and taken into custody, Black Mask takes back control of his criminal empire and almost immediately starts putting his highly toxic drugs back on the streets to be sold. Batman quickly puts a stop to Black Mask's resurgence to power, by destroying all of his drug stashes. After destroying the last drug stash, Sionis, along with a small group of his gang confronted Batman in the Gotham Church. Despite being outnumbered, Batman managed to defeat both him and all of his men. Black Mask is then taken into custody by the Gotham City Police and incarcerated in Blackgate prison.

Though Black Mask doesn't appear in the game Batman: Arkham Asylum, one of the Riddler's riddles revolves around him. His mask can be found in Quincy Sharp's office.

He has an entry in the Character Bios. His profile states:

Following the suspicious death of his multi-millionaire parents in a fire, Roman Sionis inherited their fortune and then went on to bankrupt their company. Saved by a buyout by Bruce Wayne, Sionis came to resent and hate Wayne. Fixated on the concept of masks, Sionis carved one from his father’s black coffin and sought revenge; his ensuing battle with the Dark Knight caused his mask to be burnt into his skin, remaking him as the Black Mask. Sionis is now a feared gang leader and one of the most powerful mob bosses in Gotham, with a burning hatred of the Batman.

Black Mask's only appearance in the main story is in the beginning, where he is seen holding several TYGER guards at bay with a chair, demanding to be led to Strange. He is then restrained by the TYGER guards with a taser. After falling to the ground, the guards continue beating him. He is also downloadable content, as a boss in the Robin challenges, where he is eventually fought onboard a train.

Though not appearing in the Batman: Arkham Knight main game, Black Mask is the main antagonist of the Red Hood sequel DLC episode, which is set some time after the events of the game.

To clean up Gotham, Jason Todd, now known as the vigilante Red Hood, plans to take down Black Mask as well as to destroy his criminal empire. Opposed to Batman, Red Hood is more violent and ruthless and also kills his enemies and therefore decimates Black Mask's thugs. After defeating many of the henchmen, Red Hood interrogates the last one and is told that Black Mask keeps the real stuff at the docks. Heading there, Red Hood continues killing Black Mask's men. When interrogating one of them, he is told that Black Mask is at his office in Downtown, but that he expects Red Hood. After shooting the thug, Red Hood heads downtown to settle things with Sionis. There, he defeats the present henchmen, which causes Black Mask to enter the room with more henchmen. During the fight with Red Hood, Black Mask uses a gun as well as his fists, but is eventually defeated.

Outmatched, Black Mask pleads for his life, saying he will leave Gotham for good. However Red Hood decides that Black Mask had his chance and instead pushes him through a window, causing him to fall to his death apparently. 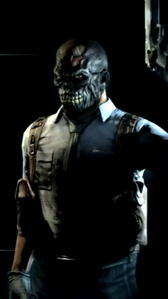 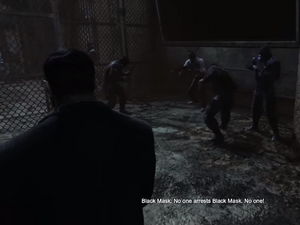 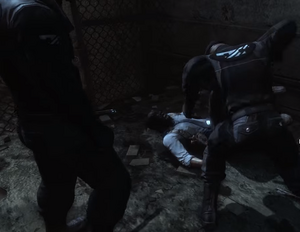 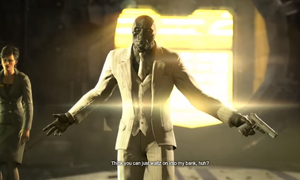 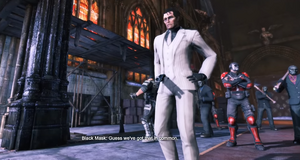 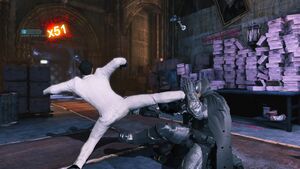 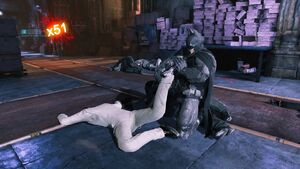 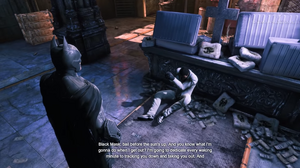 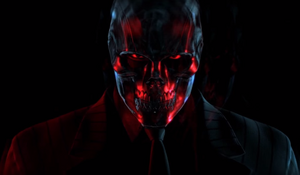 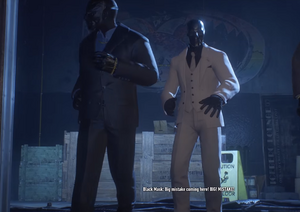 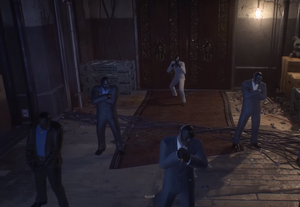 Black Mask and his henchmen preparing to fight the Red Hood. 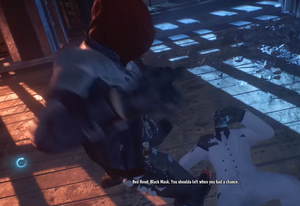 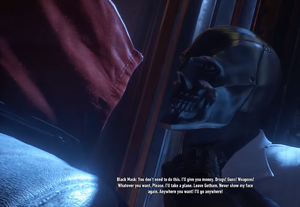 Black Mask before Red Hood throws him out the window. 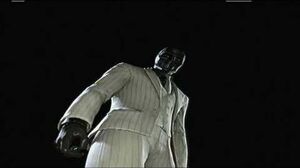 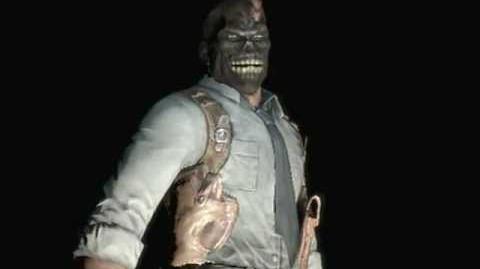 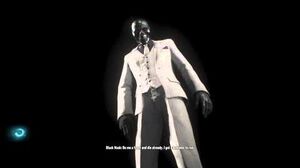