Supervising his club
Torturing his enemies and anyone who disrespect him

Get Cassandra Cain killed at all costs.

Get rid of Harley Quinn, Dinah Lance, Helena Bertinelli, and Renee Montoya.
Become the new crime lord of gotham by using the Bertinelli fortune (all failed).

Roman Sionis (better known under the alias Black Mask) is the main antagonist of the 2020 DC Extended Universe film Birds of Prey (And The Fantabulous Emancipation Of One Harley Quinn).

He is a powerful Gotham City crime lord who serves as the owner of his night club, Black Mask Club, as well as being the boss of Victor Zsasz.

He is also The Joker's rival in the underworld of Gotham. When Black Mask places a hit on Cassandra Cain, all Gothamites who work for him start looking for her, leading Harley Quinn and her henchwomen, the Birds of Prey to come to Cassandra's help (because Cassandra herself is one of Harley's minions) and do everything possible to bring down Sionis and his organization.

He was portrayed by Ewan McGregor, who also portrayed Patrick McKenna in Angels and Demons, Mark Renton in Trainspotting, and John Bishop in Jane Got a Gun.

Roman Sionis was first seen in the movie at his club where he tries to convince a Chinese mob boss to join his criminal empire only to be shut down then he draw the attention to Harley Quinn who just broke his personal driver and bodyguard legs he ask her if she is having a good time and if her boyfriend will be joining them tonight, she says that Joker has some business to take care and she will leaving soon. Before leaving he says to her that he send his regards the only reason that Black Mask is nice to Harley its because he fears the Joker and as long Harley is the girlfriend of Joker nobody would dare to harm her unknown to him and everybody in Gotham The Joker and Harley broke up.

Next day he watch Dinah Lance (Black Canary)  the singer of his club defending a unconsius Harley from two rapist he saw all from his wealty apartment wich was upstairs of his club he was so impressive of Dinah fighting skills that he decide to promote her to be his new personal bodyguard and driver so he send his right hand men Victor Zsasz to pick her up and tell her the news.

That same day he goes to a warehouse where he have captive the chinese mob boss and his wife and daughter angry because they reject the offer of black mask  of join him  he decide to send a message  to all criminals in Gotham who dont work for him of what could happen if they refuse join him so he order zsazs to brutally murder the mob boss kill slow and painful the wife and kill without pain the daughter after this he goes to outside the warehouse and order Dinah to driven him to his club.

He was killed when Cass plants a grenade. 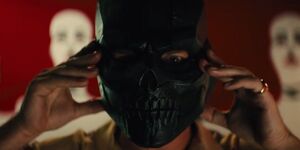 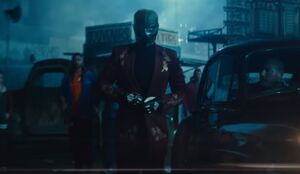 Retrieved from "https://villains.fandom.com/wiki/Black_Mask_(DC_Extended_Universe)?oldid=3555951"
Community content is available under CC-BY-SA unless otherwise noted.