Scheming.
Trying to avoid dangerous situations where he might be exposed.

Kill the Batman and become the world's most powerful crime boss.

Kill Superman.
Steal a building with Shadow Thief (all failed).

Black Mask is a villain in the TV Series The Batman. He is a powerful and cruel crime boss with a vast organization of henchmen.

In this version, his mask is irremovable and he has no fingerprints or distinguishing features, making it impossible to identify him. While never stated, many fans presume he is Roman Sionis.

He was voiced by James Remar, who also voiced another Batman villain, Silver Monkey, in Beware the Batman, and portrayed Beauty Smith in White Fang and Albert Ganz in 48 Hrs.

In "The Breakout", Black Mask steals a powerful shock-wave generator and holds Gotham City hostage. Demanding a ransom in exchange of not "remaking" Gotham City, Black Mask notifies Commissioner Gordon that he destroyed a building with the generator the night before, leading Gordon to request more time, which Black Mask refuses.

As Black Mask prepares the coordinates to destroy Gotham City, Batman appears and fights him and his henchmen. After a struggle, Black Mask is apprehended by Batgirl and Robin while Batman deactivates the device. Batman then orders Robin and Batgirl to accompany the police to escort Black Mask back to prison while he seeks the generator to destroy it.

At the police station, Gordon's officers are unable to identify Black Mask because they can't remove his mask. Gordon threatens to lock him up, but Black Mask distracts them long enough to allow his henchmen to subdue the entire police force with knockout gas, allowing him to free himself and leave. However, on his way to the exit, Black Mask is confronted by Robin and Batgirl, who had dispelled the gas, engaging them in a fight which the duo wins by knocking him out with a fire extinguisher and locking him up in a cell.

Black Mask's henchmen, led by his second-in-command Number 1, try to break into the police headquarters to rescue him, but are fended off by Robin and Batgirl. Black Mask informs the duo that Batman has been kidnapped by his henchmen and that they only get credit for defeating criminals like the Joker or the Penguin thanks to Batman, but Batgirl and Robin ignore him and keep fending off his henchmen until they finally break into the station through the roof and lock them up into a cell, freeing Black Mask and accompanying him to the roof, where an helicopter comes to pick him up. Black Mask thanks Number 1 for rescuing him but kills him to "fire" him for allowing Batgirl and Robin to retain him, naming another of his goons as his new "Number 1" just as Batgirl and Robin, who had escaped, reach him and capture him at his helicopter. Flying above Gotham, Black Mask activates the coordinates and taunts Robin and Batgirl for failing, but unknown to any of them, Batman had escaped and deactivated the generator. In the end, Black Mask is taken back to the police and arrested.

In "Rumors", Black Mask is one of the many villains captured by the new vigilante Rumor. Once freed, he tries to kill Rumor but Batman and Robin beat him with the other villains, being the first villain Batman knocks by a kick. Black Mask is then frozen along with many other villains when Batman tricks Mr. Freeze into freezing them while trying to freeze him. Later, Black Mask and all of the villains along with Rumor, minus Catwoman and Hugo Strnage, get arrested.

In "The Batman/Superman Story (Part One)", Lex Luthor hires Black Mask, Clayface, Bane and Mr. Freeze to kill Superman while he gets Poison Ivy captured in case Superman defeats them. To do so, Black Mask has Clayface kidnap Lois Lane at the Daily Planet and take her to his car, where he takes her to Gotham City. Superman tracks them down to a building where Black Mask has Lois tied up to a chair, leading him to shoot at Superman with a LexCorp gun enhanced with red kryptonite which temporarily diminishes his powers, allowing Bane and Mr. Feeze to beat up and freeze Superman, expecting Superman to suffocate while frozen. Though Superman succeeds in breaking from the ice, he is severely weakened, to which Black Mask decides to shoot him again, but Batman and Robin show up and knock the gun from his hands, causing Mr. Freeze to be depowered instead. As Robin blasts Clayface with his jetpack and Batman, along with the restored Superman, beats up Bane, Black Mask tries to flee, but the captive Lois trips him. Taking him into custody once more, Batman asks Black Mask why he suddenly decided to go after Superman, to which Lois reveals that Black Mask called Luthor and Superman deduces that Black Mask's association with his archenemy is why he got the depowering gun in the first place.

Back at his hideout, Black Mask has the meteor reduced to powder, explaining his plan to steal Gotham Gem Depository through spraying it with the Nth powder to make it float, executing his Number 1 for failing to understand his plan by shooting him with the powder and then opening up a window in the process, naming a female goon of his as his new Number 1 despite Shadow Thief's complaints that the title should be his, as Black Mask blames him for attracting Hawkman's attention. The night of the heist, while Shadow Thief sprays some train rails and a train full of passengers to distract Hawkman, Batman and Robin, Black Mask and his henchmen spray the Gotham Gem Depository, making it float while taking it with them.

Once inside the depository, Black Mask has its two guards tied up and loots the vault, but the Dynamic Duo arrive to the scene while Hawkman takes the guards to safety, restraining Black Mask and his goons while fighting Shadow Thief. After Shadow Thief sprays Robin and throws him off the building to float to his death only to be retrieved by Hawkman, Black Mask tries to shoot Batman dead, but his helicopter crashes against the despository, knocking him away and allowing Batman to destroy the Shadow Thief's shapeshifting equipment. The effects of the powder start to wear off, causing the depository to start impacting against some buildings' roofs as Black Mask repeteadly tries to kill the Dynamic Duo, but is ultimately knocked out while Hawkman pulls the Gotham Gem Depository into the sea to not cause more destruction. In the end, as the Gotham Gem Depository becomes a new aquatic attraction for the Gothamites, Shadow Thief is taken back to Midway City by Hawkman while Black Mask is taken back to prison. 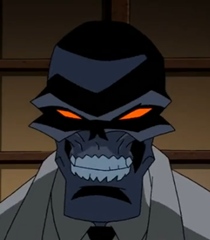