Destroy all life in the universe. (succeeded for a time, failed later)

The Black Moon is an enigmatic entity in the universe of the SCP Foundation. It is a powerful and ancient god-like entity existing outside of reality and wishes to cause as much destruction as possible.

It is associated with the memetic phrase "Does the black moon howl?" which appears in numerous articles in the SCP site, and is one of the many SCPs proposed for "SCP-001". It is the archenemy of SCP-001-CAGE (The Administrator).

(Note: Due to the universe of the SCP Foundation having no official canon, there is also no official origin or biography to the Black Moon. The biography below is composed of several different sources of the SCP-wiki, which can work together, but necessarily do not.)

It is unknown how the entity that would come to be known as the Black Moon came into existence. It existed outside of reality and began using its power to petrify and obliterate random sentient beings within the universe every long period of time. However, in the early history of Earth a man obtained the Counterbalance to the Black Moon, granting him immortality and immunity to the Black Moon's power. The man tried to fight the Black Moon for thousands of years to no avail and eventually growing too old. Back when humanity was so ancient that they didn't even use names yet, the old man settled on a small village and one day encountered a young boy who witnessed the youngest hunter of the village being killed by the Black Moon. After informing the boy of the Black Moon the old man decided to make the boy his successor in order to keep fighting against the Black Moon and gave him the Counterbalance before he crumbled to dust.

When the Sumerian king Etana begged the gods to be given a way to conceive a son in order to keep his kingdom from erupting into chaos the gods refused. However, the king was determined to keep his kingdom together and so he went to the Black Moon in order to be granted the "Seed of Life". The Black Moon made an agreement with Etana that it would give him the seed in exchange for the anomalous powers which humanity possessed at the time to be taken away from them until the agreement would eventually dissolve when the Black Moon howled. Etana accepted the deal, getting the Seed of Life, while the Black Moon robbed humanity of their powers. The agreement would later be designated as SCP-4002, while the Seed was used for SCP-2000.

The Black Moon once took some knowledge from the Wanderer's Library at some unknown point in the past, causing it to become one the Library's many enemies.

As the boy grew into a man and began trying to find a way to defeat the Black Moon as the entity began slightly speeding up its effects on life, until in the modern age the man together with other brilliant individuals founded the SCP Foundation in order to contain other anomalies, with himself becoming the Administrator. They designated the Black Moon as SCP-001, while the Administrator was given the designation SCP-001-CAGE, and began attempting to find a way to stop the entity for good. Knowing that the Black Moon was possibly unable to act while being observed, Dr. Moto created project SCP-001-KEY which involved the creation of anomalous objects with similar behavior that would be linked to the Black Moon in hopes of using this to keep it from killing anymore people. From this project several new SCPs were created which included SCP-173 and SCP-650, but despite deeming them a success the Black Moon was unaffected by this as its activity continued as usual, filling Dr. Moto with desperation which lead to him committing suicide by letting SCP-173 snap his neck.

After a version of Allison Chao failed to be reunited with her father Dr. Gears as he was killed by SCP-682, the Black Moon sensed her despair and hatred and teleported her alongside the corpse of Gears to its domain which was devoid of anything. At first Allison was antagonistic towards the entity, but the Black Moon told her that despite her father being dead there were other counterparts in the multiverse still alive who were also separated from their daughters. The entity then offered her a way to travel through the multiverse and help these alternate version of Dr. Gears while she became its pawn in its battle against its enemy.

Around the 31st century, the Foundation eventually developed SCP-001-SEEK, a black biomechanical spaceship designed for space exploration. The Foundation hoped to use it to travel to extraterrestrial civilizations which might possess additional knowledge on the Black Moon which could be useful in their fight against it. In the ensuing centuries SCP-001-SEEK was able to travel to multiple planets that previously possessed conscious lifeforms, but were unable to find much information regarding the Black Moon apart that its effects were also present in those planets. In its 499th travel the vessel was finally able to find a surviving fungi-like alien who had been in cryogenic sleep in hopes of escaping the Black Moon's effects, and was quickly brought back to Earth where it was designated as SCP-001-SAGE. However, despite giving the Foundation some relevant information regarding the Black Moon it wasn't anything new or useful and in May 1st of 5011 SCP-001-SAGE succumbed to the Black Moon's effects, while the Administrator locked himself inside the Singular Conceptual Bunker.

When the Black Queen first met the Black Moon she described it as a faceless mass or cloud of dancing shadows which sat on magnificent royal throne. After entering the Singular Conceptual Bunker the Black Moon was described as a shadow with delusions of form like smoke trapped in a fist, while its voice sounded like thousands of tiny whispers building to a divine crescendo.

Not much is known about the personality of the Black Moon. When confronting the Black Queen it appeared as an enigmatic individual who although it behaved as supporting about the loss of her father it was in fact part of its manipulation to use her in its fight against life. It also appeared to be fond of the void and the meaningless as when Allison stated that its title as the Black Moon didn't mean anything to her this greatly pleased it. When confronting the Administrator the Black Moon was quickly filled with rage and attempted to murder him at all costs, while stating that everything was meaningless.

The Black Moon was a powerful entropic entity existing outside of reality. It was capable of petrifying an intelligent lifeform and disintegrate in a matter of seconds, no matter if that being was cryogenically frozen or not. It originally did this once every decade, but as countless years went on it sped up this process, eventually killing multiple beings within minutes. Allegedly, if someone were to look at the Black Moon it would be unable to use its powers any further, but it was never proved due to it existing outside of reality. The Foundation tried to create anomalies which behaved similarly to the Black Moon in the hopes of using them as vessels for the entity which would have led to them stopping it from continuing its destruction, but it failed as the Black Moon was not connected with the anomalies.

The Black Moon also appeared to possess some telepathy as it could only talk to people through their mind, since due to its form it was unable to speak, and it also gave a version of the Black Queen the ability to utilize the Ways to properly travel through the multiverse. The Black Moon possessed a counterbalance in form of a power granted to a human individual. Despite giving this individual immortality this didn't actually made him immune to the Black Moon's effects but it just meant that they would be the last to die to the entity. After the Black Moon entered the Singular Conceptual Bunker it transformed into a humanoid form with its supernatural powers taken away as it existed as just information while inside the bunker. This allowed the Administrator to be on a same level as the Black Moon and thanks to this was able to beat the entity to death. 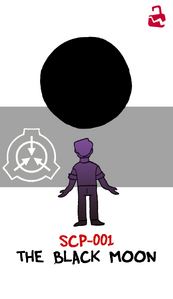 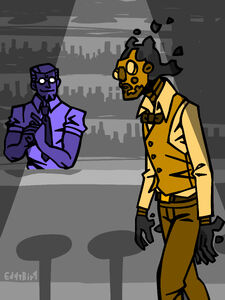 The Black Moon in its humanoid form moments before being beaten by the Administrator. 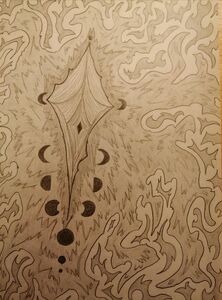 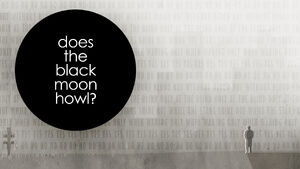 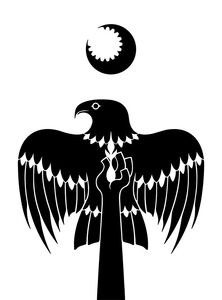 The Black Moon granting Etana the Seed from SCP-4002. 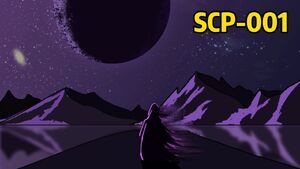 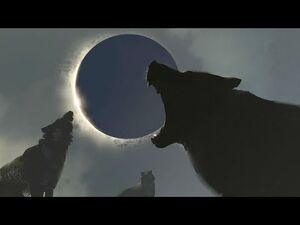 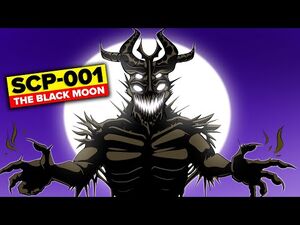