Villains Wiki
Register
Don't have an account?
Sign In
Advertisement
in: Marvel Villains, Avengers Villains, Guardians of the Galaxy Villains,
and 65 more
English

NOTE: This article is about the incarnation of the Black Order from the Marvel Cinematic film series. The mainstream version can be found here: Black Order.

The Children of Thanos

Help Thanos defeat the Avengers and their allies to destroy and rebuild the universe in his image (2014 versions; failed).

The Black Order are the main antagonistic faction of the Infinity Saga of the Marvel Cinematic Universe, appearing as the main antagonistic faction of both Avengers: Infinity War and its 2019 sequel Avengers: Endgame. Variants of them also appear as the secondary antagonists of "What If… T'Challa Became a Star-Lord?", the second episode of the Marvel animated anthology series What If...?.

They are a group of Thanos' most powerful lieutenants in his army who assist him in his quest to collect the Infinity Stones and remake the universe in his own image.

The Black Order didn't appear in the film, but they were mentioned by Nebula, who happens to be a member alongside Gamora. Both Gamora and Nebula would later sever their ties to Thanos and the Black Order during the course of the film; Gamora sided up with the Guardians of the Galaxy while Nebula sides up with Ronan of his plot to destroy the planet Xandar. Eventually, Nebula escaped from Ronan's side after Gamora helps the Guardians defeat Ronan for good.

The Black Order was mentioned again when Nebula voiced her anger towards Gamora due to the trauma she suffered at Thanos when they were training alongside the other members of the Black Order, saying that she only wanted Gamora to act like a sister instead of focusing on her intents to win their sparring battles against each other. Eventually, they reconcile after they help the Guardians defeat Ego and the Sovereign.

The Black Order finally made their appearance in the film, where they are first seen helping their father acquire the Power Stone (the Orb) by invading and destroying the planet Xandar. They later pilot their giant ship as they spotted another ship (containing Thor, Loki, Hulk and the Asgaradian survivors) following the destruction of Asgard and the deaths of Surtur, Hela, Skurge, and the Berserker Army.

Being aware that Loki has gotten hold of the Space Stone (the Tesseract), Thanos gets the Black Order to board the Asgardians' ship and attack the occupants. During the siege, Hulk was sent back to Earth to warn of Thanos' arrival by Hemidall, who ends up being killed by Thanos. The Black Order then helps their father coercing Loki in surrendering the Tesseract, just as Thanos proceeds to kill Loki and use the Orb to destroy the Asgardians' ship, killing all of the Asgardians in the process. Thanos and his children then depart away from the scene in their ship, leaving a helpless Thor to drift in space before he was rescued by the Guardians of the Galaxy.

With the Orb and Tesseract in his possession, Thanos gets the Black Order to split up and search for the other Stones on Earth. As Thanos heads alone to force the Collector into giving him the Reality Stone (the Aether), Maw and Obsidian tracked down the Hulk to New York City, where he stole the Time Stone (Eye of Agamotto) by taking its occupant Doctor Strange as their captive, intending to deliver him to Thanos at the planet Titan. In the meantime, Midnight and Glaive head over to Scotland, where they ambushed Scarlet Witch and Vision (as the latter holds the Mind Stone on his forehead). However, Captain America, Black Widow and Falcon arrived to the rescue by bringing Scarlet Witch and Vision to Avenger HQ, where they plan to go to Wakanda to destroy the Mind Stone.

After killing the Collector to get hold of the Aether, Thanos kidnaps Gamora and coerces her into giving the location of the Soul Stone by threatening to torture Nebula. Gamora then gives the location: a planet called Vomrir, where the Red Skull serves as the stone's guardian. Thanos would later reluctantly kill Gamora in order to take possession of the Soul Stone per Red Skull's suggestion.

In the meantime, Iron Man and Spiderman manage to head over to Titan, where they killed Maw to save Strange and the Eye of Agamotto, just as Nebula contacts Thor and the other Guardians to meet up with her. However, Thanos arrived to the scene as well and after expressing his appreciation of Maw having given his life to succesfully bring Strange to Titan and some sadness over his son's death, overwhelmed the group before coercing Strange into giving up the Eye of Agamotto, ultimately making Maw's death worth it.

With five Infinity Stones in his possession, Thanos directed Glaive, Midnight and Obsidian to assemble a massive army of Outriders to attack Wakanda in order to obtain the Mind Stone from Vision. This forces several of the Avengers and the Wakandan warriors to lay down a defense against the Black Order and the Outriders. Despite being outnumbered by the massive armies, the Avengers and Wakandan warriors were able to turn the tide to destroy the Outriders and kill Glaive, Midnight and Obsidian for good, thanks to the help of an arriving Thor, Rocket Raccoon and Groot with a new weapon called Stormbreaker.

Unfortunately, despite the loss of the Black Order and the Outriders, Thanos arrived and was able to collect the Mind Stone while killing Vision, which was in part due to the Black Order, as them forcing Vision into the open and leaving him too injured to fight back allowed Thanos to easily kill the android. Despite being badly injured on the chest by Thor with Stormbreaker, Thanos still used the power of all six Infinity Stones to wipe out half of the universe's populace (including several Avengers and Guardians), although he lamented the loss of his children, especially Gamora, but he did admit that the loss of his children and followers meant he had lost everything.

This left the surviving heroes to mope in defeat while a triumphant Thanos oversees a sunrise from another planet, satisfied that he finally achieved his goal. Even when the surviving Avengers managed to track down and kill Thanos three weeks later, he already destroyed the Stones prior to their arrival so that his actions can never be reversed, making the Avengers' victory hollow and in vain and in a sense allowing the Black Order victory for years to come even though the Order had all been destroyed in process with Thanos also killed by Thor.

Five years following Thanos' death, the surviving Avengers, along with the surviving populace forced to live with the damage that Thanos caused. However, the Avengers soon learned that Ant-Man was stuck in the Quantum Realm before the death wave happened and that it took five hours to get out, realizing that they can use the Quantum Realm to go back in time to nab the Stones and use them to reverse the death wave for good.

While traveling to the year 2014 to collect the Power Stone, present Nebula was captured by the Black Order after her memories accidentally synced with the memories of the Nebula of that time. Discovering that the Avengers were attempting to collect the Infinity Stones to undo what he had accomplished in the future, Thanos had the 2014 Nebula to take the present Nebula's place and travel to the present with the stone. After arriving five years after Thanos had used the stones, the 2014 Nebula opened up a portal for the rest of the Black Order to come through.

Upon arriving in the present, the Black Order bombarded the Avengers' base before traveling down to collect the Infinity Stones. However, they were unable to do so before Hulk used the gauntlet to revive all those Thanos had killed. In addition, the 2014 Gamora defected and helped free Nebula and kill her 2014 past self before going to recover the stones before Thanos could get them. As the Black Order prepared to invade Earth, an army comprised of the revived Avengers, the Asgardians, sorcerers and the Wakandans then showed up through portals created by Dr. Strange to fight the Black Order.

The Black Order were ultimately wiped out when Iron Man took the Infinity Stones and used them to disintegrate Thanos and all of his followers. 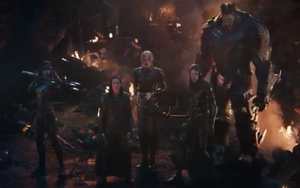 Loki surrounded by the Black Order.

Thanos teleporting himself and the Black Order away from the Asgardian cruiser.