The boss of the organization is unseen and unknown, he only contacts his members through text messages. The boss phone number follows the tune of the children song Nanatsu no Ko (七つの子; Literally meaning "Seven Children") which is known to be as; #969#6261.

As revealed in December 14, 2017, the true identity of the boss is Renya Karasuma.

The Black Organization seems to have hideouts, but none of them have been completely revealed so far. In line with their secretive existence, the Black Organization prefers to meet in places that are isolated or where they can slip away easily. Several operatives occupy public positions like famous actress (Vermouth), television announcer (Kir), or company chairman (Pisco) which gives the Black Organization connections to circles of the rich and famous and access to otherwise unavailable locations. So far, the Black Organization have met clients at a dim restaurant, a Shinkansen's dining car, a crowded wake, a train station under construction, and in an isolated area of an amusement park. The Black Organization often conducts business and meetings at the shipping yard. Not very many member's abodes have been shown, but they range in extravagance from Kir's relatively plain apartment to Vermouth's lavish penthouse in a tall building.

There are many divisions in the Black Organization which are roughly grouped into seven different divisions. They are:

What does it Want?

As of now, the Organization's main purpose and goal still remain mystery. Currently, the CIA's undercover member Kir, the PSB (Public Security Bureau) undercover member Bourbon as well as the Boss's ringtone, appear to be the only source of information Conan and the FBI can rely on to learn the true intentions behind the Organization. There is a hint of possibility (through secret documents that Conan managed to obtain) that they are planning to "raise the dead" - an implication that they may intend to control biological life. The fact that Sharon Vineyard apparently remains ageless, and the original purpose of the APTX 4869 (as hinted by Ai Haibara herself), provide strong hints in that direction. It could be that they are seeking immortality. 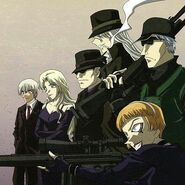 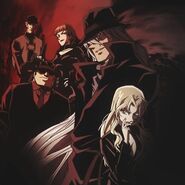 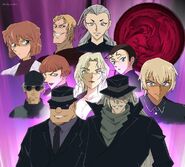