Create witches under his influence.

Black Phillip is the main antagonist of the 2015 independent horror film The Witch, only revealing himself near the end. The other antagonist is The Witch, one of his servants. Taking on the guise of a rambunctious billy goat, Black Phillip is actually the assumed mortal form of Satan himself, who torments a Puritan Christian family.

He was portrayed by a goat named Charlie and voiced by Wahab Chaudhry, who also portrayed his human form.

In March 1630, a Puritan plantation in New England banishes William for heresy, prompting him to move near a forest, along with his wife Katherine and children Thomasin, Caleb, Mercy and Jonas. By November, the family is situated with a struggling farm, a new son Samuel, as well as livestock, including Black Phillip.

An old, decrepit witch in the forest abducts and murders Samuel to create flying ointment. Mercy and Jonas take a liking to Black Phillip and spend their time playing and chasing him, as well as talking with him. He tells the twins that a witch abducted Samuel. When the twins antagonize Thomasin with this, she sardonically threatens them, saying that she was the witch.

Thomasin and Caleb venture into the forest in the middle of the night, where they are separated, resulting in Caleb getting lured in by a witch and becoming possessed. Caleb returns a day later and dies after proclaiming his love for Jesus, all the while with Mercy and Jonas apparently convulsing. When William confronts Thomasin about the accusations of her being a witch, she reveals that Mercy and Jonas have been talking with Black Phillip, resulting in William locking the children in with the goats, including Black Phillip. The twins reconfirm that Black Phillip is the guise of Satan and that they have been whispering to him.

That night, the witch suckles blood from a goat and abducts the twins. In the morning, William discovers the twins' clothing and the rest of the goats slaughtered. Black Phillip attacks and kills him, before walking away. Katherine attacks Thomasin, prompting her daughter to kill her with a knife. Observing this, Black Phillip calmly walks into the house.

That evening, Thomasin enters the house and sits in front of Black Phillip. She asks him to speak, and he requests to know what she wants. He offers her a life of pleasure and comfort, if only she serves him. After Thomasin disrobes, he transforms into his human form and has her sign his book, binding her soul to him forever. As a goat, he leads her into the forest, where there is a coven of witches singing and dancing around a fire. He watches as Thomasin joins in and the witches levitate into the air. 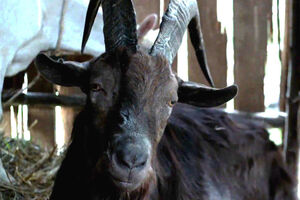 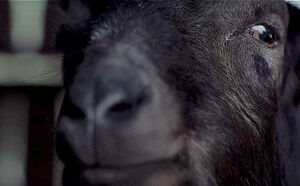 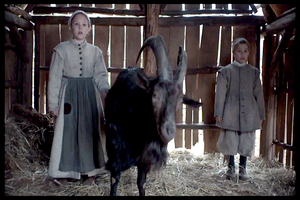 Black Phillip with Jonas and Mercy. 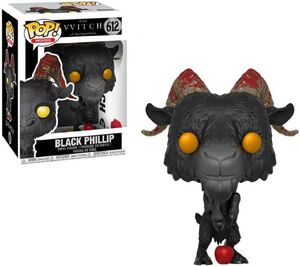 A Funko Pop of Black Phillip.
Add a photo to this gallery

Retrieved from "https://villains.fandom.com/wiki/Black_Phillip?oldid=3767083"
Community content is available under CC-BY-SA unless otherwise noted.