Villains Wiki
Register
Don't have an account?
Sign In
Advertisement
in: Female, Evil from the Past, Chaotic Evil,
and 16 more

Teleporting around the town of Black Spring.

Find a human to untie her stitches in her mouth and eyes (succeeded).

Find a child to replace her murdered son (succeeded, briefly).
Curse the town of Black Spring in vengeance for her suffering (succeeded).

Katherine van der Wyler, better known by her aliases, the Black Rock Witch and the Witch of Black Spring, is a 17th century witch who stalks the streets of Black Spring, in the Hudson Highlands of the United States of America. She is a major antagonist in Thomas Olde Huevelt's 2013 novel HEX.

She came over on the Dutch ships and is from Holland. During 1664, she was an old mother in the town of Black Spring, because she literally had a young child of her own. However, the young lad died of an illness. Grief-stricken, she called on dark magic to resurrect the boy. Successful, the townsfolk were scared witless to see the boy walking the streets of the town, then called New Beek, several days after his funeral.

Furious, the town elders came and cursed Katherine as a witch, and made her kill her son as a punishment, for in their eyes he was an unholy monster. Then, they lynched her as an evil crone and threw her mutilated body in the woods. Thus they believed themselves safe from her evil. However, they had only succeeded in damning themselves and creating an unspeakable monstrous force.

According to Peter van der Meer, a councilman in Black Spring, the witch is a possessed woman (and not actually Katherine) who the town elders sewed shut her eyes and mouth to prevent Katherine's spirit controlling the lady. Thus, the possessed lady is obviously some kind of zombie. She cannot age, she cannot die, and she will never stop.

To combat her haunting, HEX has been created, an organisation led by the tyrannical Colton Mathers, who runs the town as if it were stuck in the seventeenth century. Because of this, they have practically rendered the Internet obselete in town, strictly monitoring its usage amongst the citizens, and outright blocking YouTube from the children, for fear that one of them will film the Witch or worse, upload her face onto YouTube, or even worse, untie her stitches for her. The very elite members of HEX are the only ones allowed to use high tech surveillance to control Katherine's movements, and they are desperate to hide her from the outside world, thus they strictly monitor Internet usage amongst youngsters in the town, for fear one of them will find Katherine, record her presence and upload it to YouTube, thus encouraging tourism in the town. That is Mather's worst fear. To combat this, he has brutal punishments in place, such as flogging, for those miscreants who dare reproach those rules.

Any new residents of the town who witness Katherine's ghost will be traumatised, then told her history and the town's past of hauntings, and then threatened they cannot leave, even if they want, because Katherine's ghost makes people suicidal upon exiting the town.

Katherine first appears in the Grant house, when the sons Matthew and Tyler are arguing with their parents, Steve and Jocelyn, about which child the parents would prefer to save given the choice. This morbid question arouses from Katherine's choice the town elders gave her, kill one child to let the other live. In the midst of the argument, Katherine stumbles up from her chair and slowly staggers into the camera, yet Tyler soon afterwards deletes his footage, from fear of HEX and Mathers.

Next, Katherine appears in the Delarossa's house, new neighbours in Black Spring, and they are in the process of making out in bed, but Katherine's hideous ghost appears and scares them witless, forcing the shaking couple to be expositioned by Peter on the history of the town, then threatened they can never leave.

Three teenagers, Justin Sawyer, Jadyon Hurst and Burak, have been tormenting the witch for weeks, and Jaydon's mother, the butcher, Griselda, is a devout fanatic of Katherine, bringing the witch offerings in the woods after dark, for fear this will encourage Katherine to spare the Holsts. However, Tyler, Jaydon's friend, is scared Jaydon is getting too antisocial and violent, and Tyler is actually getting to the point where he is worried about Jaydon's friendship with him and what Jaydon truly thinks of him; and thus he backs off.

One day, the boys trip up the witch in the parking lot, and they film the act on Tyler's phone. The witch, being blind, walks into the barrier they installed, and literally falls flat on her bottom. The lads show this to Robert Grim, a councilman and one of the only good men in town, yet he is so generous he treats it as a joke, rather than flog them.

Finally, Jaydon and his friends corner Katherine in Jaydon's house, and Jaydon begins mercilessly tormenting the witch, cutting her breast open and mutilating her - forcing her to kill the Grant dog in response. Then, Jaydon goes too far - he stones the witch, along with his friends. A furious Mathers arrests all three of them, calling a town meeting in which the miscreants are sentenced to a public flogging, because any one of them could have opened Katherine's eyes, and damned if that happens!

The boys are duly flogged, and sent to the detention center, Doodletown, to recover, yet when released, Jaydon breaks into Tyler's room, and shows him Katherine whispering on Tyler's phone, thus forcing Tyler to kill himself, after stuffing poisonous mushrooms in Matthew's mouth.

After Tyler's funeral, Jocelyn goes insane and stays with Matthew at hospital. Steve is brainwashed by Katherine into opening her stitches. A massive blackout hits town and Steve awakens in the woods, having visions of Griselda being possessed by Katherine, feeding the children and protecting them, only to have the adults intervene, and in doing so the adults accidentally cause the death of all the town's children. Steve almost goes mad from these horrendous visions, and in a desperate, insane urge to see his Tyler returned from the dead, Steve rushed into town only to be recognised by furious mobsters, who accost him, accusing him of unleashing the new curse and damming them all. The town is enraged, killing Jaydon, in a fit born to find the perpetrator.

Finished with possessing Griselda, Katherine, in a desperate search for closure, abducts the Hoffman children, and cares for them as her own, seemingly finally at peace. She surprises the townsfolk at not being crazy any more, just a protective mother. But then, Marty the technician comes along, trying to kill Katherine in vengeance but accidentally kills the Hoffman children, so Katherine coughs at him, infecting him with 17th century smallpox.

Then the townspeople who are considered suspects are thrown into the church to burn alive in a pyre.

Katherine's ghost is calmly waiting at the church. She sends Steve into the place before it is set alight. Steve meets his burning wife and son in the funeral pyre, yet selfishly and in an act of pure undaulterated evil, abandons his wife and son when they need him most, and flees out the church basement.

A heartbroken Katherine, maddened with grief at losing her children, finds no solace in the town any more, and, crying, sends the entire town in a hypnotic state, to drown to death in the Hudson river. Those who did not die in the church fire are sent, stumbling through the woods like zombies, to drown in the river's depths, "giving the early risers a glimpse of someone else's nightmare."

It is unknown what happens to Katherine or whether, having completed her curse, she finally found peace away from the brutality of humanity. It is suspected she may still haunt the woods, as Thomas Olde Huevelt warns his readers that they never know who may be watching in the Black Rock Forest. But it is also suspected she finally did move on, and Steve himself took her place - in the finale of the novel, he, maddened with grief and anger, sews his own eyes shut to prevent seeing the corpse of his dead son walking the town.

Originally a good-natured and protective mother, Katherine had a very similar personality to Darth Vader, because all she really wanted was a family. In her case, the Bigger Bad, and the equivalent of Emperor Palpatine, were the town elders, because not only did they force her to kill her baby, they turned her into a vengeful monster herself.

The character of Katherine is also like that of Mathias, an evil sorcerer driven mad by the cruelty of humanity, originally with a loving family yet gifted into darkness by the greed of society. 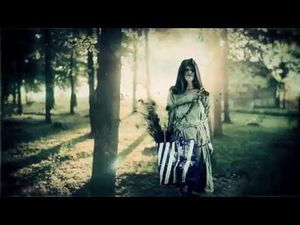 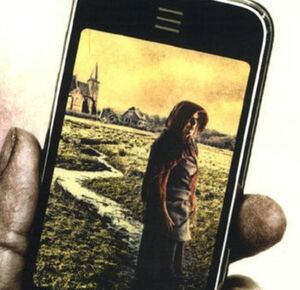 The Black Rock Witch appearing on a cellphone. 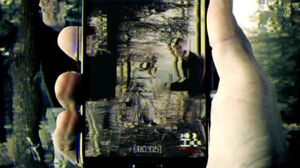 Beware of the Black Rock Witch, for death follows her wherever she goes.