The Cabal
The Order
The Shadow Council

Control over an entire empire
Manipulation over generals and governors

The Black Rose is the name referred to a shadowy powerful cult-like cabal inside the lore of the multiplayer online battle arena game League of Legends.

An ancient organization, the Black Rose pulls the strings and keeps control of the empire of Noxus since immemorial times, even before it existed. For centuries, they have controlled who retains power over Noxus, keeping a grip over its emperors, governors and generals. They have influence over hundreds of aristocrats, noble houses and even powerful beings and sorcerers who work at the biding of their matron, the pale woman LeBlanc.

However, after the Grand General Jericho Swain seized power over Noxus, the organization lost most influence over the empire, and has made its mission to kill him and regain what was once the powerful council of the Noxii tribe, and expand the influence of the Rose all over the world.

Thousands of years before the Noxian Empire existed, when they were just a group of barbarian tribes called the Noxii, the Iron Revenant Mordekaiser built his reign forged with blood and death over the tribes. Hoping to defeat the dark lord, LeBlanc, a powerful sorceress from within his inner circle, conspired with a powerful Hemomancer called Vladimir, formulating a plot to destroy the source that gave him power: The Immortal Bastion, his personal fortress. Along with their fellow conspirators, the two sorcerers forged an alliance known as the Black Rose, and would work together within this secret cabal to seize power by any means necessary.

With the help of the Noxii tribes, the Black Rose severed the anchors that kept Mordekaiser's spirit inside the armor, and locked it away in a secret place. After the reign of Mordekaiser finally came to an end, both Vladimir and LeBlanc showed to be soul mates; bloodthirsty, cunning and power-hungry, both sorcerers feasted as equals. Thanks to this traits, both of them initiated a pact that would let them control the future of the withered Noxii tribe, that arose again from within the rubbish of the Immortal Bastion. Even after the story took care of erasing these two from the books, it didn't stop many powerful nobles, masters of magic and dark beings to follow their biding, building their own dark council  behind the curtains of the new empire of Noxus. The ambitious Vladimir finally sought to leave the Black Rose to build a cult of his own, leaving LeBlanc as the sole commander of the cabal. And so, the story of the Black Rose began, but only those who are determined to follow the clandestine interest of the Pale Woman are worthy enough to coexist in.

The Black Rose once ran an academy for children born with magical powers, with the aim of creating a living weapon. LeBlanc found potential in a girl named Rell, so she requested the girl's parents to enrol her into the academy. Throughout her childhood, Rell had magical sigils grafted onto her, while her classmates gradually disappeared. On her sixteenth birthday, Rell decided she'd had enough and wanted to figure out what was going on. She found all of her "Nullified" classmates, with their magic drained out of them and being reduced to emotionless husks. It also turned out that Rell's mother had been working as an overseer for the academy. In a fit of rage, Rell destroyed the academy and went on a crusade to destroy the Black Rose, and Noxus as a whole as they let these atrocities continue for the longest time. While the Black Rose has been scrambling to pick up the pieces of their plan, Rell's crusades throughout Noxus continuously puts their reputation at risk. 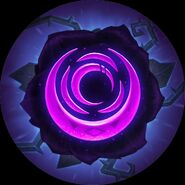 Lord Milat, a retired general involved with the Black Rose.

Aelana, Thorn of the Rose (another Black Rose agent).

Agent of the Black Rose.