Scooby-Doo! and the Samurai Sword

To rule the world (failed)

The Black Samurai is the main antagonist of the Scooby-Doo franchise's 20th feature film Scooby-Doo! and the Samurai Sword. He was originally an honorable warrior, but fell to the dark side in his attempt to gain a powerful weapon.

He was voiced by Kevin Michael Richardson, who also played Captain Gantu in Lilo & Stitch, Dark Laser in The Fairly OddParents, the Joker in The Batman, Temutai in Kung Fu Panda: Legends of Awesomeness, Goro in Mortal Kombat, Chairman Drek in Ratchet & Clank, Doug the Pimple in Family Guy, Prince John in House of Mouse, Trigon in Teen Titans Go!, Lester Krinklesac in The Cleveland Show, Skulker in Danny Phantom, Carlton Duquesne in Batman: Mystery of the Batwoman, Ian the Gator in The Princess and the Frog, Satan Claus in Kim Jong Un vs. Christmas, Tartarus in Halo 2, Floronic Man in Batman and Harley Quinn, Sarevok Anchev in Dungeons & Dragons: Baldur's Gate, and Shredder in the 2012 Teenage Mutant Ninja Turtles animated series. His human self was voiced by George Takei.

The Black Samurai was a dreaded samurai warlord intent on ruling the world who was resurrected and unleashed a dreadful curse.

Initially, the Black Samurai was an honorable and trustworthy warrior, who longed to become a great warrior, as such he tried to get a sword from Japan's greatest swordsmith, Masamune, but he was impatient at the time it would take to forge (1 year), he secretly accepted another deal from Muramasa (Masamune's apprentice) for a sword that was supposed to be of the same quality, but in half the time. Unfortunately, this sword was infused with dark magic, which had been used to speed up the forging, and corrupted him, turning him into a ruthless, dangerous, and destructive monster. The Black Samurai was eventually imprisoned by the Sword of Fate (wielded by the Green Dragon), trapping him in his own cursed sword, which became known as the the Sword of Doom.

Over 500 years later, in the modern day the evil martial arts school owner Miss Mirimoto tried to use him in her plan to conquer and destroy the modern world. She released him by tricking the gang into finding The Sword of Doom. Then initiating the ritual to break the spell and free the dark being. She then tried to order him, demanding that he offer his service to her, however, the Black Samurai telekinetically hoisted her into the air and mocked her for even assuming she could control the true lord of evil. He then casually tossed her into the stone steps, sending her into unconsciousness. Then, using his dark powers he forced everyone else to bow before for him. So he revealed his plan to use his sword to make all the citizens of Japan bow before him for eternity.

Luckily, Shaggy and Scooby-Doo had rediscovered the Sword of Fate and arrived to confront him. Together they both wielded the sword and fought the Samurai. They managed to defeat him by breaking his own cursed sword with the Sword of Fate. Because of that, his soul was cleansed of the dark magic and set free, becoming an old man he thanked the two of them for freeing him from his accursed blade before dying and vanishing into thin air. 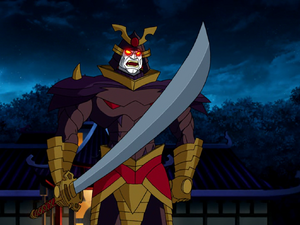