Thugish Minions
The Black Satan Henchmen are the secondary antagonists of 3 From Hell. They are members of the Black Satans gang, and are led by Aquarius, who is the son of the Unholy Two gang member Rondo.

After the death of Aquarius's father Rondo at the hands of Otis B. Driftwood, and when Carlos Perro recognizes Otis, Baby Firefly, and Foxy Coltrane who are at his place, he alerts Aquarius to their location. When the Black Satan henchmen and their boss Aquarius arrive, they start hunting for Otis, Baby, and Foxy and as well kill the three prostitutes, Juanita, Princesa, and Bella in the process. 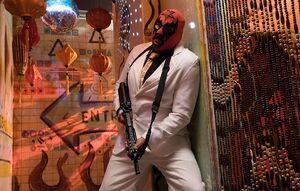