Steal Princess Peach's statue (succeeded, but failed to keep it)

The Black Sugar Gang (Jap.: ブラックシュガー団, Burakku Shugā Dan) is a group of pirates serving as the main enemies Wario faces during his adventures on Kitchen Island, they are led by Captain Syrup, the main antagonist of Wario Land: Super Mario Land 3 and Wario Land II with Syrup castle functioning as their headquarter stationed on Kitchen Island. They also have their own pirate ship known as the SS Tea Cup.

The pirates make their first debut in Wario Land: Super Mario Land 3 released on the Game Boy in 1994. The gang stole Princess Peach's/Princess Toadstool's giant gold statue and Wario tries to steal the statue, along with their other stolen loot, from the gang in order to sell it for a ransom from Princess Peach and to buy himself a palace that can rival Mario’s in terms of architecture and aesthetics.

Wario's very first encounter with the Black Sugar Gang is in the opening of the game. A pirate ship, possibly the SS Tea Cup, swims on the high seas, perhaps to scout out the surroundings. Suddenly one of the pirates sees Wario paddling towards the pirate ship at rapid speed. The pirates try to escape but this turns out to be pointless because Wario catches the ship with a surprise attack and sends the pirates up into the air. The pirate ship then falls headfirst into the sea. Lastly, Wario jumps onto the hull of the ship possibly to express his dominance over the pirates.

Arriving on the island, Wario must fight against the pirate gang, including its highest-ranking members, Spiked Pirate, Beefne, Hinyari (optionally), Funfun, Bobo, Zenisukī and finally, their leader Captain Syrup. Although, Wario does not directly fight Captain Syrup, she instead summons her Genie to take Wario out but he overpowers the Genie and defeats the Black Sugar Gang claiming the statue and their treasury.

Captain Syrup and the Black Sugar Gang return in Wario Land II released in 1998 on the same handheld as its predecessor. The game takes place after the events on Kitchen Island in Wario Land: Super Mario Land 3. One early morning three Pirate Gooms, the most common crew members in the Black Sugar Gang, break into Wario’s newly built castle and steal all of his treasure and flood his home as well by turning on the giant water tap located inside Castle Wario. When Wario wakes up from his sleep, he realizes that his castle has not only been infiltrated by the Black Sugar Gang but that they have also placed it almost completely under water. At this point he doesn't know yet, though, that the gang has plundered his treasury, as well. After Wario has eliminated the remaining pirates and turned off the water tap, he inspects his treasure chamber and finds out that the pirates have robbed him, he takes up the pursuit immediately.

Outside the castle, the three pirates make their way with their loot to their ship, the SS Tea Cup, where their leader, Captain Syrup along with Bobo is waiting for them. Suddenly they realize that Wario is following them and think of a plan to get rid of him. In order to distract their pursuer, the three pirates chase his hen away from her nest. When Wario sees his hen flying away from the nest, he temporarily gives up the hunt for his stolen treasure to save his hen and bring it safely back to her place.

After the successful chicken rescue, Wario resumes his pursuit of the three pirates and it leads him to the SS Tea Cup. Wario infiltrates the ship and drops the anchor to prevent the pirates from sailing to Syrup Castle. Captain Syrup and the three Pirate Gooms carrying Wario's treasure flee the ship by hot air balloon to Maze Woods while fellow Black Sugar member Bobo tries in vain to take out Wario.

After his journey through Maze Woods and a nameless town, Wario finally reaches the pirate band's headquarters, Syrup Castle. Arriving at the castle Wario has to fight his way through the pirates stationed there to get to their leader. Captain Syrup tries to take Wario out with her flight machine, but he overpowers her in battle and claims his treasure back. When Wario leaves Syrup Castle with his treasure, the headquarters of the Black Sugar Gang is destroyed by an explosion like in the previous game, but it is not sure if this explosion was the work of Wario or of Captain Syrup herself.

Alternatively, the pirates occupy Wario's castle and kick Wario out while he is still sleeping. In order to initiate this event, the player must let Wario sleep for a few seconds by simply not pressing any button to prevent the slumbering treasure hunter from waking up in the first level. Afterwards the alternative route "Chapter 2: Invade Wario Castle, Story 1: To The Castle!" is unlocked. Thrown out of his own castle, Wario now tries to reclaim his home from the pirates. Arrived in his castle only Captain Syrup stands in his way. She controls a Mecha Kuri, a robotic giant spear man, to take Wario out but the treasure hunter takes care of the robot easily. After he has destroyed the robot, Wario kicks the captain and the Black Sugar Gang out of his reclaimed castle and goes back to bed afterwards. 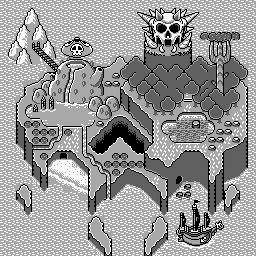 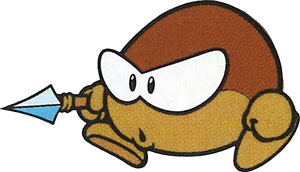 Pirate Gooms, the most common crew members of the Gang. 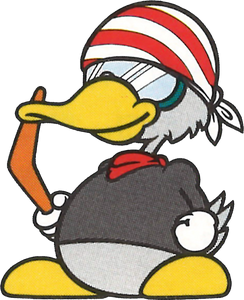 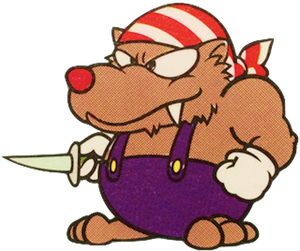 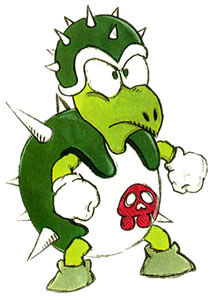 A high-ranking member and guardian of Rice Beach Spiked Pirate.