Villains Wiki
Register
Don't have an account?
Sign In
Advertisement
in: Urban Legends, Type Dependent on Version, Kidnapper,
and 23 more

Cruising the streets for potential victims.

Abduct and kill victims either for ritualistic purposes or criminal intent (dependent on story).

The Black Volga is the central antagonist of an urban legend in Poland and similar regions, mostly recorded around the 1960s to 1970s. Many variants of the legend exist but fall roughly into two fields, that of criminal conspiracy and that of occult conspiracy. Both involve a mysterious black Volga limo that travels the streets and abducts people for sinister purposes.

The most common belief involving the Black Volga is that it is driven by a gang of criminals who use it to kidnap victims for use in organ harvesting or child-slavery, since many targets were said to be children. There were also tales of it being used by a serial-killer who would pull up to ask people for the time; if a victim approached to do so, the killer would proceed to kidnap and murder them in a gruesome manner.

Another common belief was that the Black Volga was a demonic entity used by Satan or other high-ranking spirits of evil to capture souls, using a similar method to the serial-killer story. In these stories, the demonic car would ask for the time, and anyone who answered was cursed to die at the same time at the next day, but could save themselves by replying, "It is God's time", causing the demon to vanish.

Other occult-based tales involving the Black Volga had it driven by cultists who would kidnap children for blood rituals or Satanic ritual abuse. These stories sometimes also included members of the clergy such as nuns or priests, further suggestive of theistic Satanism.

While largely just a series of urban legends, the nature of the Black Volga myths may have been deliberately spread or intensified by Polish secret police in order to make claims involving actual kidnappings by the government seem invalid or ridiculous. Of course, as with all conspiracy theories, this has never been proven, and as such, most agree the Black Volga is a purely fictional entity. 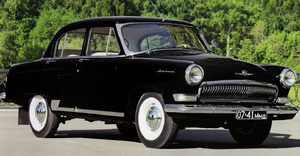