The Black Widow (alternatively known as "Spider Woman") was one of Space Ghost's villains. She was one of the most recurring villains of the original series, and also appeared on Coast to Coast and had a guest appearance on Johnny Bravo.

She controlled a planet full of spider-like aliens, the Tarantrapods, who could emit energy that would turn into webs and many times she has tried to have them kill Space Ghost, as well as man-eating spider plants. She also briefly had control of a planet of sea monsters, though by her time in the Council of Doom she had returned to using her Tarantrapods. Space Ghost has defeated her every time.

Her appearance is very witch-like, with pale gray skin, a black and red dress with long black gloves, a strange hat, bangs that look like spider legs and wrinkles that seem to either indicate old age or a constant, burning malice that has aged her face. She has a very shrill voice with a hiss-like lisp.

The Spider-Woman/Black Widow appeared on Space Ghost six times, making her one of Space Ghost's most persistent foes, rivaled only by the infamous Zorak. She is one of the members of the Council of Doom in the final episodes, and responsible for bringing the villains together. It could be argued that Black Widow was Space Ghost's true archenemy, though that honor is usually given to Zorak.

In Coast to Coast, it is stated that Space Ghost had her and the other members of the Council of Doom pardoned of their crimes in exchange for helping him on his talk show. Her appearance on Johnny Bravo continues this plot point, referring to her as a "reformed" supervillainess. However, Johnny's mistreatment and rejection of her during their blind date causes her to snap and return to evil, attempting to execute Johnny before he is rescued by Adam West.

The Black Widow is very cruel, gaining entertainment from watching her victims struggle. Instead of killing her victims outright she will often play with them in sadistic ways that lead to their death. When she captures Space Ghost, she prefers to force him to fight her minions in an arena for her entertainment. Despite this, she is not without honor, giving Space Ghost a weapon to defend himself during his first battle and allowing him to keep his power bands in the next. She is also shown to have a bad temper when things don't go her way.

In Space Ghost Coast to Coast, she seems to have professed love for Space Ghost much to the chagrin of the other villains. It is possible that her unrequited love for Space Ghost was a motivating factory her turn to evil, and her hatred of Space Ghost in particular, him having broken his heart before the series. In Johnny Bravo, it is revealed she has a problem with rejection, further lending credence to this theory. In Coast to Coast She is known for her scream that irritates Space Ghost and fellow villains, of which she seems to burst into at random for no other reason that to torment everyone in the room.

In Coast to Coast and Johnny Bravo, she seems to make a genuine effort to reform her evil ways, actively avoiding villainous cliches, being far less manipulative, living in a modest cottage and attempting to be a model citizen. However, she is shown to have developed an explosive temper and often slips hack into villainy when frustrated. Her time with Johnny Bravo pushes her to her breaking point, and she returns to villainy with Johnny Bravo and Adam West as her first targets. Despite all of this, she later states she would happily go out with Johnny again.

She rarely, if ever, is seen fighting herself, preferring to send her minions to fight her battles for her. She seems to have a psionic link with her insect minions and can command them to follow her will easily. She has a very manipulative, dominating personality and can easily impose her will on smaller-minded creatures, either through bribery, intimidation or brainwashing. Her skill for subterfuge and leadership allowed her to play a primary role in creating the Council of Doom.

In Coast to Coast, she possesses a powerful scream, though it's likely this is less a superpower and more a consequence of the aforementioned shrillness of her voice. In Johnny Bravo, it is revealed she also possesses an array of powerful gadgets, such as a web-shooter on her wrist she uses on an hapless waitress, and the gem on her hat is revealed to fire a powerful laser.

At some point in her history, Black Widow got a blind date with Johnny Bravo on a reality show created and hosted by Adam West. In the Johnny Bravo episode "Adam West's Date-O-Rama" the mismatched pair struggle in vain to try to make the date work, but Widow's angry, violent personality and Johnny's bumbling idiocy make the evening a complete disaster. Here it is revealed she is an animal lover (fitting, as in the original series all of her henchmen were insects and sea creatures), owning a cat named "Mr. Kitty" and an unnamed frog, in addition to her army of insect aliens. On her date with Johnny, one of the locations she chose to visit was a petting zoo. In the episode, it is implied she is a cannibal and ate her last boyfriend, though she isn't proud of it.

In the Scooby-Doo, Where Are You? episode, "Don't Fool with a Phantom", Scooby-Doo and Shaggy Rogers are hiding from the Wax Phantom with a wax figure that looks like Black Widow. 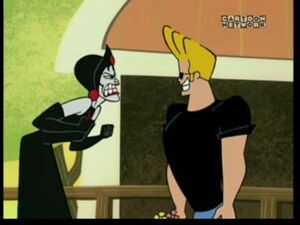 Black Widow, enraged by Johnny's buffoonery during their blind date. 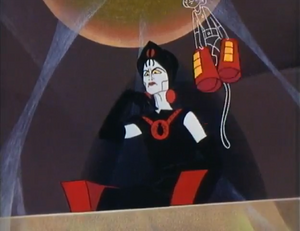 Black Widow on her throne 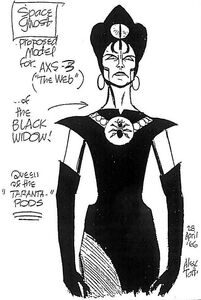 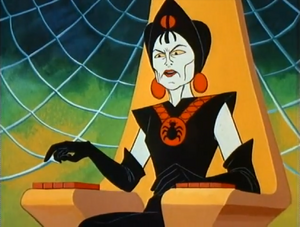 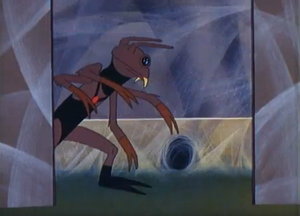 A Tarantapod, one of Black Widow's favorite minions. 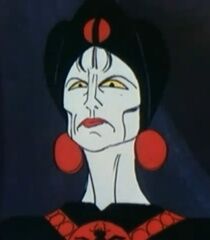