Member of Ultimates
Anti-American terrorist
Member of the Liberators

None beyond pretending to be a hero

Destroy the United States, out Bruce Banner as the Hulk (succeeded).

In the Ultimate Marvel Universe Black Widow, normally a heroic character here only pretends to be good and in actuality is a rabidly anti-American terrorist who conspires to help bring about the downfall of the United States alongside a group of supervillains called the Liberators.

Black Widow is first introduced alongside Hawkeye as a SHIELD black ops agent who is promoted to Ultimates member. She and Hawkeye aid the other Ultimates in stopping the Chitauri invasion, but this is only part of Black Widow's cover.  She later secretly outs Bruce Banner as being the Hulk, who in this continuity had committed genocide during his rampage in New York.

Black Widow's sabotaging of the Ultimates continues when she murders Hawkeye's family in cold blood, with her ally Loki framing Captain America for the crime. Black Widow next betrays Tony Stark, who she had become engaged to, and murders Jarvis by shooting him in the head, also mocking Tony's loss. Tony however, turns the tables on Natasha and knocks her out by smashing a whine glass over her head. Black Widow is later killed by a vengeful Hawkeye while recuperating in a hospital, who tells her to burn in hell. Her identity is later taken by the much less villainous (but no less unpleasant) ex-wife of Nick Fury Monica Chang. 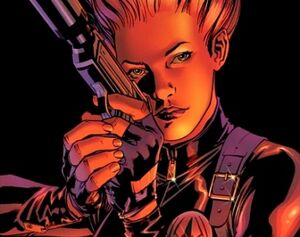 Black Widow on a mission. 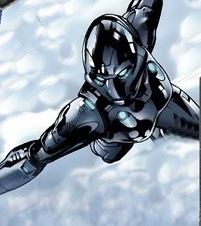 Retrieved from "https://villains.fandom.com/wiki/Black_Widow_(Ultimate_Marvel)?oldid=3700850"
Community content is available under CC-BY-SA unless otherwise noted.