Blackarachnia is one of the Predacons under Megatron's command and a major antagonist in Beast Wars: Transformers. She later joined the Maximals in the third season of Transformers: Beast Wars and its sequel Transfomers: Beast Machines.

Blackarachnia was born from one of the Maximal fallen Stasis pods. Tarantulas, watching a black widow fight and devour another spider, was inspired. Megatron, observing the slim and attractive Blackarachnia transform and strike a few poses, suggested that he had "ulterior motives behind her beast form selection." But, she was a Predacon, and that was what was important.

Blackarachnia made herself renowned among the ranks of both the Maximals and Predacons as a severe headache to Megatron. When Tarantulas found out about the Vok, he tried to craft a stasis pod escape ship for himself, and she was there to forge a partnership Spider's Game. When Scorponok and Blackarachnia journeyed to a mysterious, floating island containing immense power, she was there to shove him out of the way and take control of the island herself, only to be defeated by Tigatron. When Starscream took control of Waspinator's body, she was right next to him when he betrayed Megatron, betraying Starscream in return.

When she aided Tarantulas in breaking into the Axalon to acquire a stasis pod for conversion into an escape ship, she took over after a following Inferno incapacitated Tarantulas, intending to take the ship for herself. Other Voices, Part 1 Unfortunately for her, this deception backfired on her in the form of a forced mind link between her and Tarantulas, which remained until she forced the spider into breaking it. When Tarantulas forced her to investigate Megatron's Golden Disk backups, she waited until Tarantulas was occupied to download and encrypt the recoverable information.

When the Vok were moments away from returning, Tarantulas and Blackarachnia again teamed up in an attempt to flee the dying planet. Megatron, already aware of their next move, used their deceptive tendencies against them and acted unaware of their treachery. As they built their escape ship, he installed his own variant on the design, making it inescapable once sealed and in space. Though it did not destroy either of them, the result was even better: Optimus Primal wound up in the pod and was destroyed instead. Other Voices, Part 2 Blackarachnia's wits saved her, as she convinced Megatron that he would need soldiers, which gave him reason to spare her life. She also, much to her disgust, ended up with a telepathic link to Tarantulas which allowed him control of her body.

Forced by Tarantulas to hack into Megatron's private files and Golden Disk back-ups for him, she discovered that it contained the access codes for the Ark. Taking advantage of his temporary deactivation, she downloaded a copy, destroyed the files and told Megatron Dinobot destroyed them, while telling Tarantulas a different story, that Megatron had booby-trapped them. Coming of the Fuzors (Part 2) Neither of them (apparently) believed her, but neither showed this openly yet — Meanwhile, Blackarachnia forced Tarantulas to end their psychic link by threatening to kill herself and take his mind with her. She also had Silverbolt refuse to fight her because she was female (to the annoyance of Rattrap).

When an energon blast sent her and Silverbolt into the middle of the dense jungles, they were forced to work together. Though attracted to the Fuzor, Blackarachnia was endlessly frustrated by his seemingly idiotic chivalry and need to treat her specially. Megatron, listening in to their commlink chatter, was disgusted by the obvious romance going on. Blackarachnia rather liked the treatment and affection, though she held it under a firm charade of bitter irritation. When the Predacons attacked the valley of proto-humans, Blackarachnia was teamed with Inferno. She did considerable damage to Dinobot before being blasted herself.

After confirming the location of the Ark, Megatron sent Waspinator to its location. Realizing what this meant, Blackarachnia abandoned her post and followed him. Silverbolt followed her and stubbornly refused to leave her alone. Exhausted and in a hurry, she conceded and told him to dig. The two broke through the mountainside and Blackarachnia had a good cackle over the Ark's power being hers, just as Megatron arrived. Having always intended for her to reach the Ark as he knew she had the access codes, he threatened to vape Silverbolt unless she did what he said. Bitterly, she agreed to his demands.

Blackarachnia used the Ark's security system to cover Megatron's back, not sure of what he was planning. Once he fired upon Optimus Prime, history began to change, wiping out all Maximals, which included herself. Not willing to die for Megatron, she activated Teletraan I's security nets to force Megatron off the ship. With Silverbolt's help, she got the dying Autobot leader under life support and began the repairs. The Maximals, recognizing what she had done, reluctantly allowed her to join their ranks after an irate Megatron gave her the boot (in the form of nearly killing her). Optimal Situation (Quite what 'he'd intended to do with the Ark, since she couldn't have altered the timeline without risking erasing herself, was never explored.) 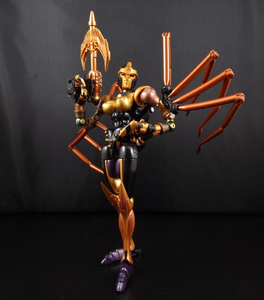 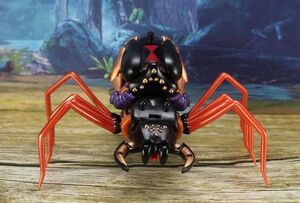 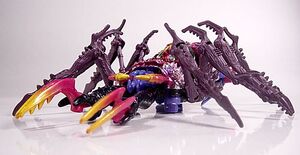 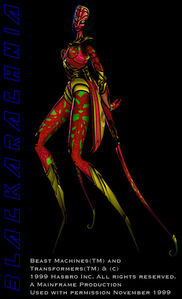