The Pirate all Pirates fear
The Original Nightmare

Burning up innocent fairies by fire.

Kill Peter Pan in order to prevent him from interfering with his plans and stop a prophecy from coming true.

Edward Teach, better known as Blackbeard, is the main antagonist of the 2015 fantasy adventure film Pan, the prequel to the Peter Pan story.

He was portrayed by Hugh Jackman, who also played Keller Dover in Prisoners, Vincent Moore in Chappie, and X-24 in Logan.

Blackbeard was the leader of the Pirates, and as described by his first-mate Bishop that he was "The Pirate all Pirates fear", thus indicating that he was much more greedy, arrogant, villainous, and callous amongst the Pirates of Never Land. He commanded the pirates to kidnap the children of Lamberth's Home for Boys, as well as Peter, to perform labor in the Mines of Never Land in search for Pixels or Pixie Dust for his personal gain.

Blackbeard is portrayed as of being capable to wield a gun and sword as shown in various scenes in the film. Despite appearing pleasant in his own decietful way, deep down the character was manipulative, egocentric, selfish, and shows a very thoughtless and abrasive attitude towards the children and his crew.

He himself told the children and the miners that he shows no mercy and that he doesn't give any second chances, as seen in one of the movie scenes, when three boys (including Peter) are on the plank, he mercilessly kicked them or either jump in the plank in order for the child to bounce and jump to his death.

He also killed several natives including the Chief, Princess Tiger Lily's father. Blackbeard was said to be in love with Peter's mother, Mary, but due to her sweet and loving personality the Fairy Prince took her away. Thus the result of Blackbeard's attitude driving Mary to love the Prince instead of him, which made Blackbeard produce hatred to the fairies and kills them or use them to make him young again.

Thus furthering his agenda towards becomimg more sadistic than he already was. Blackbeard share several traits with Captain James Hook from the 2003 Peter Pan film.

In retaliation for the boys' mischief, Mother Barnabas summons pirates who kidnap Nibs and several others. Nibs managed to jump off the pirate ship and escape but Peter did not, he was captured and taken to Never Land, a magical realm beyond space and time, where he is forced to become a slave laborer and mine for fairy dust on behalf of the ruthless pirate leader Blackbeard ,who introduces himself before Never Land's miners. Later ,Blackbeard meets with Peter and tells him about a prophecy in which a kid arrives to fight him and comes back as adult to kill him.

Final Battle with The Group

Chief Great Little Panther is murdered by Blackbeard, who also reveals he killed Peter's mother. Peter, Hook, and Tiger Lily escape in a raft and head to the Fairy Kingdom to enlist their help in defeating the pirates. Along the way, Peter falls into the river and is nearly eaten by a crocodile before being rescued by the mermaids, after which he has a vision of Blackbeard accidentally killing Mary as she defended the Fairy Kingdom from his offensive.

Despondent over their chances, Hook leaves, while Peter and Tiger Lily arrive at the Fairy Kingdom only to be ambushed by Blackbeard, who uses the pan flute pendant to open their gates and launches an attack. Peter escapes and befriends one of the fairies, Tinker Bell. Together, they rally the fairies to fight the pirates, and are joined by Hook, who has returned and fights Blackbeard's right-hand man Bishop aboard the stolen ship which actually tips over and sending him to his death.

Peter conquers his fears and flies to save Hook, while Blackbeard and his men are overpowered by the fairies. Forced into an abyss, the pirates subsequently fall to their deaths. 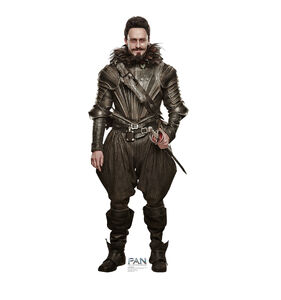 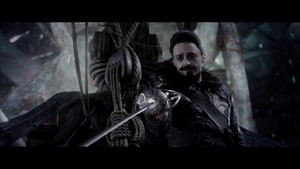 Blackbeard with his sword. 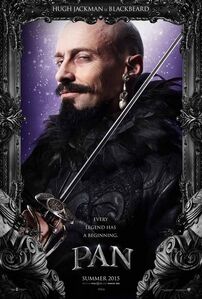 A poster of Blackbeard. 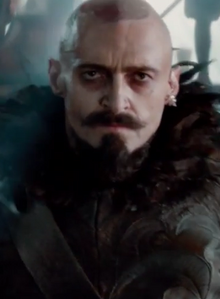 Blackbeard angry after losing his wig. 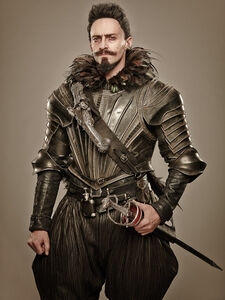 Blackbeard's demise as he and his crew fall into the bottomless waterfall.
Add a photo to this gallery

Retrieved from "https://villains.fandom.com/wiki/Blackbeard_(Pan)?oldid=4261298"
Community content is available under CC-BY-SA unless otherwise noted.