Blackbeard (Pirates of the Caribbean)

Pirates of the Caribbean: On Stranger Tides

Captain of the Queen Anne's Revenge

Commanding The Queen Anne's Revenge.
Making people afraid of him.
Using his sword.

Use Jack Sparrow to lead him to the Fountain of Youth (succeeded).

Drink Water from the Fountain of Youth mixed with a Mermaid's Tear from the Chalices of Ponce de Leon in order to gain eternal life and cheat the prophecy of his fate (failed).

He is an infamous pirate, based on the real-life pirate of the same name, who wishes to claim the Fountain of Youth for himself. He is also a pirate that every pirate in the world is afraid of (presumably and arguably apart from Hector Barbossa and Davy Jones), due to his supernatural powers and ruthlessness.

He was portrayed by Ian McShane, who also played Judas Iscariot in Jesus of Nazareth, Dr. Brinkman in Agent Cody Banks, Iofur Raknison in The Golden Compass, Tai Lung in Kung Fu Panda, the Other Mr. Bobinsky in Coraline, Leigh Emerson in American Horror Story: Asylum and Winston in the John Wick film series.

Captain Blackbeard was the pirate that all pirates knew and feared, as he was utterly ruthless, malicious, egotistical and sadistic, valuing his own success above everyone else's. The dark captain sailed the seas and, as the years passed, his age began to catch up with him. Therefore, he sought the legendary Fountain of Youth and became far more serious with his goals when he had to deal with Hector Barbossa and Jack Sparrow. The pirate was known to be argumentative and cruel to his prisoners, often torturing them mostly for his own selfish amusement, even admitting that seeing anguish, pain and suffering make him closer to God.

On rare occasions, he has shown to have a form of affection for his daughter, Angelica Teach, having her entrusted under the care of nuns to ensure her well being. After his vicious pirate years, he devoted himself into teaching her the ways of a worthy pirate, teaching her his ways of sword-fighting and various other skills. Blackbeard even told Jack Sparrow that his daughter was the only good thing he's ever done in his life. In the end though, it was clear that Blackbeard saw her as a pawn like everyone else, as he was perfectly willing to threaten and sacrifice her in order to get what he wanted, especially when he chose to save himself rather than his own child, which ultimately resulted in his death.

Blackbeard has also shown to have very little regard for the life of mermaids, viewing them as insentient beings. As such, when he captured one of them, Syrena, he went out of his way to be as cruel and vile as possible, resorting to tactics that involved toying and manipulating with Syrena's feelings for Phillip, as well as subjecting her to emotional torture by falsely murdering Phillip in front of her, so that he may get her tears that would lead him to the Fountain of Youth.

Between At World's End and On Stranger Tides

Blackbeard attacked the Black Pearl without being provoked, capturing the crew in the ship's own riggings. However, Hector Barbossa escaped by chopping off his foot. Blackbeard shrunk the ship down with his voodoo magic and placed it in a bottle.

Having received a prophecy that a one-legged man would end his life from the quartermaster, Blackbeard began seeking Jack Sparrow, who was said to have been to the Fountain of Youth, which could save his life. He sent his daughter, Angelica to pose as Jack and recruit more crew-members with the possibility of capturing Jack. His plan was successful; he forced Jack to lead them to the Fountain with the threat of a voodoo doll. He captured a mermaid for her tear as part of the ritual to gain the years of life from another, and badly wounded the missionary she was in love with to get it. Succeeding in getting to the Fountain of Youth, he once more met Barbossa, the one-legged man in the prophecy and fell victim to a poison sword stab. Jack then tricked him into drinking from a chalice without the mermaid's tear in it to save the life of his daughter, who had also been poisoned by the sword. Blackbeard was subsequently stripped of his flesh and reduced to nothing more than a skeleton, which then crumbled to dust.

Blackbeard does not appear in Dead Men Tell No Tales (due to him being long dead) but he is briefly mentioned by Barbossa when he restores the Black Pearl to its normal size which undoes Blackbeard's actions.

On the Pirates of the Caribbean attraction, after the boat goes through many skeletons, the passengers will see Blackbeard in the mist, replacing Davy Jones. 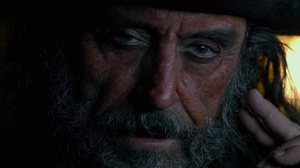 Blackbeard on board his ship. 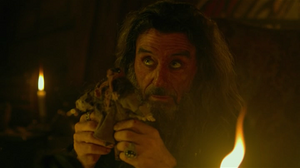 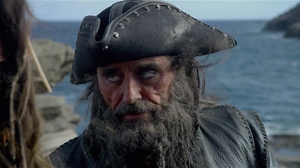 Blackbeard leads the hunt for the Fountain of Youth. 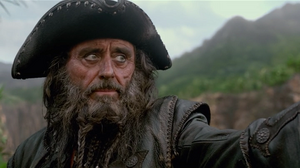 Blackbeard forcing Jack to jump off a cliff into a river. 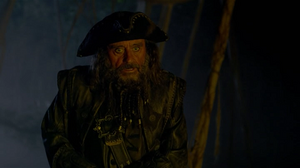 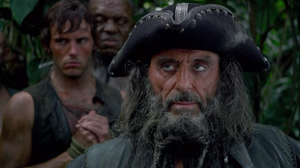 Blackbeard conversing with Jack on their way to the legendary fountain. 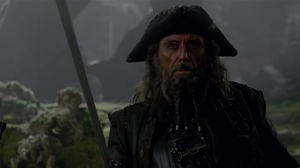 Blackbeard at the Fountain of Youth and about to fight Barbossa. 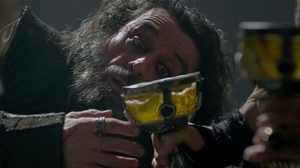 Blackbeard drinks from a magic chalice in order to save himself from death. 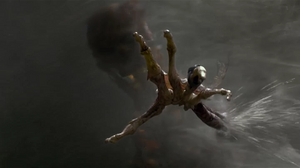 Blackbeard is reduced to a skeleton after drinking from the wrong chalice, killing him. 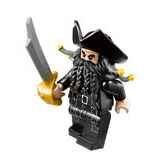 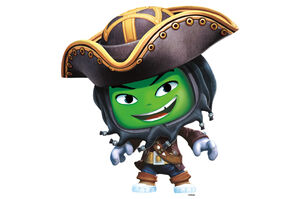