Blackbriar Thorn is a DC Comics supervillain. He was created by Len Wein and Joe Kubert, the character first appeared in DC Comics Presents # 66 (Feb 1984).

Blackbriar Thorn was a High Priest of the ancient Druids of Cymru. While his entire sect is massacred by attacking Roman forces, Thorn absconds to the surrounding forest. Attempting to escape capture, he transforms himself into solid wood, hiding amongst the trees. Unfortunately for Thorn, the agony of his dying comrades creates a geological upheaval which buries his newly arboreal form underground.

Millennia later, Blackbriar Thorn's body is unearthed by an archaeologist and subsequently displayed at The Gotham City Museum of History. When moonlight strikes the statue on the night of its unveiling, Thorn is revived and begins to wreak havoc upon the Museum and its patrons, counted among whom are alter egos of Superman and Etrigan the Demon. The mismatched heroic pair's actions drive Thorn to retreat into the city, where he later rampages in a plot to procure a new body—that of Superman. Together, Etrigan and Superman defeat Thorn, ostensibly rendering him incorporeal.

Blackbriar Thorn appears, seemingly in human form, during the Crisis on Infinite Earths. He, Etrigan, and other assembled mystics lend their combined energies—channeled through Doctor Occult and Green Lantern Alan Scott—to successfully defeat the Anti-Monitor's Shadow Demons, which had been ravaging the Earth.

Ostensibly disembodied once more and said to have lingered in Gotham Park since his prior defeat, Thorn is later channeled by a stage psychic at the behest of John Constantine to provide information about pending calamity in The Green.

Blackbriar Thorn next appears (again, with a human appearance) as an agent of the demon Neron in a demonic realm called The Abyss. Holding captive the soul of Mollie Scott as bait, Thorn attempts to ensnare her husband, Alan Scott, but, in defeat, is surprised to find Alan no longer vulnerable to wood.

As part of Johnny Sorrow's version of the Injustice Society, a more woody-looking Thorn and his teammates are defeated by Wildcat as they invade the JSA's Headquarters. Thorn's defeat left his body splintered, one shard of which is kept on display in JSA Headquarters. Though able to regenerate, Thorn lies dormant until the Injustice Society's next attack. Using a crossbow, Injustice Society comrade Tigress shoots the splintered sliver of Blackbriar Thorn into Alan Scott's chest. Apparently once more susceptible to wood, Scott is gravely wounded as Thorn regenerates from the embedded projectile and proceeds to inflict more damage. Thorn is ultimately defeated in this siege on the JSA by Stargirl.

Blackbriar Thorn appears most recently in Day of Vengeance battling the Spectre, who, influenced by Eclipso, attempts to kill all magic wielders in the DC Universe. The combatants appear in gigantic form greatly dwarfing onlookers. Thorn loses the battle, but delays his next regeneration in order to lend his powers, along with many other mystics, in a combined effort to defeat the rampaging Spectre.

Blackbriar Thorn was among the villains in the ambush of the JSA led by Tapeworm.

Blackbriar Thorn is one of the villains in the TV show; Young Justice. He along with Klarion, Wotan, Felix Faust, and Wizard, were performing a ritual to create two dimensions, one with adults but no one under 18, and one with children, but no one above 18.

Blackbriar Thorn has exhibited a plethora of abilities, including manipulation of the weather, extensive control over vegetation—either living or dead, the ability to regenerate from even a sliver of his physical form, creation of illusions. Thorns abilities are terran-based and, as seen in his debut, he can draw extensive strength and abilities though physical contact with the Earth itself. Inside buildings, he still retains the ability to control surrounding plant life, animating it to his will and frequently increasing its volume and strength. Thorn's organic manipulation of his own woody form, including the projection of tendrils and vines, appears to be uninhibited when separated from terra firma as well 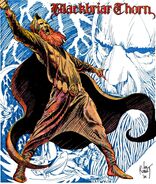