Blackfire
Blazin' B (by Beast Boy)
Sister (by Starfire)

Become much better than Starfire.

Blackfire is a recurring antagonist in Teen Titans, serving as the main antagonist of the episodes “Sisters” and “Betrothed”. She is the archenemy and older sister of Starfire, and the two are polar opposites.

She was voiced by Hynden Walch, who also voices Madame Rouge in the same series and Harley Quinn in The Batman and the DC Animated Film Universe.

Blackfire first appeared when she arrived on Earth in the episode "Sisters". She gave Starfire a jewel and pretended to enjoy being reunited with her. Blackfire won the Teen Titans' support by having fun with them and telling them stories of adventures she had throughout her travels in the galaxy. The Titans seemed to like her so much, Starfire was beginning to think they wouldn't need her around anymore. She was especially unhappy with her sister's attempts at flirting with Robin. When Starfire thought of leaving Earth, the Centauri Police showed up and captured her. The Titans rescued her and explained to the Centaurians that they have captured the wrong Tamaranean. The Titans then discovered that Blackfire had framed Starfire for crimes by giving her a stolen jewel from the Centauri System. Blackfire, who was leaving Earth at that exact moment, was defeated by Starfire and taken to prison, swearing revenge on her sister.

Blackfire later broke out from prison and wrested control of Tamaran as its new Grand Ruler. Blackfire attempted to get revenge on Starfire by forcing her to marry Glgrdsklechhh. This was actually part of an elaborate plot between Blackfire and Glgrdsklechhh; by marrying Starfire to Glgrdsklechhh, he would reward Blackfire with a very powerful jewel. When her ruse was uncovered, Blackfire was once again defeated by Starfire and banished from Tamaran. Blackfire was one of the only villains missing from the lineup of the Brotherhood of Evil, suggesting that she was not out to get all the superheroes, or even the Titans, but simply to just take out Starfire.

Blackfire was intended to return to the show and serve as the main antagonist of what would have been the sixth season. However, the show was canceled by Cartoon Network before such a season could be produced.

Like her sister, maybe even more so, Blackfire is shown to be very beautiful. She has a long head of black hair, wears a black crop top, a black skirt, and a pair of black knee-high boots.

Blackfire loves thrills and causing trouble and does not seem to be remorseful about anything she's ever done. The two do not exactly get along well, as Blackfire is constantly trying to, in some way, do away with Starfire, first with getting her arrested and then trying to marry her off to an ooze monster. Blackfire loves fighting her sister, and not just fighting her, but rubbing in the fact that she is older and stronger in her little sister's face.

The two of them are poster children for sibling rivalry. 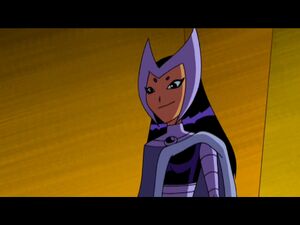 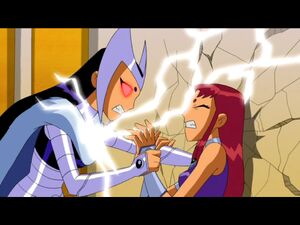 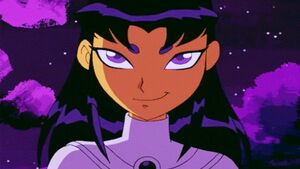 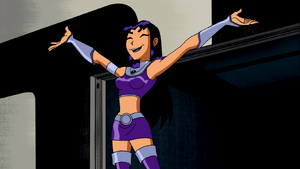 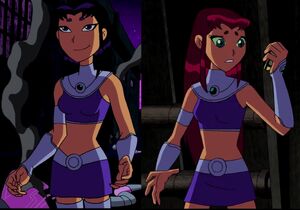 The resemblance between the two sisters 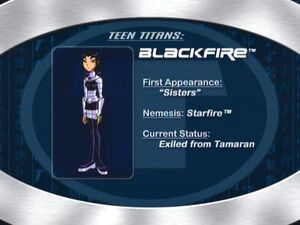