Skilled use of his mace
Usage of gadgets
Strength

Defeat White Dragon.
Take over the Warrior nightclub as turf for Neron (all failed).

Blackguard is a supervillain in the DC Comics universe and an enemy of Booster Gold. He was a member of the Suicide Squad for a brief period of time before getting killed by The General.

Blackguard was hired, empowered and outfitted by the conspiracy called The 1,000. Presumably, he already had a criminal career as a thug before they hired him. He accompanied a squad of troops to steal some satellite tech from S.T.A.R. Labs. However, their vehicle was intercepted on the way home by Booster Gold. Even though Blackguard was wearing a fairly strong suit of armor. However, Booster tricked him into hitting a power terminal. This shocked Hertz unconscious.

This was not Blackguard’s first failure when serving The 1,000.Thus, their Director decided to have him disciplined. He sent in a more competent merc, Mindancer, who busted him out of prison. When the Director advised Blackguard that they were unhappy with his performance, Hertz got violent and was knocked out. His employer decided to execute him, along with the recently-captured Booster Gold. Metropolis vigilante the Thorn rescued them. Blackguard prepared to fight along with Booster and the Thorn but Mindancer took over his mind. The mesmerized Blackguard was sluggish and practically devoid of initiative. As a result he was beaten by Skeet, Booster Gold’s robot sidekick. He seemingly recovered his fee will when he woke up, and managed to flee.

The demonic lord Neron offered Faustian deals to many villains throughout the DC Universe. Blackguard apparently asked not to be stupid anymore. He was given what seemed to be at least average intellect.

As part of his service to the Hell-lord, Blackguard was teamed up with Earthworm and Cheetah. They were to claim Warrior’s, Guy Gardner’s superhumans-themed bar, as turf. During the clash Blackguard was seemingly incinerated by Guy Gardner, who at that point was in an altered psychological state.

When Blackguard was seen years later, he was alive and unburned. He had done his time in prison. Hertz was apparently fully reformed, and received excellent recommendations from his parole officer. He was also on friendly terms with Guy Gardner (perhaps after exchanging letters while he was in prison). Thus, they decided to open a bar together. The dive, situated next to the office of the “Super Buddies” in Queens was named the Dark Side. The name came from a previous supervillains bar, but with no relationship with the Dark Side Club that would open years later in Metropolis. As they opened the Dark Side, it became obvious that the improved intellect granted to Hertz by Neron was long since gone. However, Hertz apparently relapsed into crime, and was arrested. He was thrown into the Belle Reve prison in Louisiana seemingly for several years.

When Amanda Waller was dismissed from the modern version of Checkmate, she continued operating her Suicide Squad. She showed an interest in Blackguard as a member.

After some training and tests, he was made part of a slash-and-burn mission at the corporate headquarters of Haake-Bruton. H-B was the company behind the development of a weaponized virus. It had the potential for being an extinction-level event trigger.

On this op Blackguard was part of the heavy squad, along with Marauder, White Dragon and the General (Wade Eiling). They were tasked with engaging and destroying a number of guards wearing replicas of the cybernetic Carapax armor. During the operation, part of the team turned traitor. As a result, Blackguard was beheaded by the General.

Blackguard will appear in 2021 film The Suicide Squad as one of the protagonists were he will be portrayed by Pete Davidson. 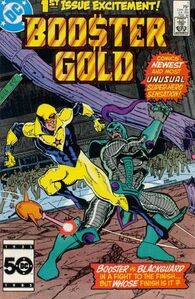 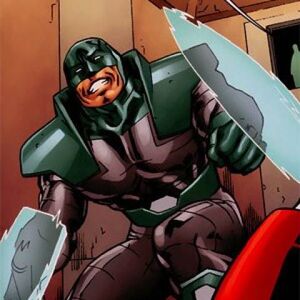 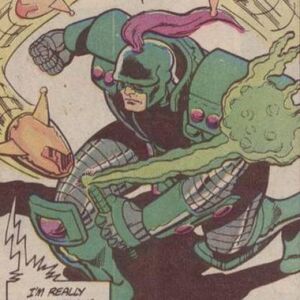 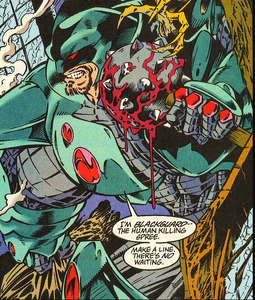 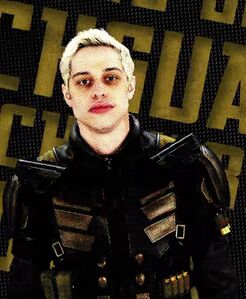 Blackguard in The Suicide Squad.
Add a photo to this gallery

Retrieved from "https://villains.fandom.com/wiki/Blackguard?oldid=4277836"
Community content is available under CC-BY-SA unless otherwise noted.