NOTE: This article is about the incarnation of Black from the DC Extended Universe. The mainstream version can be found here: Blackguard.

Richard Hertz, better known as Blackguard, is a minor but pivotal antagonist in the 2021 film The Suicide Squad, the tenth installment of the DC Extended Universe.

He was a dim-witted and immature criminal who became a member of Task Force X's first "Project Starfish" team who in a vain effort to save himself and gain his freedom attempted to give up his teammates to the Corto Maltese military.

He was portrayed by Pete Davidson.

Blackguard was a criminal imprisoned at Belle Reve who was given the opportunity by Amanda Waller to join Rick Flag's first Task Force X team for a mission in Corto Maltese which he accepted. Upon arriving he continuously messed with his escort by pretending to pull out one of his pistols multiple times much to the guard's annoyance and the amusement of Blackguard himself. Following these he boarded the helicopter and was sat next to The Detachable Kid and Weasel, Blackguard then questioned if Weasel was a dog much to the amusement of Captain Boomerang who mockingly asked him what kind of dog he thought Weasel was, in response The Detachable Kid suggested he was an Afghan Hound while Harley Quinn excitedly suggested he was a werewolf prompting Blackguard to panic and demand to be let off of the helicopter until Rick Flag calmed him down by explaining what Weasel actually was.

When the team arrive at the drop off point they all begin swimming to shore and ducking for cover. Just as Rick Flag is briefing the team on what to do however Blackguard unexpectedly stands up and announces his presence to the military while walking onto the beach much to the chagrin of the rest of the team. Although Blackguard believes they'll accept his surrender one of the soldiers instead opens fire on him almost immediately, blowing his face clean off and killing him.

Inadvertently Blackguard caused the mass wipe out of Flag's team that followed, with only Harley Quinn, Rick Flag, T.D.K. (and Weasel who everyone mistakenly believed to have drowned) surviving.

Blackguard is a very dim, obnoxious, self-serving and rather petty man who cares little for the lives of anyone else but himself and always acts in a manner to deliberately annoy others. He is also rather gullible and naïve based on how he first assumed Weasel was a dog and later a werewolf and from how he assumed that the Corto Maltese military would spare his life.

Blackguard was a handsome man in his twenties with fair skin, brown eyes, black eyebrows and platinum blonde hair. His typical attire consisted of his combat suit which was a black leather bodysuit with gold accents and many holsters and ammo pockets. 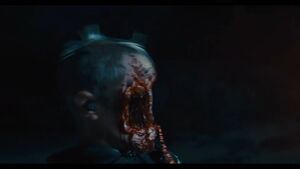 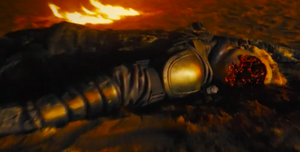