The Son of the Devil

Antagonizing Blaze and his father.

Claim the Contract of San Venganza in order to make Hell on Earth (briefly succeeded).

Blackheart is the main antagonist of the 2007 Marvel movie Ghost Rider.

He is the malicious, demonic son of Mephisto who wanted to destroy Earth by spreading Hell's influence over the world.

He was portrayed by Wes Bentley, who also played Thomas Barclay in P2, Edward Mordrake in American Horror Story: Freak Show and Seneca Crane in The Hunger Games.

Throughout the film, Blackheart has more of a human appearance than his comic counterpart. He has pale white skin and is wearing all black. In his satanic Legion form, Blackheart's skin becomes dark blue, his eyes turn red and he gains razor sharp teeth, and horns on his head.

He is the son of Mephistopheles. He's been trying to overthrow his father because he believes that his father is weak and old. He came to Earth to find the Contract of San Venganza so he can absorb the 1,000 lost souls within it to make him more powerful. He teams up with three other demons, named Gressil (Demon of Earth), Abigor (Demon of Wind), and Wallow (Demon of Water).

Blackheart manages to knockout Ghost Rider, giving him enough time to absorb all the lost souls. After doing so, his appearance changed slightly and changed his name to Legion. Because he had all the souls, he was more powerful, but it left him vulnerable to the Penance Stare. Ghost Rider manages to use the Penance Stare on Legion, causing him to see all the pain and suffering the thousands of souls cause. This caused him to lose all of his powers and presumably killed Blackheart. 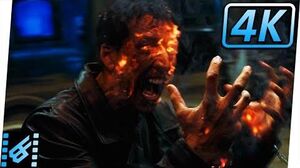