Can turn into a Sikorsky MH-53

Kill the Autobots and the humans (all failed; succeeded in Transformers: The Game, Decepticon campaign)

Blackout (also known as the Hound of Megatron) is a major antagonist in the 2007 film Transformers. He is one of the Decepticons who is loyal to Megatron.

In the video game adaptation(s), he is voiced by Noah Nelson, who also voiced Cunningham in Metal Gear Solid: Portable Ops.

Blackout flew into the airspace of US SOCCENT Forward Operations Base in Qatar and refused to identify himself, prompting base commander Colonel Sharp to dispatch two F-22 Raptors to escort him into their base. One of the Raptors reported that Blackout had the registry number of 4500X on his vertical stabilizer, the number of the helicopter Blackout had scanned and destroyed three months earlier in Afghanistan. Once landed, Blackout was surrounded by the soldiers stationed at the base and ordered to power down and disembark his crew, or deadly force would be used. Seeing no reason to hide himself any further, Blackout transformed under a hail of automatic weapons fire from the shocked humans. Activating his heavy machine guns and rocket launchers, Blackout made quick work of the soldiers closest to him, then unleashed a massive shock wave that killed the rest of the troops and shattered their vehicles and the windows of the operations control tower. Blackout made his way around the base, tossing tanks aside, crushing soldiers underfoot and blowing up aircraft. Eventually, he reached the operations bunker and tore off the roof to link up with their server and download its files in an attempt to find information on Project: Ice Man. The base commander cut the physical hard line of the server, severing Blackout's connection and thwarting his mission.

Blackout carried out his second objective, which was destroying the human base. As he proceeded, a human soldier was nearly crushed. Instinctively, the soldier recorded images of Blackout, the Decepticon looking straight back at the human. Blackout then activated a chest-mounted laser cannon to kill the human, but before he could do so, he was struck by a grenade fired by another soldier, and the human made his escape. Enraged, Blackout fired flare countermeasures into the sky to confuse any other attempts to attack him, then ejected Scorponok from his back and sent his minion to track the fleeing soldiers. Blackout then turned his attention and his weapons back to the rest of the base, eventually destroying it, leaving no survivors.

Evidently, after the attack, Blackout flew back to the United States, as he was in the vicinity when Frenzy reported the discovery of All Spark's location and Starscream ordered their forces to mobilize. Blackout was the last to acknowledge the order, then rallying in Megatron's name.

Blackout arrived at Mission City just as the final battle was getting underway. He attempted to block Sam's path as the boy was trying to get away with the All Spark, before he was attacked by Ironhide. The Autobot threw a car at Blackout, who fired his laser cannon to destroy the vehicle and knock Ironhide over. He flew ahead of Sam, attempting to use his rotor weapon to kill him, but the human managed to dodge this attack.

Blackout withdrew from the battle for a few moments, but returned as Optimus Prime and Megatron fought. Seeing his master under attack, Blackout came to the defense of his lord by activating his hand-held rotor weapon, but soldiers—including survivors of the SOCCENT base attack—attempted to stop him by painting him with targeting lasers for F-22 Raptors to fire upon. As Blackout activated his cannon, he noticed the lasers targeted on him. Blackout tried to finish them off until Captain Lennox, using an abandoned motorcycle, charged at him and fired a sabot round into his crotch, as F-22s pounded the Decepticon with missiles, extinguishing his spark.

His remains were dumped in the second deepest part of the ocean - the Laurentian Abyss - along with his fellow dead Decepticons.

Blackout made a small appearance as a member of Team Chaar in Transformers Animated, depicted as a immensely powerful, if dimwitted brute. He retains his shock wave ability from his film incarnation. He is voiced by Bumper Robinson.

Supplementary materials depict Blackout as a member of the Decepticon Heavy brigade during the Great War, a counterpart ot the Wreckers. When they finally met in battle, the Wreckers were all destroyed (including their vessel, the Omega Sentinel Zeta Supreme), and Blackout was the only Decepticon survivor. He continued wearing the Brigade's symbol on his shoulders, partly to honour the fallen, and partly to announce that he's a living Heavy Brigade. Later in the war, on Velocitron, he destroyed Delta Supreme, who had been rebuilt into an artillery platform. During the climax of the war in the Battle for Iacon, Blackout destroyed Beta Supreme and Eta Supreme, but was heavily injured by Beta, and he took hundreds of cycles to repair.

In the episode Transwarped, Blackout is among the member of Team Chaar attacking a space bridge to capture it and conquer Cybertron. During the battle, he descended from above, sending Rodimus Prime flying and disabling the Space Bridge with a massive shock wave. After being berated by Strika for his mistake, he apologized and reactivated the Space Bridge with another shock wave. Later, he retreated from the looming battle against the Cybertron Elite Guard under the orders of Megatron and Strika. 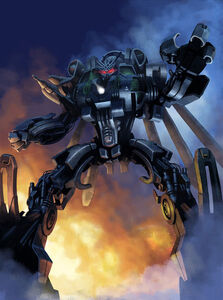 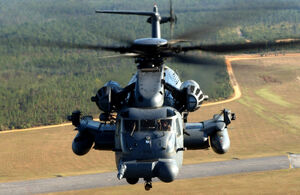 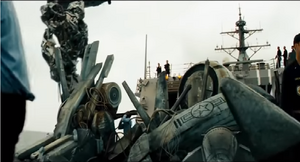 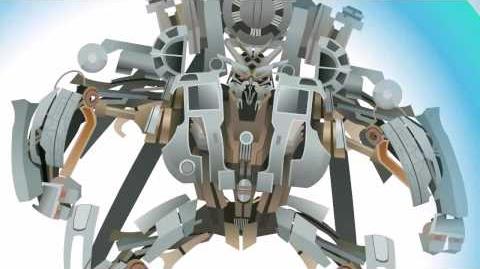