Leader of a demonic army of mutants, orcs, goblins and trolls
Dictator

Make the world ruled by mutants under his command (failed).

Blackwolf (also called the "Mutant Wizard") is the main antagonist of Ralph Bakshi's fourth animated feature film Wizards. He is an evil mutant Nazi wizard who wants to make mutants the dominant species of a post-apocalyptic Earth, with himself as supreme ruler.

He was voiced by the late Steve Gravers.

Blackwolf and his brother Avatar were the twin sons of the fairy queen Delia of the idyllic land of Montagar. They were polar opposites from birth: While Avatar was born beautiful, kind and noble-hearted, Blackwolf was born hideously mutated, cruel, and power-hungry. He shunned his mother as a boy, and spent all his time learning dark magic and torturing animals.

When Delia died, Blackwolf was excited, believing he would take over the kingdom of Montagar as her heir. He fought Avatar for the right to rule, and a battle ensued in which each brother used their full powers against each other. Avatar prevailed in the end, and exiled his brother to Scortch, a post-apocalyptic wasteland inhabited by Blackwolf's fellow mutants.

Blackwolf became the Führer of Scortch, as he soon made a vast army of mutants, orcs, trolls, goblins and gathered demons summoned from the depths of Hell to aid him as his generals to lead his monstrous minions on a quest to conquer the entire planet but the mutants were weak so they retreated from the war with the elf army of Montagar. Soon after that, he calls forth his army and told them to bring parts from lost technology of the past so that he can make war machines. But it was troubling for him because it was frustrating with his own army being in few numbers and unorganized, until he discovered old World War II propaganda, so he then ordered his troops to an assembly and made a speech with showing the secrets of war by using an old projector with reels of Nazi propaganda.

Blackwolf again made war with the elves of Montagar and with his now upgraded army they went to battle, but then the visions of war unleashed by the old projector now used as Blackwolf's secret weapon, consumed the elves and soon they were gunned down and butchered by the raging army of the Mutant Wizard and was defeated. So Avatar joined forces with the beautiful fairy princess Elinore and the loyal elf warrior Weehawk. Also joining the great elf sorcerer and his two friends is Necron 99 who is called Peace, a robot that was once Blackwolf's evil Henchman now transformed into an avenging instrument of justice. Together they set out to Scortch to defeat Blackwolf once and for all and save the world from another Holocaust.

After averting the war, Avatar and his friends entered Blackwolf's castle in Scortch One and he confronted him. Avatar begin to talk to him about a trick her mother showed him, and soon he took out a gun and shot Blackwolf twice in the chest, killing him. As Blackwolf died, his castle began crumbling down into the ground and his entire army was disbanded, ending his reign of terror once and for all. 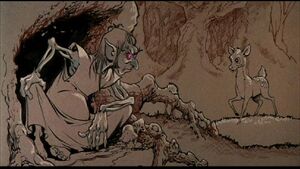 Blackwolf as a young boy spying a deer. 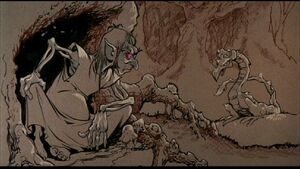 Kid Blackwolf transforming a deer into a mutant dragon-like creature. 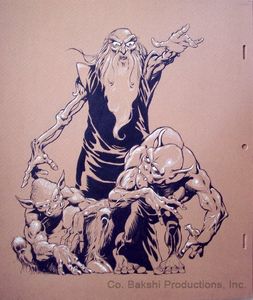 Blackwolf commanding his troops to find more reels from the past. 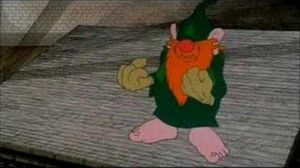