Henchman
Blade is a villain in the Masters of the Universe franchise. Although he was originally created for the 1987 live-action film, he went on to appear in both the Mattel action figure series as well as various comic books.

In the movie, he was played by stuntman and weapons expert Anthony De Longis, who also played Culluh on Star Trek: Voyager, voiced the character Zygon in the 1985 animated film Starchaser: The Legend of Orin, Klaus Furschtein in the 1987 animated film The Chipmunk Adventure, and Mick Cutler in the 2011 video game Resistance 3.

A mercenary from Eternia, Blade works for Skeletor. He first appears alongside Karg, Saurod and Beastman in Skeletor's control room when the lord of Snake Mountain gives them their marching orders. He is a tall human man with a shaved head, wearing armor and chain mail bristling with sharp protrustions. He has an unexplained grudge against Skeletor's arch-enemy He-Man, and apparently is missing one of his eyes, wearing a scope eyepatch over it, give him a slightly cybernetic appearance.

He is shown to be a highly skilled swordsman, able to last against He-Man in their fight scene. He wields two enormous broadswords as his primary weapons, although he also carries a number of throwing daggers and uses wrist-mounted dart guns as well.

Along with his fellow mercenaries and a group of Skeletor's troopers, Blade travels to Earth to retrieve the Cosmic Key and capture He-Man. The group can't locate the Key and at Karg's insistence, they attempt to capture Julie Winston for interrogation, chasing her into a warehouse near the high school she attends. However, she encounters He-Man, who protects her from the evil warriors. Blade engages He-Man in a swordfight, but loses when the heroic warrior manages to relieve him of one of his swords, evening the odds, and then throws Saurod into him, knocking him down.

Following the arrival of Man-At-Arms and Teela, the mercenaries flee and return to Eternia, where Skeletor is enraged upon learning of their failure. Blade, terrified, begs for another chance, prompting Skeletor to angrily kill Saurod. He spares the remaining mercenaries at the insistence of Evil-Lyn, and so Blade survives Skeletor's wrath and returns to Earth. On Earth, he assists Evil-Lyn in questioning Julie's boyfriend Kevin about the Cosmic Key, and he is the one who suggests tracking it from the air using their ship.

When He-Man is captured and taken back to Eternia as Skeletor's slave, Blade carries the legendary Sword of Grayskull, which proves instrumental to the villain's plan to become Master of the Universe. Blade also plays a role in Skeletor's torture of the defeated hero, using an electrified whip to flog He-Man in an effort to make him kneel to Skeletor, but the heroic warrior refuses to bow. When He-Man's friends use the Cosmic Key to teleport themselves into Castle Grayskull, a huge fight breaks out. He-Man frees himself, and Blade, unarmed, runs away, but he quickly returns with one of his swords and has a brief battle with He-Man, ending with his foe hitting him in the face with the butt of a laser rifle, knocking him offscreen. His fate after this is unknown.

Blade, like Saurod, has appeared in multiple other Masters of the Universe media.

Blade was one of the three new characters from the movie to get an action figure. He came with his two swords and had dual slashing action. In the mini-comic accompanying the toy, it is revealed that Blade (at least in the toys' universe) was given to Skeletor by en entity named the Evil Cloud. He and Saurod assisted Skeletor in attempting to steal the Cosmic Key from Gwildor, but were defeated by He-Man.

Blade appears in the comic adaptation of the movie, although both his appearance and role are quite different from the film. He has yellow skin like the toy version of Evil-Lyn (except for Beastman, all the old characters are drawn in the comic as they appeared in the toy line and cartoon). Additionally, Blade doesn't speak, with He-Man even referring to him as "silent one." He wears a grilled face mask over the lower portion of his face, a node to how he was originally depicted in pre-production drawings for the film. Because Blade doesn't speak, his role in interrogating Kevin is taken by Beastman. He also doesn't torture He-Man later. In subsequent comics, Blade is drawn more like he appeared in the film, with Caucasian skin and no face mask, and he also speaks once more.

Blade got an action figure in the Masters of the Universe Classics toy line. He was sculpted to resemble his movie counterpart more than the original toy and came with two swords (one resembling his movie ones, and one resembling the ones that came with the original toy) as well as the whip. Like other Classics figures, he was given a new biography, which identifies him as a former space pirate named Ritter.

Blade with the Sword of Grayskull. 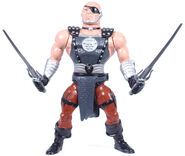 Blade's Classics figure
Add a photo to this gallery

Retrieved from "https://villains.fandom.com/wiki/Blade_(Masters_of_the_Universe)?oldid=4078080"
Community content is available under CC-BY-SA unless otherwise noted.