One of Andre Toulon's Puppets

Cut, stab and slice the enemies.

Protect the master and stay alive at all costs

Blade is The Leader of The Marionette Warriors and considered the most popular puppet among fans, and is the only puppet along with Pinhead and Jester to appear in all of the Puppet Master movies to date.

He has a gaunt pale face with seemingly empty black eye sockets and long white hair and wears a black trench coat and wide-brimmed hat.

According to David Schmoeller (director of the first film), Blade is based on one of his favorite actors, Klaus Kinski.

Blade was created by André Toulon and designed after Gestapo Major Krauss. He has the soul of Dr. Hess, a German scientist and medical doctor.

Blade was used for evil under puppet masters Neil Gallagher, Andre Toulon (in Puppet Master II) and Dr. Magrew, all three of whom he later turned against.

He was used for good under Andre Toulon, Danny Coogan, Rick Meyers, Peter Hertz A.K.A. Eric Weiss, and Robert Toulon whom he each served loyally. Blade has a sharp hook for his left hand and a knife for his right hand.

He sometimes has spike-shaped "bullet eyes" that pop out of his sockets from time to time. Blade's most common companion is Pinhead in films I-V and Curse of The Puppet Master. Blade also appears in Boogeymen: The Killer Compilation. 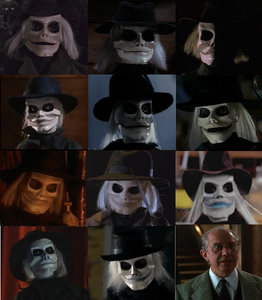 Blade in all 11 movies 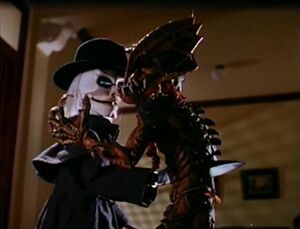 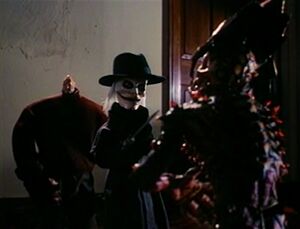 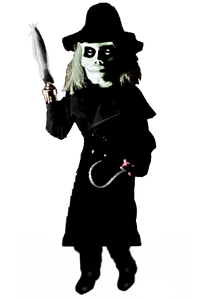 Blade in The Littlest Reich
Add a photo to this gallery

Blade's main weapons are a sharp hook in place of his left hand and a razor sharp blade in place of the right. He's been shown to be able to detach them at will; In the first film he used his blade to pin Neil Gallagher's hand to the floor then he slid the knife off his arm. In Axis Termination he replaced his hook for a small syringe attachment.

Retrieved from "https://villains.fandom.com/wiki/Blade_(Puppet_Master)?oldid=3552051"
Community content is available under CC-BY-SA unless otherwise noted.