Launching a freeze missile from his sword

To protect Scion from any invaders.

Blade (also known as "Jihad"; Kanji: ジハード) is the sub-final boss of Red Earth, and right-hand servant of Scion. He was formerly, the personal bodyguard of Leo.

He once served as Leo's personal bodyguard at his army, and was the highest ranked soliers of the army, that's it, until certain wizard woke up.

Scion, after he woke up, he decided to kidnap blade, and convert it into his hechman, by making it a flying emerald with an heavy armor and a Sword-(Jousting)Lance thing called "Adrayer"

At first he is seen with a cape, his sword and heavy armor, he's quite fast and very strong.

This is only the entrée, the real deal comes when he pulls off his cape and starts moving faster and attacks stronger. In this phase he starts using his powers, he uses his Adrayer to throw a freezee missile, that will do a considerable damage.

When his health is drained to half, Blade uses his torso to launch a mirror and catch the player like a prey, so he can do massive damage. Button mashing will do nothing exept reduce the damage.

As a last resource, if his health is fatal, he'll explode into pieces and reassembles again. The pieces damage the player but not considerably.

When confronting Leo, Blade greets him before fighting him, Leo recognized his voice, Leo was horrified for the reveal, but Blade didn't care, becase he's "no longer in mortal's world". Cue battle starts.

After he's defeated by leo, he shows remorse of the actions he did, then he revealed that he was kidnapped and brainwashed, then tranformed it into a crystal to be put out of his will, ultimately, he revealed the location of Scion before he desintegrates. After he vanishes, Leo mourns at his death, and decides to avenge Blade, by killing Scion. 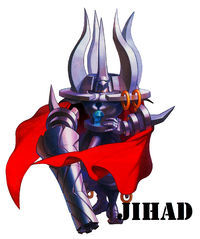 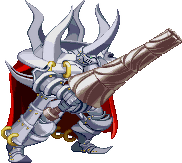 Blade, as he appears in the game 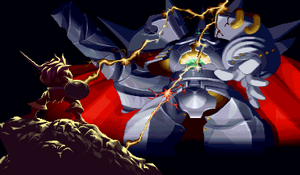 Leo and Blade in the intro of the game

you thought that he was unfair? just wait until he removes his cape... 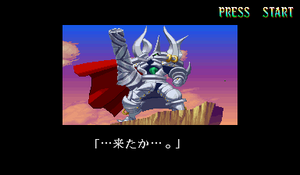 Being evil doesn't mean being bad mannered, so, he will greet any person who will confront him... and then proceed to slaughtering them... 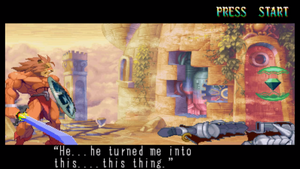 Blade decides to redeem, before dying...
Add a photo to this gallery

Retrieved from "https://villains.fandom.com/wiki/Blade_(Red_Earth)?oldid=3887220"
Community content is available under CC-BY-SA unless otherwise noted.