Second-in-command of the biker gang

Kill Peter, Stephen and Francine to take over the mall (failed)

He was a member of a motorcycle gang and robbed the mall that the protagonists had fortified against the zombies. After he was killed he reanimated and joined Big Daddy's group.

He was portrayed by Tom Savini.

Not much is known about Blades' previous life, but at some point, he joined an outlaw motorcycle gang before the outbreak.

Dawn of the Dead

When the zombie apocalypse started, he and his gang moved around from city to city and looting for supplies. At the near end of the film, he and his gang discover the mall and found out there were people inside and decided to lead assault onto the mall.

Blades survived the attack and fought against Peter and Stephen in a gunfight. Blades almost catches Peter, who escaped through the ventilation shaft, causing Blades to taunt Peter by shouting racial slurs. Peter gains the upper hand and shot Blades with his sniper rifle, sending him over the railings of the upper level where he falls into the lower level's fountain.

Land of the Dead

Years later, Blades returns as a zombie and seen as a member of Big Daddy's group. He was last seen with the zombies rampaging through the Fiddler's Green mall and was shown to be killing a man with his machete. 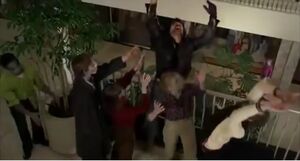 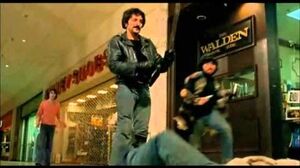 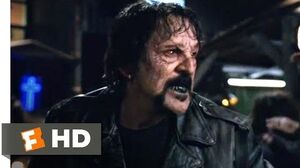 Land of the Dead (2005) - The Zombie War Begins Scene (6 10) Movieclips
Community content is available under CC-BY-SA unless otherwise noted.
Advertisement