laura_exposed (username of the Uploader of the Laura video)

Hanging out with her friends.

Avoid taking responsibility for the incident that led to Laura's death, even if it means throwing her friends under the bus (failed).

Blaire Lily is the main protagonist villain of the 2015 horror film Unfriended.

She was a friend of Laura Barns, but was the one who posted a video of her which drove Laura to suicide, and during the film allows two of her friends to be killed for self-centered purposes. Throughout the film, she plays the typical "final girl" role, but when she is the last one alive, the truth is revealed.

She was portrayed by Shelley Hennig, who is also known for portraying Stephanie Johnson on the American soap opera Days of our Lives.

Blaire Lily was born on February 22, 1997. She was a childhood friend and best friend of Laura Barns. Blaire knew that Laura had a troubled relationship with her uncle and it was assumed that he sexually abused her. Though they were best friends, Laura was known to be a bully by her classmates and she even admitted herself that she was a bully unlike her friend Blaire who kept silent about her actions until the end of the film. Blaire is also highly hypocritical, as she tells her friends not to say mean things about Laura even though she was mean herself — otherwise the meanest.

One night, after being intoxicated at a party, Laura suddenly passed out and was covered with feces, which was secretly filmed by an unknown cameraman, later revealed to be Blaire herself. The video was then uploaded onto YouTube without her consent, which made Laura a victim of cyber-bullying and humiliation.

On April 12, 2013, Laura had enough of the cyber-bullying and decided to commit suicide in a public area by shooting herself. Her suicide deeply affected everyone who knew her and witnessed it and her Facebook account became a memorial and dedication page. However, little did they know that the vengeful spirit of Laura Barns still haunts this world after she accessed a mysterious Skype account called Billie227, which she used to exact her revenge by killing those who didn't confess about posting the embarrassing video on YouTube.

On April 12, 2014, in the anniversary of Laura's death, Blaire is initially seen watching the suicide video of Laura and afterwards, she erases it from her Internet history possibly out of guilt. She is later contacted over Skype by her boyfriend Mitch Roussel and later joined by three of their friends: Jess Felton, Ken Smith, and Adam Sewell, as well as a faceless account named Billie227, who claims to be Laura.

After Val and Ken are brutally killed by the vengeful spirit of Laura, Laura forces them into a game of Never Have I Ever, threatening to end the loser's life. Through this game, she reveals dark secrets that put the friends at odds with each other. Adam becomes enraged and uses the game to force Blaire to reveal that she is no longer a virgin, having had sex with him twice. Mitch retaliates by forcing Adam to reveal that he gave a girl roofies at a party, had sex with her while she was unconscious, and then forced her to get an abortion when he found out that she was pregnant.

Blaire and Adam then receive messages from their printer, but refuse to reveal what their messages say. Mitch, angry that Blaire and Adam are apparently sending "secret messages", threatens to log off, to which Laura responds that if he does, he will die. Eventually, Blaire gives in, not wanting Mitch to leave, and shows her note: "If you reveal this note, Adam will die." Adam immediately shoots himself in the face as his screen shows his note: "If you reveal this note, Blaire will die."

After Adam's death, Laura tells them that the game is not over and she forces Jess to confess that she defaced Laura's grave. Blaire tells her not to answer her question, even though it was the only way Laura could spare Jess, which causes Laura to turn off all of the lights in Jess' house. Blaire successfully gets a woman on Chatroulette to call the police as Jess hides in her bathroom. Unfortunately, the decision to save her was too late as she chokes on an activated electric hair straightener to death.

Laura then demands to know who uploaded the video of her. After Laura privately messages Blaire on Facebook, asking who posted the video, Blaire lies that it was Mitch who uploaded it. Mitch suddenly dies when he stabs himself in the eye, leaving Blaire alone in the chat room. As Blaire breaks down crying, Laura thanks her for her help, but tells her that she must confess to one more thing. Blaire tries to placate Laura by showing her past photos of when the two were friends.

Laura uploads the humiliating video of her on Blaire's Facebook account, but in this version, Blaire is revealed to be the cameraman. The video is flooded with hate comments blaming Blaire for Laura's death. Blaire, in a state of shock, sits silently just as billie227 signs off followed by her bedroom door creaking open. Silhouetted hands appear out of nowhere and they suddenly close Blaire's laptop (as the film switches to a first-person view). Blaire silently calls Laura's name in her dark bedroom and suddenly, Laura's vengeful ghost emerges as Blaire unleashes one final scream. It is presumed that Laura personally killed Blaire as she was the one who made her life troubled the most when she was still alive.

At first, it seemed Blaire was an ordinary girl with an ordinary life. She seemed as typical a teenager as her friends with her large variety of online accounts and the way she spoke. She seemed to be the most mature of her friends as she was constantly trying to stop them panicking whenever they succumbed to Laura's fear-mongering. She appears to have a very good relationship with her boyfriend Mitch and genuinely loves him, planning to "lose her virginity" to him at prom.

However, as the film goes on, some of her more heinous and dishonorable acts are shown: it is later revealed that Blaire drove Jess' mum's car whilst drunk, crashed it and kept it a secret (until forced to confess by Laura). This demonstrated a side of Blaire that proved she would rather keep things a secret, refusing to own up to them and accept her mistakes. At this point in the movie, though Laura had exposed far more heinous acts out of the others that they had kept secret from most, making Blaire's offense relatively mild, some more terrible secrets are revealed. She'd actually cheated on Mitch once before with Adam while drunk and did it again, although they stopped the second time before they did anything more because they both realized how dangerous their actions were. Despite her adulterous actions, she was still possessive toward Mitch, pretending to apologize for her actions and experiencing self-centered despondency and sorrow upon seeing the death of Mitch and her other friends, and attempting to make amends with Laura by reminding them of their friendship in the past. Unfortunately, this isn't enough, and she still did not want to admit to Laura and to herself that it was in fact her who recorded the video of Laura Barnes drunk and passed out.

Blaire shows a rather cowardly personality: she was unwilling to own up to her crimes and confront the fear of telling the truth of what she did to Laura and how she posted the video that led to her suicide. What's more, she blamed the uploading of Laura's embarrassing video on her boyfriend in a last desperate attempt to save herself, allowing Laura to kill him. It's implied that Blaire actually posted the video herself instead of Mitch, and if so, this proved that Blaire was willing to let anyone (even someone she loved) pay for something she had done with their lives to protect herself. 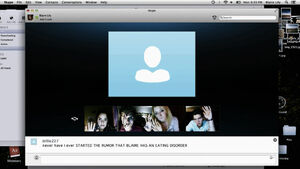 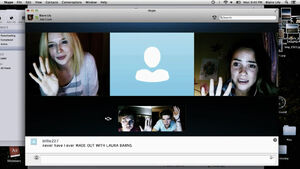