Blaise (Japanese: ホカゲ Hokage) is one of the Magma Admins of Team Magma in the Pokémon Adventures manga. He is a skilled illusionist, creating visions inside his victim's head using heat and smoke. He is, however, a little full of himself.

Blaise is one of the Three Fires, Admins of Team Magma, along with Courtney and Tabitha.

Like all of the Three Fires, Blaise has a special lighter that can transmit and record images by burning them on paper.

Blaise's specialty is creating illusions with fire and heat. Usually, the heat is enough to wear his opponents down to the point where he can easily confuse and knock out their Pokémon. He is not a very good battler, and his Pokémon often lack the strength. His skills at illusion-making often makes up for his lack of strength, however.

Team Magma raided the Slateport City Contest House to capture Captain Stern, but accidentally got Ruby and the Pokémon Fanclub President, too. Blaise tortured Captain Stern to get him to reveal how to complete Submarine Explorer 1. When this failed, he attacked Dock with his Slugma, forcing Stern to reveal the missing pieces of the submarine.

Ruby distracted Mack by luring his Slugma away with Pokéblocks. The two fought inside the submarine, where Mack's skills as an illusionist first come into play. Ruby managed to escape when his Mumu used Earthquake, endangering the submarine, Blaise, and himself.

Blaise's illusions totally incapacitated Tate and Liza on Mt. Pyre for most of the Hoenn saga, while at the same time, stealing the Red and Blue Orb off Mt. Pyre. When the Firehead Trio took off with three Gym Leaders to face off in battle, Blaise's opponent was Brawly. 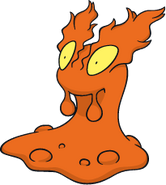