Blaster-Tron is a supporting character in the Skylanders franchise, serving as a minor antagonist and trappable villain in Trap Team, and a supporting protagonist in Imaginators. He is a robot who comes from the future.

He was voiced by Alex Ness.

After Wolfgang went to the future and sent an aged cheese to the past, he decided to take over the Skylands of that timeline. In doing so, he created Blaster-Tron. Blaster-Tron often went around the Future of Skylands to until the Skylanders appeared and so he went to fight against them, only to lose and was captured by the Trap Masters. Blaster-Tron was taken back to the past to help the Molekin known as Diggs to look for some hidden treasure.

After being stranded in the past, Blaster-Tron was reprogrammed by Master Eon and the Skylanders to help save Skylands and train the Imaginators in battle. Under his new programming, Blaster-Tron traded his gun for a sword and joined the Senseis to fight off and defeat Kaos as well as his Doomlanders and other minions. 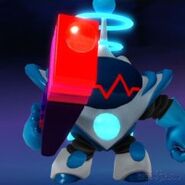 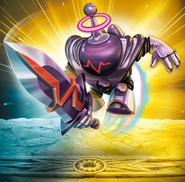 Blaster-Tron as seen in Skylanders: Imaginators.