Having sex with Samantha.

Make as much money as possible.

Obtain a syndicated series for his variety show.

He was performed by Peter Vere-Jones.

Bletch, at first, pretends to be caring and nice, but in reality, he is more of a mean and perverted man. He is also murderous, like when he ate a fish named Guppy Who tried to join the Feebles Variety Hour (but later puked him out, leaving him to die), and he killed Fly by ripping his wings off and flushing him down the toilet for giving a bad review of Harry’s sex disease. He is also very selfish, like when he dumps Heidi because how of revolting she looks and wants Samantha to be the star of the show. He even hates arachnids.

Bletch is a blue walrus who is a businessman manager who runs the show. He is Heidi the Hippo's boyfriend who tries to cheat on her by choosing Samantha as his mate. He has two minions, Trevor the Rat and Barry

Bletch first appears in his office having sex with Samantha, but was interrupted by Heidi knocking on his door and forced to hide her when Heidi enters Bletch's office and tells him that Trevor insulted her. Bletch calms Heidi down, and then she left his office.

While Bletch was going on a golf course with his henchman, a fish named Guppy calls out to him and requests to join the Feebles. But Bletch, pretending to be interested in Guppy’s own act, lies to him that he has a cavity in a molar, then eats him up. While at the golf course, he makes a drug deal with Cedric and Louie. Bletch was then forced to puke Guppy out.

He deals drugs with Cedric the Warthog and Louie. After they double-crossed Bletch to find out that the drugs were borax (which Dennis the Anteater became a victim when he sniffed up borax and died), he ordered his henchmen to kill Louie. Bletch, Trevor, and Barry set out to get the drugs at the harbor, where Cedric and his crab goons were waiting. While getting the drugs, they fight off the crab goons while Cedric pursues them. After they collected the drugs and killed the crabs and Cedric, they encounter a giant spider and bit Barry's head off, killing him. On their way back to the theater, Bletch and Trevor encounter Mr. Big, and Trevor took him out by driving Bletch's car into his mouth and exit out of his anus.

After that, Bletch dumps Heidi. Angry and heartbroken, Heidi goes on a rampage by killing everybody (except for Lucille the Poodle, Robert the Hedgehog, Arthur the Worm, Sidney the Elephant, his son Seymour, and Sebastian the Fox) with a machine gun. After Heidi kills Trevor, she sticks the gun in Bletch's mouth and shoots him after he dumps her. 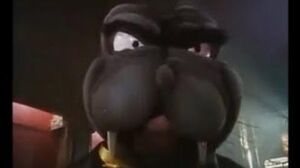 Villain Defeats- Bletch (Meet the Feebles)
Bletch gets shot by Heidi
Add a photo to this gallery
Retrieved from "https://villains.fandom.com/wiki/Bletch?oldid=3671232"
Community content is available under CC-BY-SA unless otherwise noted.