Steal the treasure map from Jim Hawkins so he and his crew can seek the location of Treasure Island (failed).

Blind Pew is a minor antagonist in the 1996 film Muppet Treasure Island. He is a member of a group of pirates who seek the treasure map from Billy Bones.

He was performed by the late Jerry Nelson.

As in the original Treasure Island, Pew is after the treasure map, accompanied by other former members of Captain Flint's crew. In contrast to the novel, where Pew's blindness enhanced his sinister qualities, his disability renders him a comic figure, his actions include him grasping at a moose head and mistaking Jim Hawkins for a girl.

In the film, Blind Pew visits the Admiral Benbow Inn to give Billy Bones the black spot, indicating that Bones will soon die. He later returns with a gang of pirates consisting of Brool, Black Dog, Wander McMooch and others, searching for Bones' treasure map. However, a lamp gets knocked over in the midst of the uproar, setting the inn into flames.

During the blaze, Pew is last seen wandering blindly through the flames saying, "I think I smell something burning, no?" His fate is unknown.

In the 2014 film Muppets Most Wanted (released 15 years after), he is seen alongside with his friend Black Dog as a gulag prisoner of Gulag 38B. In this second appearance of his, Pew does not have both of his eye-patches with him. 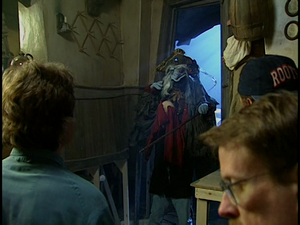 The puppeteers controlling Blind Pew in the commentary clip "Jim and Frank". 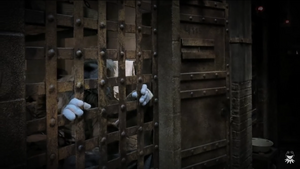 Blind Pew as he appears in Muppets Most Wanted 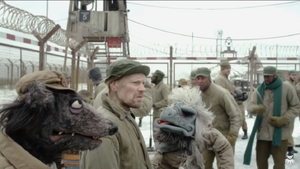