She was portrayed by Emma Caulfield.

The Blind Witch resides in a gingerbread house in the woods, which she uses to lure children into. The house itself is edible, and there are many treats inside to tempt those who enter. At some point, the witch comes to possess a poisoned apple, which she steals from the Evil Queen. One day, the Evil Queen sends two children, Hansel and Gretel, to fetch the apple from the Blind Witch, with the warning that they should not eat anything in the gingerbread house.

After entering the house, the children find the witch asleep on a chair, with the nearby table showcasing many treats. Despite Gretel's reminders of the Evil Queen's warning, Hansel, tempted by sight of the goodies, licks some frosting from a cupcake, which awakens the witch. She captures and tries to eat Hansel and Gretel, but they trick her, locking her in her own oven. The Queen, who is watching the events through her mirror, sends a bolt of fire through the mirror and lights the oven on fire, killing the witch. In the aftermath, Hansel and Gretel return the apple to the Queen.

After her death, the Blind Witch comes to the Underworld, unable to move on because of her unfinished business. She ends up running the Underworld's diner and serves the customers there. However, she faces competition from the nearby diner business, Auntie's, that Auntie Em runs.

When Mary Margaret arrives to this world in search of Hook, she enters the diner, attracting the Blind Witch's attention. Using her keen sense of smell, the witch recognizes her as Snow White and remarks that it is an honor to meet her. The witch asks if she would like gingerbread or children, but then laughs off the suggestion as a joke. Mary Margaret describes Hook to her, in an effort to find out if he is passed by recently, and while the witch correctly guesses that she is looking for Captain Hook, she admits not having actually met him yet. When Regina inquiries after Hercules' whereabouts, the Blind Witch indignantly recalls how Regina killed her by burning her alive. Regina, in turn, huffs that such a reaction is to be expected, especially considering the witch stole her apple. Dropping the subject entirely, the Blind Witch decides to call things fair, telling Regina and her allies that Hercules usually drops by the diner on his lunch break. She prattles on about her futile attempts to fatten him up, but his muscles are always bulging. Mary Margaret stops her from going off topic by asking where exactly Hercules can be found, and the witch eventually tells her that he is at the docks.

At the diner, the Blind Witch serves David a plate of toasted bread, and for Snow, a bowl of oatmeal. Snow is surprised she knows what they like to eat, though the witch points out that she knows the favorites of all the diner regulars. The Witch then leaves the counter to fetch Snow's cup of cocoa, and upon coming back, she overhears Snow talking to David about finding a way to talk to their son Neal, who is still in Storybrooke. She says there is a telephone booth used to "haunt" someone in the land in the living, but in exchange for telling them where it is, she wants something in return. Pulling out a test tube, the witch asks David to breathe into it, stating that the breath of a living soul sells for a lot in the Underworld's black market. After David obliges, she directs them to the booth in town.

In search of Dorothy's Auntie Em, who can wake a cursed Dorothy with true love's kiss, Ruby and her allies stop by the diner to ask the Blind Witch about her whereabouts. With one sniff, the witch recognizes Ruby is a wolf, but she coldly denies her service, stating dogs aren't allowed in the diner. Ruby rebukes the woman, saying no one treats her this way in her own diner, though the witch remarks that it's not hers yet. Emma presses the witch for information about Auntie Em, known as Emily Brown, who is still somewhere in the Underworld. The witch casually wonders what she gets out of helping them, to which Regina cautions her to cooperate or she'll find her customers will soon be devoured by Ruby. The witch relents, telling them of her hatred for Auntie Em, who also runs a nearby diner business, and she is the source of competition for customers. Teaming up with Cruella, who wishes to become the new Underworld ruler once Hades leaves, the Blind Witch uses her magic to trap the heroes in the library, keeping them from returning home.

After Regina fails to break open the library door with a fireball, the witch relishes over having finally given Regina her comeuppance for killing her. Cruella tells the witch that they'll have a nice eternity in the Underworld after all, and then, the two walk away in satisfaction. A short while later, Regina realizes it's not the Blind Witch's magic that is trapping them in the library, but Hades' magic. Following the heroes' escape back to Storybrooke, the Blind Witch continues running the diner. A recent addition to the Underworld, King Arthur, comes in, completely confused about where he is. When he tries to ask a young boy for information, the witch informs Arthur that the boy stopped talking centuries ago. She offers Arthur some coffee, but the latter angrily declines and demands to know what this place is. Hook provides the proper answer, to which a horrified Arthur realizes that he's dead. After Arthur reveals Hades killed him, Hook plans to get a message to Emma about Hades.

The witch interjects that this is impossible since Hades never reveals his weakness. Hook prepares an angry retort in response to her, but then, he realizes she is right, and that finding Hades' weakness is now possible since he's not in the Underworld anymore. Later, Hook and Arthur return, after finding Hades' storybook pages, but not the book itself. The witch welcomes them back, and she jokes about having smelled out the "bromance" they have going on. She suggests they get a booth to sit in, but Hook declines, since he and Arthur are here to ask Cruella about the book's location.

Like many other traditional sorcerers, the Blind Witch is able to use magic to perform a series of actions that can easily influence the reality around her (telekinesis, teleportation, element control, and many more), through the use of hand gestures, spells and potions. However, according to Regina's opinion, her magic is not very strong and every spell has an efficacy equal to half that she should normally have. 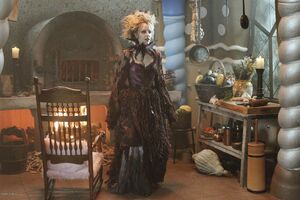 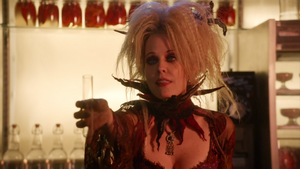 Retrieved from "https://villains.fandom.com/wiki/Blind_Witch?oldid=3461449"
Community content is available under CC-BY-SA unless otherwise noted.