Learn of Optimus Prime's whereabouts in the Decepticons' campaign to eradicate the Autobots (all failed).

Blitzwing is a minor antagonist of the 2018 sci-fi movie Bumblebee. He is a Triple Changer and a Decepticon seeker who transforms into a red/white McDonnell Douglas F-4 Phantom II.

He was voiced by David Sobolov, who also voiced Gorilla Grodd in The Flash, The Annihilator in Mighty Med, Lobo in Young Justice and Injustice, Shockwave in Transformers: Prime, Brawl in Transformers: The Game, Ripa 'Moramee in Halo Wars, and Dr. Fate in Injustice 2.

Blitzwing functioned as Diabla's handler during her time as an Autobot spy during the Great War, but was humiliated by the Autobot Bumblebee. Left for dead, Blitzwing swore revenge on the scout, and planned for years until he made it to Earth.

Amidst the Cold War on Earth, Blitwing was lead by Malingnus, and reunited with the scout in London, 1964. Unable to beat Blitzwing, Bumblebee caused a distraction with a gas main and fled, thinking that the former was leading the Decepticons on Earth.

Malingnus and Blitzwing attempted to kill Bumblebee, but were prevented by Diabla, and lost their allies Astrotrain (due to disgust of Malingnus' leadership), Runabout (who was slaughtered by Dead End under Malignus' orders). Left to fight against Diabla, he almost succeeded until he was stopped by the scout and ended up killing Dead End. Blitzwing escaped by using Dead End's corpse as a shield, and was being hunted by Bumblebee for the next two decades.

The events of this comic are non-canon to the film, as they are based around a earlier draft of the script.

Following the Autobots' evacuation of Cybertron, Blitzwing was able to trail Autobot scout B-127 to Earth, take the form of an Air Force jet and locate the Autobot all in rapid succession. He appeared overhead Agent Jack Burns’ squadron after they had surrounded his target in a clearing, confusing the Sector Seven agent as to how the Air Force had already been notified of their situation. Bliztwing didn't wait long to drop his ruse, however, swooping down from above and bombarding human and Autobot alike with missiles. Blitzwing then transformed into robot mode to attack his target directly and mostly had the upper hand thanks to his flight capabilities, but took damage to his flight systems when B-127 fought back. However the Seeker soon subdued the scout with his superior firepower and dangled him over a cliff as he interrogated him about the other Autobots' whereabouts. When B-127 refused to answer and defiantly asserted that he would "never talk", Blitzwing used an arm blade to tear his voice synthesizer out and then threw him off the cliff, making his statement "official". Confronting the heavily damaged Autobot on the ground, Bliztwing prepared to execute him as a "traitor", but was taken by surprise when B-127 tore a missile from his arm, jammed it into his chest and kicked himself away from him before firing upon the missile, blowing Blitzing to pieces.

Despite his death, Blitzwing's actions had many consequences for B-127 and the Autobot's cause. Aside from depriving him of his speech the additional wounds Blitzwing inflicted on B-127 damaged his memory cells, forcing him into stasis lock in vehicle form for several months, preventing him carrying out his mission and delaying the Autobots relocation mission. When B-127 was awakened, indirectly by the human Charlie Watson, he was rendered amnesiac and childlike leaving him in Charlie's care until his memories were restored. However this didn't happen until B-127 was nearly killed by Shatter and Dropkick, who'd alerted to B-127's location by Charlie's actions, though Shatter and Dropkick managed to learn of Optimus Prime's mission to relocate to Earth and nearly summoned a Decepticon invasion fleet. Blitzwing's actions also alerted Sector 7 to the Transformers existence and the collateral damage from his battle with B-127 caused them to view both Autobots and Decepticons as hostile (with only Jack Burns realizing the distinction after B-127 saved him from Shatter), further jeopardizing the Autobots mission on Earth.

Blitzwing was arrogant and sadistic, enjoying his attack on Bumblebee, and even mocking him for his courage, before ripping out his voice box. Blitzwing was shown to have no mercy, having no second thoughts on killing multiple soldiers, or Bumblebee. He was also shown to toy with Bee, choosing to drop him from a cliff rather than straight up killing him. This arrogance proved to be his downfall, as Bee was able to outsmart Blitzwing and kill him in their fight.

Blitwing was heavily armed, and possessed a range of missiles and explosives. He had a hand blade which he used to rip Bumblebee's voice box and had a subsonic gun. As well as his vast cattily of weapons, Blitzwing could also fly in bot mode, able to slam Bumblebee from the air during their fight. He was also strong, as he could lift Bee up with ease, and was shown to be a fearsome combatant, easily defeating Bumblebee, but only being defeated by the sheer luck of the Autobot jamming his own missile into his armor. 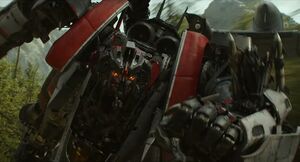 Going from jet to robot. 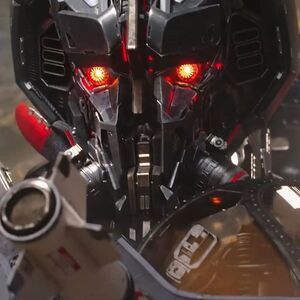 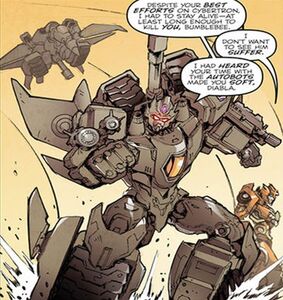 Blitzwing in the prequel comic.