To kill the unicorns for the Lord of Darkness.

Blix is a snide, prideful, and oppressive goblin who appears as the secondary antagonist in the 1985 film, Legend. He is a servant of the Lord of Darkness.

He was portrayed by the late Alice Playten.

Blix was a goblin hunter in the service of the Lord of Darkness. He had green skin, a long pointed nose and tall, pointed ears. In personality and mannerisms he was very sissy and effeminate, as he often spoke in rhymes. He was a skilled huntsman and tracker and prided himself on being the most black-hearted, ruthless, and evil of Darkness' goblins. He was an extremely opprobrious and abusive leader, often insulting or hitting his goblin subordinates. However, he did seem to have a more or less amiable friendship with pig-faced goblin Pox.

He was summoned to the Great Tree by Darkness and tasked with hunting and killing two unicorns in the nearby forest. He was promised he'd be made a prince if he succeeded. Told by his master that the only thing which could entrap a unicorn was innocence, Blix took Pox and another goblin named Blunder and chose to follow a young, seemingly innocent princess named Lily. Like all goblins, Blix considered beautiful things ugly and ugly things beautiful, and compared Lily to rotting meat - and said he preferred the rotting meat.

Lily's common lover, a forestman named Jack, knew the secret stream where the unicorns came to drink. When he promised to show them to her, Blix, Blunder and Pox followed them. They hid in the bushes. When the stallion, drawn to Lily's innocence, came forward calmly, Blix loaded an improvised dart made fron a hornet's stinger into a blowgun and shot him. The stallion bolted, followed by the mare. The goblins pursued. Neither Jack or Lily saw them or were aware of their presence.

The stallion and mare separated, and the stallion, suffering the effects of Blix's poison, was eventually cornered in a meadow by the three goblins and brought down. With a ferocious cry, Blix cut his horn off and left him for dead. With his death, the world was plunged into neverending winter. Jack and Lily became separated in the ensuing storm, and Lily went to the home of her friends Nell and Arthur, only to find them and their baby frozen. The celebratory goblins broke in to ransack the house of its food, and Lily hid in the attic.

As Blunder and Pox gorged themselves, Blix accidentally discovered that the severed horn possessed magical powers, and although all he could get it to was zap things, this greatly amused him and his friends. When Blunder tried to take credit for the stallion's death, Blix angrily declared he had shot the deadly stinger (emphasizing his point by repeatedly hitting Blunder), prompting Pox to point out that if it hadn't been for Lily, Blix wouldn't have been able to take his shot. Thus did Lily realize she was to blame, and, when the goblins departed, she resolved to follow them to "make it right."

She trailed them all the way to the Great Tree, where they made camp. Blix continued playing with the horn's power, brazenly declaring himself more powerful than their own master, the Lord of Darkness. Blunder warned him against them, and Blix set his butt on fire. Pox scolded him for wasting the horn's power, but Blix ignored him and continued ranting until the Lord of Darkness appeared. Terrified, Blix dropped the horn. Following an ill-fated attempt by Blunder to imitate Blix despite his earlier warnings to his leader, an enraged Darkness had Blunder dropped down a pit and chided the remaining two for failing to also kill the mare. Blix tried to argue that she was powerless, but Darkness said if even one unicorn lived, eternal night wouldn't come. He commanded Blix and Pox to capture the mare.

Lily ran to try and protect the mare, finding her guarded by an elf named Brown Tom. Just then, the goblins appeared. They seemingly killed Brown Tom, then captured both Lily and the mare and took them back to the Great Tree. Blix's fate following this is unknown, as neither he nor Pox ever reappear. 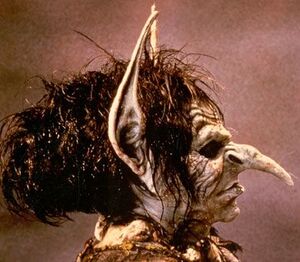 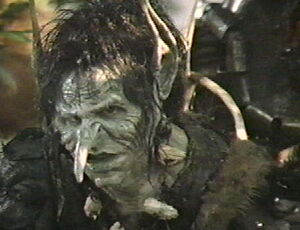 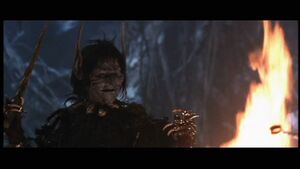