Aid Pete with his goals.

Defeat Sora and his friends

Monsters
Magicians
Elementals
The Blizzard Lord and the Volcanic Lord are minor villains in the video game Kingdom Hearts II. They are a pair of Emblem Heartless that serve Pete, while he was in Agrabah.

Both the Blizzard Lord and Volcanic Lord appear to be rotund beings, each wielding a magic scepter and sorcerer garments. Their true appearance is that of a lanky body. Both have the Heartless emblem on their belt buckle.

The Blizzard Lord's dark-colored and almost entirely enveloped in an almost transparent, blue, icy shell that makes it appear much heavier. Its black head is only exposed, revealing a pair of yellow eyes. The top of its head is decorated by ice crystals. It wears a flowing, light blue cape that attaches to a thick, black and light blue-striped collar, secured by a red gemstone. It also wears silver bracelets and a thick, gold necklace. Its lower body is covered by baggy, black pants with blue, zig-zagging patterns decorating the legs. Its feet are light blue and very small. The Blizzard Lord also wears a thick, silver belt decorated by four red gems and the Heartless symbol in its center.

The Volcanic Lord is similar in appearance, only that its translucent body is a light red-orange coloration. Its "crown" bears a resemblance to a flame tongue. Its cape appears more worn down in comparison to the Blizzard Lord's more tidy cape. The Volcanic Lord's collar is red and maroon, while secured by a green gemstone. The zigzag pattern decorated on the Volcanic Lord's belt runs in a vertical path.

Despite the two Heartless being defeated, both of them later appear while Sora and his friends were attending the Hades Paradox Cup.

The Blizzard Lord is a Heartless that can generate ice-based attacks. It can attack with it's staff, can generate ice crystals, blow ice from anywhere, and even freeze it's enemies.

The Volcanic Lord is a Heartless that can generate fire-based attacks. It can attack with it's staff, can generate fire balls, leap around and create firespots on the ground, and even burn  it's enemies. 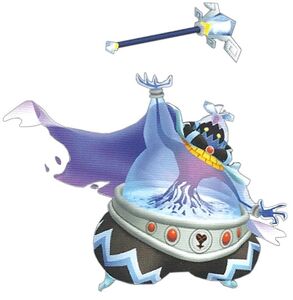 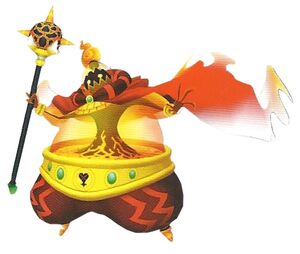