Blizzard Man is a minor antagonist in Mega Man 6, being one of the Robot Masters that was reprogrammed by Mr. X to help him take over the world.

Blizzard Man is a mostly white robot with a round torso. He has blue gear on his shoulders and feet and wears orange gloves, an orange hat and skiing equipment.

Blizzard Man is very shady and has a short temper. He loves cold and winter sports such as skiing. He dislikes snowboarding since he is bad at it.

Blizzard Man was created by an unknown inventor to monitor weather in extremely cold climates. He joined the First Annual Robot tournament, but was reprogrammed by Mr. X (who was actually Dr. Wily). His meteorological equipment was switched with a snow maker that he used to create crystals to fight with.

He fights by moving around on his skis, trying to trap Mega Man so he is forced to get hit. Blizzard Man attacks in 2 ways. The first attack has him make a group of snowflakes that fly in different directions. These will hurt Mega Man if they hit him. His second attack has him turn into a ball and charge at Mega Man.

His weakness is the Flame Blast.

He makes a cameo in the museum stage of Mega Man 7 along with the other Robot Masters from Mega Man 6.

In Mega Man Megamix, Blizzard Man is a Canadian robot who joins the first World Robot Championship in the story "The Strongest Enemy to Date". Here, he uses a snowboard instead of skis, despite him disliking snowboards in the source material. Blizzard Man later reappears in Rockman Gigamix in "Moon of Darkness", where he is defeated by Mars.

In comics made by Archie, Blizzard Man appears in Sonic & Mega Man: When Worlds Collide, seen with the other Robot Masters helping Dr. Eggman and Dr. Wily. 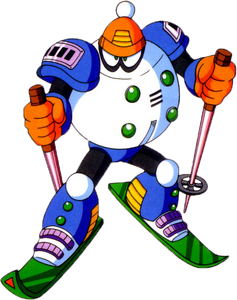 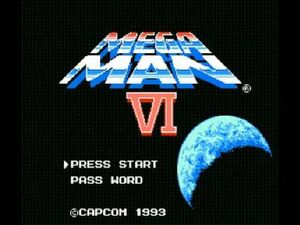